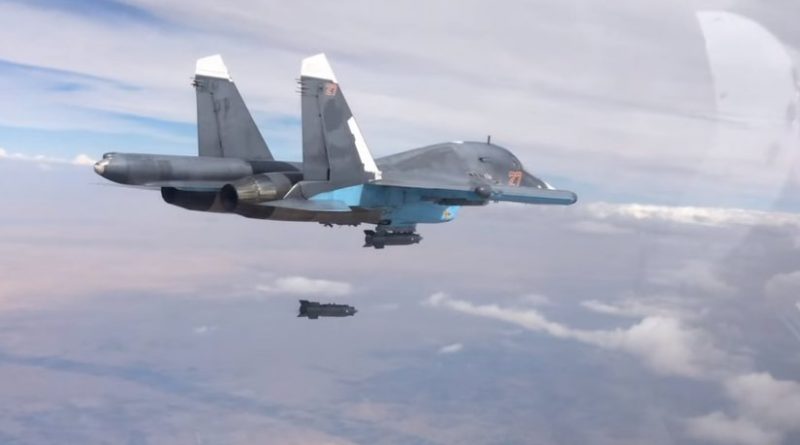 Last Thursday, the Trump administration decided to fire 59 cruise missiles from U.S. naval vessels in the Mediterranean at the Al-Shayrat airbase, an important Syrian military airbase in central-western Syria. President Trump ordered this strikes as a firm response to the Assad regime’s reported recent use of chemical weapons against civilians in the country’s northwestern Idlib province, an event that seems to have deeply impacted the President. More important than the American strike’s impact on Bashar al-Assad’s military is that the Al-Shayrat base was also host to Russian forces working with Assad’s forces.

Russia’s intervention in the Syrian civil war on behalf of the Assad regime in September 2015 has been the most significant event in the conflict. Not only does Russia provide great power support for Bashar al-Assad, it also forces the United States to engage with Russia on most all matters concerning Syria, including the U.S.-led Coalition’s current campaign against the Islamic State of Iraq and Syria (ISIS). In the wake of the strike on the al-Shayrat airbase, the Russians denounced the Trump administration’s decision, threatening to escalate their force presence in support of the Assad regime, and closing the direct “de-confliction channel,” between the U.S and Russian militaries. Assad referred to the U.S. airstrikes as “arrogant aggression,” hinting that his forces would seek to respond to the American attack.

There were no Russian casualties at the al-Shayrat airbase because the Russians were warned beforehand through the de-confliction channel. This channel is a basic mechanism of direct military-to-military communication between U.S. and Russia that was established to prevent American and Russian and Assad’s warplanes from striking each other, or each side’s local partners.

Preserving this de-confliction channel was a major concern of the Obama administration, which wanted to focus on conducting a “light footprint” counter-ISIS campaign that featured U.S. Special Forces supporting local, Syrian partners without being distracted by Russia or Assad. Through the de-confliction channel with the Russians, U.S.-led Coalition warplanes could conduct raids against ISIS without being harassed or targeted by Assad’s anti-air defense systems, often-times operated with Russian support and guidance.

U.S. close air support is a vital component of the counter-ISIS campaign in Syria, and it allows the Coalition to take the fight to ISIS working, by, with, and through local Syrian partners, which are basically militias that are coordinated into an effective fighting force under U.S. guidance. Two local partner forces, the U.S.-backed, multiethnic Syrian Democratic Forces (SDF) and its attached force the Syrian Arab Coalition (SAC), have with American-led Coalition air strikes, steadily more and more territory from ISIS in eastern Syria. Working carefully and closely with the SDF/SAC, the United States has only had to commit around 1,000 troops on the ground inside of Syria, and in the coming weeks, these local Syrian partner forces are set to begin the operation to seize ISIS’ “capital,” the central-eastern city of Raqqa.

However, as successful as the American strategy against ISIS in Syria has been up to this point, a reality that is not widely noted is that this success is the product of the general freedom of action that is enjoyed by the U.S.-led Coalition as result of Assad and Russia’s apathy. Preoccupied with the civil war raging in western Syria, where the chemical weapons attacks occurred, the Assad regime and its partners have allowed the U.S. to focus on ISIS, which is more of a long-term threat to the rule of Bashar al-Assad. However, the threat that Assad and Russia would turn their attention to the growing American military presence in eastern Syria and decide to undermine the U.S. counter-ISIS campaign, was a major concern for the Obama administration. It continues to loom over the American military effort against ISIS in Syria

A Proxy for a Proxy

President Trump is generally following the same counter-ISIS strategy is Syria as his predecessor, which means that the Trump administration is relying on local proxy forces to reduce total number of U.S. forces required to be inside of Syria. This strategy aligns with Trump’s campaign pledge to destroy ISIS and to keep the United States out of another costly occupation of a Middle Eastern country. Yet, this strategy is only as effective as the local partners that the U.S. must work with, and the freedom of action that American aircraft have to provide the vital air support that these partners need to overcome ISIS’ fierce resistance.

Assad and Russia do not need to attack U.S. forces inside of Syria, or shoot down American warplanes, which could start a chain of escalation that could result in a larger, regional or global conflict. Simply put, Bashar al-Assad and his allies can instead turn their fire on America’s partners on the ground inside of Syria, which would be a major setback, perhaps even a mortal blow, to the restrained but effective strategy the U.S. has been pursuing against ISIS.

There is already a model for how Assad and Russia could respond like this: both have conducted airstrikes either “accidentally,” or purposely, on America’s local, Syrian partner forces over the last year. In three incidents, in June 2016, August 2016, and last month, Assad and Russia have directly attacked counter-ISIS, Syrian partners, prompted a U.S. air force response to warn off further attacks. Without a reliable de-confliction channel, these one-off strikes by the regime and Russia could become part of a systematic campaign against the best Syrian counter-terrorism partners the U.S. military has fought and shed blood next to.

And this strategy of aggressive escalation against America’s best friends in Syria would likely force a response from the Trump administration, to protect local partner and to send the message that the United States will not be deterred in its mission to defeat ISIS. These responses could range from a show of force such as the deployment of U.S. Army Rangers that were sent to the northern Syrian town of Manbij to support the SDF from the Turkish military all the way to American forces returning fire to protect Syrian partners. However, these responses would be fraught with risk, the counter-ISIS campaign would be ground to a halt, and American soldiers could be killed in the escalation.

The current situation in Syria is fraught with the risk of escalation. The Syrian president has recently called American forces conducting the counter-ISIS campaign in Syria “invaders.” Bashar al-Assad and his Russian and Iranian allies have long been uneasy with the American military’s expanding presence and zone of control in eastern Syria. Now, directly attacked by the U.S. “invaders”, the Assad and his friends can try to ruin the American counter-ISIS strategy, and frustrate President Trump’s ambitions to knock the hell out of ISIS in Syria.

*Nicholas A. Heras: Bacevich Fellow, Center for a New American Security @NicholasAHeras. This article was published at Syria Comment.