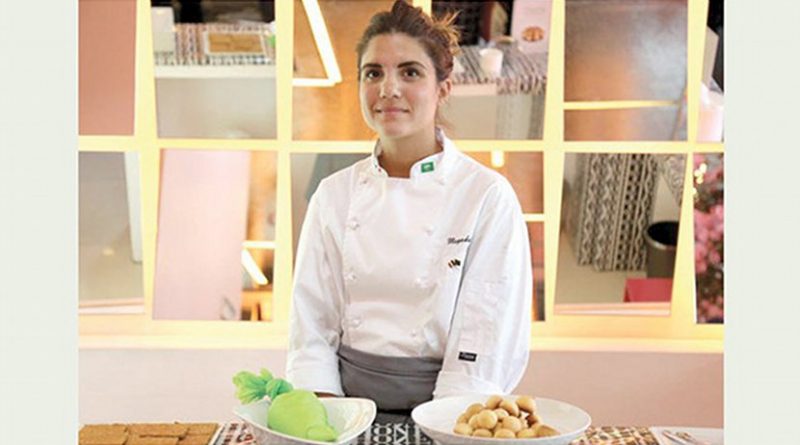 A Saudi chef delighted the guests at a gala dinner to honor Saudi-French collaboration to enhance the cultural heritage of Al-Ula with a unique taste of Arabia blended with a hint of French decadence.

“I chose a vacherin with the creaminess of ice-cream, surrounding a soft gooey center of coffee and cardamom, covered by a rose meringue, bringing a mix of Saudi flavors with a French technique,” she told Arab News.

“The French have a more sensitive palate than ours, so I used very subtle flavors.  Arabic coffee, for example, is very strong, so I used it at the base, and when the dessert is mixed, the flavors blend beautifully, complementing the rest of the flavors.”

Many of the flavors were unknown to the French, so Mayada made sure that not only would she provide the best ingredients for the selection of desserts, she brought along many from Saudi to have the team test and understand the mix of flavors.  “The guests were surprised by the kanafeh macaroons.  I brought the threads with me and the fusion was surprisingly fun, introducing the guests to the flavors and cuisine from a different part of the world.”

The feedback was positive, with a lot of “compliments to the chef.”

Many guests didn’t believe the chef was Saudi, a notion Mayada wants to change with her innovative creations.

“The feedback was amazing, everyone loved the fusion of flavors,” she said. “The dessert was a perfect example of how East meets West.  Arabs invented the ice cream originally, or bootha, and many forget that.  The West took it and perfected it in the cake, then we took it back and fused it with our flavors, combining both cultures in the sense of history.”

Dubbed the “Queen of Macaroons” in Saudi Arabia, Mayada received her culinary education at the renowned Cordon Bleu in Paris and after completing her Grand Diplome, she interned at the prestigious Laduree and Bastide de Saint Antoine in Grasse before returning to Saudi.

Her love of French pastries inspired her to open Pink Camel, a high-end French patisserie salon best known for its unique fusion of macaroon flavors.

With a seven-year career so far, her time spent in the culinary world has been eventful.  She was chosen by the renowned Parisian caterers, Potel et Chabot, to be the patissier for the gala.

Mayada’s love for the art is no surprise to many who know her.  She’s a consultant for food and beverage companies as well as a patissier and business owner.

METHOD
Italian meringue
Heat the sugar in the water until the temperature reaches 116°C. Start beating the egg whites and slowly pour in the sugar mixture. Beat for another 10 minutes and put everything in a piping bag. Make raindrop shapes and smooth them out until 2 mm thick, and leave to dry for 24h.
Halawa ice-cream
Bring the milk and cream to a boil. In another bowl, mix the sugar and egg yolks. Pour half of the milk + cream mixture into the egg mixture, and mix until completely blended. Pour over the remaining milk mixture and cook till the temperature reaches 80°C. Remove from heat and pour over the halawa paste and salt. Mix and let it rest in the refrigerator overnight before putting it in an ice-cream maker
Arabica pearl
Place the chocolate balls on a tray in the refrigerator. In a saucepan, heat the single cream, roast and grind the coffee beans and place them in a muslin cloth with the cardamom which was grounded earlier. Add the mixture to the cream and bring to a boil, let it simmer for 5 minutes, and then put it in the refrigerator for approx. 4 hours for it to infuse. Filter the mixture after 4 hours. Place the preparation on heat with the white chocolate until it melts completely. Let cool before putting it in the chocolate balls using a piping bag. Keep chilled.
Almond biscuit
In a mixer, mix all the ingredients and spread the pastry mixture on to a baking tray. Let cool in the refrigerator for half an hour, and cut it into the desired sizes. Bake the pastry mixture at 180°C until golden brown.
Whipped cream
Whisk the cream with the orange blossom essence.

ASSEMBLY
Place the ice-cream in a cone mold and insert an Arabica pearl in the center. Cover with the biscuit and freeze for approx. 4 hours. Mix the whipped cream and the remaining meringue mixture, place the preparation in a St-Honoré piping bag and cover the frozen cones. Decorate the dessert with the dry meringue and gold leaf. Keep in the freezer until it is time to serve.

From the 2017 Edition of La Crème De La Crème – European Cream & European Pastrie, published by by Cniel and the European Commission within the framework of the Cream of Europe program.