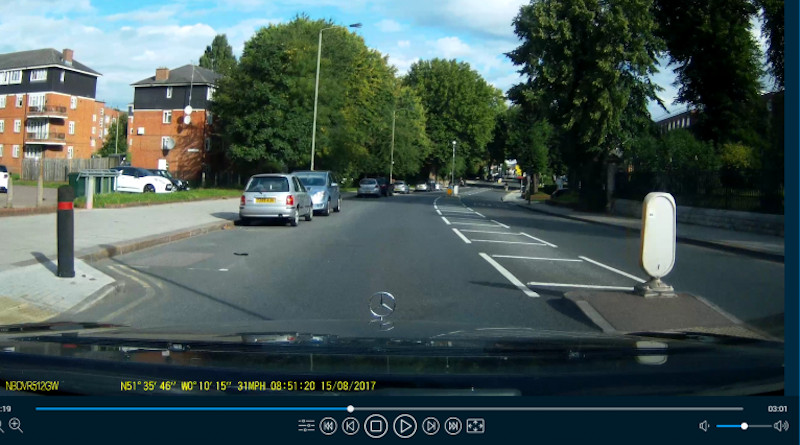 A view of a road from a dashcam replayer Credit: WMG, University of Warwick

Dashcams are vital for helping police investigate car incidents, however the way the footage is submitted to police, managed and processed can cause problems. A researcher at WMG, University of Warwick has assessed seven different types of dashcams’ SD storage systems to see how they help and hinder digital forensics.

Many cars now have dashcams, an in-vehicle mountable camera which records video and audio footage of journeys. They have significant evidential value in digital forensics as they provide GPS data, temporal data, vehicular speed data, audio, video and photographic images.

In the paper, ‘Dashcam forensic: A preliminary analysis of 7 dashcam devices’, published in the paper Forensic Science International: Digital Investigation, Dr Harjinder Lallie, from WMG, University of Warwick explores two aspects of dashcam evidence: the problems related to the management and processing of dashcam evidence, and an analysis of artefacts generated by dashcams.

It was found that all of the artefacts above are available in several different locations: NMEA files, configuration files, directory naming structures, EXIF metadata, filename structures, file system attributes and watermarks.

A number of tools were required to extract the artefacts needed from the different locations in the SD card, and to analyse them. It was also found that evidential artefacts can be synthesised using tools such as native video players, therefore better methods are required for extracting and synthesising metadata from dashcams.

Dr Harjinder Lallie, from WMG, University of Warwick explains: “We are increasingly reliant on the evidence produced by dashcam devices. However, there exist no standard guidelines on how to investigate dashcams and this can have an impact on judiciary process and the outcome thereof. This research is the first step towards developing such guidance.”

Future research will look at