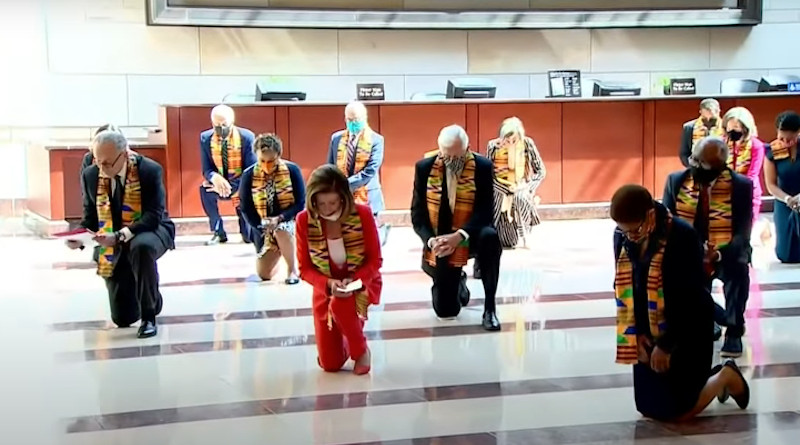 Black rebellion brings insecurity to those in power, as editors, mayors and even long dead criminals are being called to account.

Everything has changed since the world witnessed George Floyd’s murder at the hands of police. Suddenly, workers are publicly criticizing their bosses. Politicians are back pedaling and newspapers face revolts when they are caught spreading propaganda. In Europe and the United States monuments to genocidaires are defaced and pulled down.

But no one should think that the black misleaders have given up allegiance to their overlords among the Democratic Party donor class. The scoundrelsare giving lip service to change but are committed to business as usual and they co-opt the language and imagery of the movement to do it.

In addition, the movement itself is sometimes a source of confusion. While well meaning, proposals such as defunding the police are highly problematic. They do nothing to address the foundational nature of state violence and allow budgetary sleight of hand to create new methods of law enforcement. The demands for community control and abolition must remain at the top of the list.

While people of good will sincerely debate, the black political class does everything in its power to make sure that nothing much is accomplished at all. The Congressional Black Caucus pulled out their kente cloth prop and added taking a knee with Nancy Pelosi and Charles Schumer in one of the worst photo opportunities of all time.

They are proposing reforms which will never be approved by the Republican controlled Senate or Donald Trump. They are also keeping their police-empowering Protect and Serve Act in place. Protect and Serve makes assaulting a police officer a federal offense, and nearly every victim of police violence is again victimized by this spurious charge.

The chicanery must be pointed out, yet it must be acknowledged that changes are far reaching and events are occurring which no one would have predicted just a few months ago. Kente cloth charlatans are not only the ones being exposed. When New York City mayor Bill deBlasio’s daughter was arrested at a protest the police union revealed her name to the press in an effort to embarrass him. In return, deBlasio defended cops who drove vehicles into a crowd, beat protesters and bystanders alike, and even arrested legal observers from the National Lawyers Guild.

In response, New York City employees signed an open letter  to the mayor condemning his supine support of a police department which hates him. They broke every rule of politics and conventional wisdom given to employees anywhere. The dictum of never criticizing a boss has gone out the window along with everything else.

Corporate media propaganda has also taken a hit. James Bennet was the editor of the New York Times opinion page but is now without a job after a similar employee revolt. Staff were rightly angry when the Times printed an op-ed from Arkansas senator Tom Cotton , who advised sending the military to quell nationwide protests. When Times employees spoke up it was revealed that the newspaper pitched the idea to Cotton, and not the other way around. Bennet also had to admit that he didn’t even read the fascistic screed.

The “paper of record” has long been a purveyor of war propaganda and the utterances of conservatives like Cotton. But standard operating procedure isn’t good enough now and someone considered secure a few weeks ago can now be the scapegoat who gets pushed under a bus.

In Europe, thousands of people have turned out to protest for Floyd and against the United States. In Athens the U.S. embassy was the target of demonstrators. Europe has its own history of racism and condemnation of this country has inspired people to be brave about their own nations’ criminality.

Parisians marched but not just for George Floyd. Adam Traore was killed by French police in 2016 and the anger about his death never disappeared. That is why a crowd of thousands gathered to say both of their names.

Long dead criminals are also being taken to task. Belgium’s King Leopold  presided over one of the world’s worst genocides in the Congo where up to 10 million people were killed in quest to maximize rubber production. In recent days monuments to Leopold have been defaced with graffiti and red paint representing the blood he spilled. In Britain, the statue of Edward Colston was pulled down and dumped into a river in the city of Bristol. Colston made a fortune selling 100,000 Africans to colonies in the Caribbean. His name is still present in his hometown in recognition of the philanthropy that came from selling people and working them to death.

No one is safe. New York Times editors, mayors of major cities and even long dead criminals are being called to account. People have lost their fear because they are desperate and angry.It is harder to convince them that all is well when their suffering was deliberately created and their pleas for redress were ignored.

The reaction to these acts of rebellion has been all too predictable. Politicians are running scared and dare to do what they would never have considered before.  The Minneapolis city council voted to disband its police  department. But the mayor has already expressed opposition and the state of Minnesota would also have to approve. Not only can the council not deliver on their vote, but they have done nothing to bring justice to those already killed by police in that city. The movement would do well not to be taken in by unworkable schemes meant to silence them.

While the well meaning struggle with direction, the powerful see the hand writing on the wall and respond with their own kente cloth moments. The CEO of Chase, Jamie Dimon, photographed himself taking a knee, but outside of a bank vault, just in case anyone didn’t know whose side he was on. Corporations are claiming they will do better in their treatment of black employees and the NFL is making mealy mouthed apologies to Colin Kaepernick. Nike says it will donate $40 million to as yet unnamed organizations serving black communities.

All of the opportunism is the result of a mass determination to see change that benefits the people. The moment was rife as kleptocracy enriched the already rich and a pandemic decimated already shaky economies. Now white people have themselves faced the wrath of police goon squads and are now accepting proposals they would have opposed or ignored not too long ago.

There is the possibility of advancement but also of reaction. The system knows how to defend itself and how to appeal to the public. This moment requires great vigilance. The people in movement can bring about great changes. But the kente cloth wearing rascals will not disappear anytime soon.