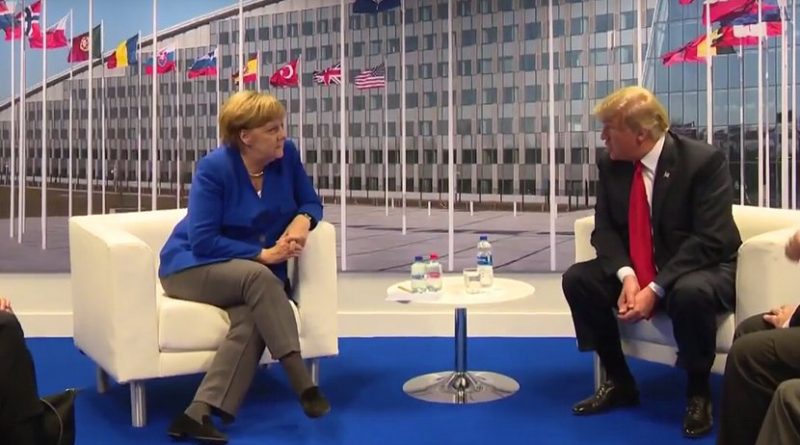 (RFE/RL) — U.S. President Donald Trump and German Chancellor Angela Merkel have met on the sidelines of a NATO summit in Brussels for hastily announced one-on-one talks just just hours after Trump lashed out at Germany over defense spending and accused it of being “captive” to Russia for energy.

Trump also insisted that he has “very good” relations with the German chancellor.

For her part, Merkel said she discussed trade and migration issues with Trump — and that she looks forward to future exchanges with the U.S. president because “we are partners.”

Trump set a confrontational tone at the start of NATO’s two-day summit, saying Germany was making natural gas pipeline deals worth “billions of dollars” with Russia while expecting the United States to “protect them against Russia.”

The dramatic exchange came during a breakfast gathering with NATO Secretary-General Jens Stoltenberg on July 11.

Trump said that Germany was “totally controlled by Russia” and “captive to Russia” because of its dependence on natural gas and deals with Moscow like the Nord Stream 2 gas pipeline.

In a later meeting between Trump and French President Emmanuel Macron, the French president said he did not agree that Merkel is beholden to Russia.

Trump has urged NATO to look into the issue of Nord Stream 2 — a project that would bring gas from Russia to Germany’s northeastern Baltic coast, bypassing countries like Poland and Ukraine and doubling the amount of gas Russia can send directly to Germany.

Washington and some European Union countries oppose the project, warning that it could give Moscow greater leverage over Western Europe.

Before their meeting on July 11, Merkel rejected Trump’s criticism of the gas pipeline project with Russia and said that Germany can make its “own decisions.”

“I want to say that I have personal experience of [living in] a part of Germany controlled by the Soviet Union and I am very happy today that we are united in freedom as the Federal Republic of Germany, and can thus say that we can determine our own policies and make our own decisions,” she said.

Stoltenberg also pushed back against Trump’s criticism, stressing that NATO is an alliance of 29 countries that have been able to work together despite their differences — and “the gas pipeline from Russia to Germany is one issue where NATO allies will disagree.”

“I think two World Wars and the Cold War taught us that we are stronger together than apart,” Stoltenberg told Trump.

Stoltenberg also said “there are different views on the Nord Stream pipeline” and that “it’s not for NATO to decide.”

“This is a national decision,” Stoltenberg said. “But NATO has, of course, addressed energy security because we understand that there is a relationship between energy and security matters. We have highlighted the importance of this diversification of supplies to make sure that our energy systems are resilient.”

The summit is shaping up to be one of the most contentious in years as Trump continues to pressure NATO allies to meet a 2014 commitment in which each member state is expected to spend 2 percent of their GDP on defense.

Based on current trends, NATO estimates that 15 member states will meet the benchmark by 2024.

NATO headquarters says the alliance is on track to increase its overall defense spending by 3.8 percent in 2018, and a total of eight members are expected to reach the 2 percent benchmark by the end of 2018.

Stoltenberg, for his part, credited Trump at their July 11 breakfast meeting for pushing NATO countries to increase defense spending — noting that European countries and Canada are expected to “add an extra $266 billion to defense between now and 2024.”

Upon his arrival at the opening breakfast, Trump said that “because of me they’ve raised about $40 billion over the last year. So I think the secretary-general likes Trump. He may be the only one, but that’s OK with me.”

Trump told reporters in Washington on July 10 the United States had “a lot of allies. But we cannot be taken advantage of. We’re being taken advantage of by the European Union.” U.S. spending on NATO “helps them more than it helps us.”

A defense spending level of at least 2 percent of GDP has long been a guideline for each NATO member state, until it was set in 2014 under President Barack Obama as a formal commitment.

NATO headquarters said the alliance is on track to increase its overall defense spending by 3.8 percent in 2018, and a total of eight members are expected to reach the 2 percent guideline by the end of the year.

Trump’s criticism has elicited pushback from NATO and European leaders in the past.

European Council President Donald Tusk chided Trump on July 10, saying “America does not have and will not have a better ally than Europe” and that the United States should “appreciate your allies — after all, you don’t have that many.”

Among responses Trump and White House officials have suggested if NATO members don’t increase their defense spending is to reduce the U.S. military presence in Europe.

Some alliance members have privately voiced concern that Trump might also pull out of major upcoming military exercises.

Trump’s criticism of the alliance has stood in stark contrast with his warm words for NATO’s main adversary, Russia.

Trump is set to meet Russian President Vladimir Putin on July 16, following the conclusion of the NATO meeting and a trip to Britain.

Asked by a reporter whether Putin was a “a friend or foe,” Trump responded: “I really can’t say right now.

Of his meetings in Brussels and Britain and with Putin, he said: “Frankly, [the meeting with] Putin may be the easiest of them all — who would think? Who would think?”

On July 10, U.S. Ambassador to NATO Kay Bailey Hutchinson and the U.S. Senate both sought to allay concerns among allies the United States was backing away from NATO, or from the alliance treaty’s Article 5, which stipulates that an attack on one member state is considered an attack on all.

In a call with reporters, Hutchinson said Trump “is committed to Article 5 protection just as it is in the NATO charter…. And I think that any indication that we’re walking away from the NATO charter and the commitments that we’ve made would be erroneous.

As Trump arrived in Brussels, the U.S. Senate passed by a 97-2 margin a motion to “reaffirm the ironclad U.S. commitment under Article 5 to the collective defense of the alliance.”

Mitch McConnell, who holds wide influence as the Republican leader of the Senate, was asked on July 10 about Trump’s threats to the alliance.

“I’m not worried about Trump pulling out of NATO,” he told reporters.

The NATO summit is also being attended by leaders of so-called NATO partner states that are not members of the alliance.

Stoltenberg said alliance leaders on July 12 will meet with the presidents of Georgia and Ukraine “to address regional challenges” and to “discuss their defense reforms and NATO’s continuing support.”

He said he expected NATO leaders to agree to invite Skopje to start accession talks as a result of a “historic agreement on the name issue” between Greece and Macedonia.

“Once the agreement is finalized and implemented, we will be able to invite the former Yugoslav republic of Macedonia to become NATO’s 30th member under its new name — the Republic of North Macedonia.”

The summit closes on July 12 with a meeting by countries involved in the NATO-led Resolute Support mission in Afghanistan.

Ahead of that meeting, British Prime Minister Theresa May announced on July 11 that Britain will nearly double the number of its forces in Afghanistan.

The deployment in response to a request from NATO would involve an extra 440 troops — bringing Britain’s total commitment to about 1,100 troops, who are assisting Afghan forces in the fight against Taliban and Islamic State militants.

Stoltenberg also said he expected the NATO summit will “agree to extend funding for the Afghan forces beyond 2020,” to express full support for Afghan President Ashraf Ghani’s “bold peace initiative,” and his government’s reforms.