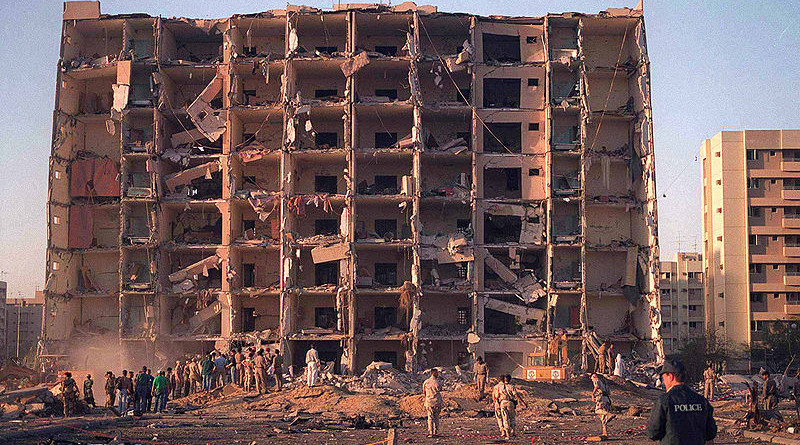 Khobar Towers bombing in Dhahran, Saudi Arabia. On June 25, 1996, a terrorist truck bomb exploded outside the northern perimeter of the U.S. portion of the Khobar Towers housing complex. The explosion killed nineteen servicemen and wounded hundreds of others, including civilians of several nationalities. Credit: DoD photo

A US federal court has held Iran responsible for the 1996 bombing of the Khobar Towers in Saudi Arabia where US forces were housed, and ordered it to pay $879 million to survivors.

The Khobar Towers was a housing complex in the eastern city of Alkhobar, near the Abdulaziz Air Base and Saudi Aramco’s headquarters in Dhahran, that housed American servicemen working on Operation Southern Watch.

A truck bomb was detonated on June 25, 1996, near an eight-story building of the housing complex. It killed 19 US Air Force personnel and a Saudi national, wounding 498 others.

The court ruled that the Iranian government directed and provided material support to Hezbollah who detonated the 5,000-pound truck bomb, a Chicago law firm press release said. The attackers reportedly smuggled the explosives used in the attack from Lebanon.

“One can understand monetary fines in the case of their ‘accidental’ shooting down of a civilian aircraft recently, but in these terrorist bombings, there should be a military response,” Dr. Hamdan Al-Shehri told Arab News. “A response that should be a deterrent. A response that should stop Iran from committing such acts of terror. Iran should not be allowed to get away by merely paying a couple of million dollars.”

He said that this attack was not the only one that had been carried out by Iran and its militias. “They have been responsible for many such bombings and assassinations. We know how they assassinated former Lebanese Prime Minister Rafic Hariri. They are yet to be punished for that heinous crime.”

He said there was no doubt about the direct involvement of Iran in that bombing. “It is good to know that the US court has confirmed what we knew all along and it is good that Iran has been finally held accountable.”

Harvard scholar and Iranian affairs expert Majid Rafizadeh said: “This is further evidence that Iran is a major state sponsor of terrorism, a destabilizing force, and is engaged in financial, political and military support for militias and designated terrorist groups across the Middle East and in the West, with the aim of exporting its extremist ideals through terror, expanding its influence and achieving its hegemonic ambitions.”

The lawsuit was brought under the terrorism exception of the US Foreign Sovereign Immunities Act by the 14 injured US airmen and 21 of their immediate family members.

The defendants in the case were listed as the Islamic Republic of Iran, the Iranian Islamic Revolutionary Guards Corps and the Iranian Ministry of Intelligence and Security.

“We will continue to seek to hold the Government of Iran accountable for this terrorist attack as long as is necessary,” said Adora Sauer, the lead attorney of MM LAW LLC.

US District Judge Beryl A. Howell found the defendants liable and awarded the plaintiffs $132 million for pain and suffering, as well as prejudgment interest, for a total compensatory damage award of $747 million and $132 million for punitive damages.

The court also said the plaintiffs were eligible for partial payments from the US Victims of State Sponsored Terrorism Fund, which compensates American victims of acts of international terrorism with funds obtained from fines and forfeitures levied against companies caught illegally laundering money for sanctioned countries and persons

The attorneys also intend to pursue enforcement of the judgments through litigation intended to seize Iranian assets.

“The physical and psychological toll on our families has been extremely high, but this judgment is welcome news,” said Glenn Christie, a retired Air Force staff sergeant crew chief who was severely injured in the bombing. “More than 20 years on, we want the world to remember the evil that Iran did at the Khobar Towers. Through the work of our attorneys, we intend to do just that.”

According to John Urquhart of the Urquhart Law Firm, which also represents the bombing victims, the explosion had taken “so much from their minds and bodies” on the day of the attack and every day and night since then. “They can now live with that balance justice provides,” he said.