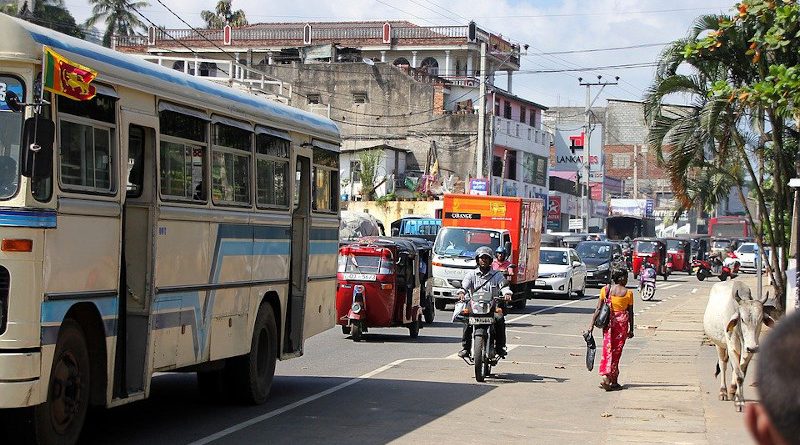 The Sri Lankan government will be amending the Animal Act after the Cabinet approved a proposal by Prime Minister Mahinda Rajapaksa to ban the slaughter of cows in this predominantly Buddhist country.  However, animal rights activists point out that there are no animal welfare laws in the country, and a bill to enact an Animal Welfare Act has been blocked in parliament since 2006.

After the Cabinet approved the proposal on September 28th the government released a statement presenting it as a rural economic self-reliance measure.

“As a country with an economy based on agriculture, the contribution of the cattle resource to develop the livelihood of the rural people of Sri Lanka is immense,” the government said in a statement. “Various parties have pointed out that the livestock resource that are required for traditional farming purposes is insufficient due to the rise of cattle slaughter and the insufficiency of livestock resource is an obstacle to uplift the local dairy industry”.

The statement further said that this decision would help to uplift the rural economy by developing a dairy industry, as well as saving a  substantial amount of foreign exchange, that is now spent on importing milk and milk powder. Immediate steps are to be taken to amend the Animal Act of 1958 and the Cow Slaughter Ordinance of 1893.

“The ban on cattle slaughter is part of the tradition of Dharmic religions” argues animal rights activist and lawyer Senaka Weeraratne. “Once these countries became colonies the ban was lifted and all three European powers Portuguese, Dutch and British freely encouraged the locals to flout tradition and Buddhist precepts by eating meat and drinking alcohol”.

When going to temple, Sri Lankans always take the Pancha Sila (five precepts) that includes refraining from killing animals and taking alcohol. But, most people on the island are strong meat-eaters and consume alcohol. Yet, in the past decade, beef-eating has decreased by over 25 per cent.

“Love and compassion for animals is growing in Sri Lanka and is a good sign of the advancement of culture and civilization.  But we must not be complacent” says Weeraratne. “This is the first time that the Government of Sri Lanka had ever withdrawn state sponsorship of a slaughter industry in Sri Lanka at the request of the Buddhist public,” he told Lotus News.

But, critics, who promote multiculturalism, argue the government is trying to reinforce the Buddhist identity of the country, ignoring the rights of other religious minorities.

Pointing out that its mainly non-Muslims (Buddhists) who sell cows to slaughterhouses, ZamZam Foundation’s  Moulavi Amhar Hakam Deen told Daily Mirror, that it is by selling cattle that these non-Muslims earn an income. Hence, they will be badly affected if the ban comes into play. “We donʼt consider this an alarming threat and injustice to the Muslim community as it is non-Muslims who are involved in the farming industry, while Muslims have been aimed as beef consumers. We wonʼt incur any losses from this because we can shift to mutton if the ban comes into effect,” he added.

To offset criticism that the cow slaughter ban is directed at the Muslim minority (who make up about 10 per cent of the Sri Lankan population), who are significant beef eaters and dominate the beef industry in the country, the government has said that the import of beef being increased and subsidised.

Venerable Omaplhe Sobitha Mahathera a long time campaigner for a ban on cow slaughter, who runs a large orphanage for saved cattle, argues that there is no need to import beef either, because, even if cattle are slaughtered elsewhere in the world, it is a sin. “Nobody dies sans beef. Therefore it is pertinent that the government also bans the import of beef” he argues in a recent media interview.

Sobitha Mahathera, who has saved hundreds of cattle from slaughter and given them to families – both Buddhist and Hindu – to use them to get milk for their families with an undertaking that they will not sell the cow to slaughterhouses, argues that the government should promote cow milk from local cows to discourage the importation of milk powder. He insisted the government should stop importing milk powder and instead provide much-needed facilities to upgrade the local dairy industry. The Mahathera said the ban would produce results from both an economic and health perspective, and therefore it was important that the government implement the move despite any obstacles to it.

Sri Lanka’s animal-friendly cultural heritage really began over 2300 years ago, when Arahant Mahinda (the son of emperor Ashoka) stopped the Sinhala King Devanampiyatissa at Mihintale, while he was on a regular hunting expedition. He preached to him Buddha’s message of compassion for all living beings. After the King embraced Buddhism, historical records tell that King Devanampiyatissa created the very first animal reservation in the world and outlawed hunting.

In spite of the long history of such a heritage, in contemporary Sri Lankan society regular media reports expose cases of immense cruelty to animals. These include animals clubbed to death for food; livestock farms in appalling conditions; Zoo animals kept caged for human entertainment; stray cats and dogs are poisoned, and captive elephants (often in temples) are severely bruised due to heavy chaining.

Thus, social critic Shenali Waduge believes that the cow slaughter ban is a diversionary tactic by the government, which is not committed to enacting an animal welfare act. “If all the (senior) monks are united, this can be done,” she told Lotus News. “ But, they are not united, and they can be bought over, except for a few”.  While the older ones “are beyond repair” the younger ones could be tapped to spearhead this campaign, she notes.

While many countries now recognise animals as sentient beings (which is at the very root of Buddhist teachings) with a “Right to Life” by law and even constitutional status, sadly Sri Lanka lags way behind. Interestingly, rather than in Buddhist countries, such laws have been enacted in recent years in predominantly Christian countries, such as New Zealand, Australia and the some European Union (EU) member nations.

EU’s welfare of farm animals act, while not banning the slaughter of animals, impose minimum standards in respect to the welfare of animals in farming, transport and killing. In Australia’s New South Wales state’s Prevention of Cruelty to Animals Act has been enacted way back in 1979.  New Zealand’s Animal Welfare Act 1999 recognizes animals as “sentient” and it is a comprehensive bill with stiff penalties for violators.

Weeraratne, who was the Legal Consultant to the Law Commission in preparation of the Animal Welfare Bill, says that 14 years after it was tabled there is no light at the end of the tunnel for this Bill. “We hope that with the banning of cattle slaughter the next logical step in the continuum would take place shortly. This Bill has to be re-introduced in Parliament in 2020 for enactment without further delay” he adds.

The welfare of animals is still governed by the archaic Prevention of Cruelty to Animals Ordinance, No. 13 of 1907, which was enacted during the British colonial era. Its maximum punishment is a mere Rs. 100 (less than $1) for a heinous crime committed on an animal. “It is a shame to think that with such low penalties captive and domestic animals can be effectively protected from harm” argues Weeraratne.

Weeraratne says that the cow slaughter ban and the enactment of an Animal Welfare Act will set a standard for other Asian (Buddhist) countries to follow suit. ”It is also a test of our national commitment, and compassion to other sentient beings,” argues Weeraratne.