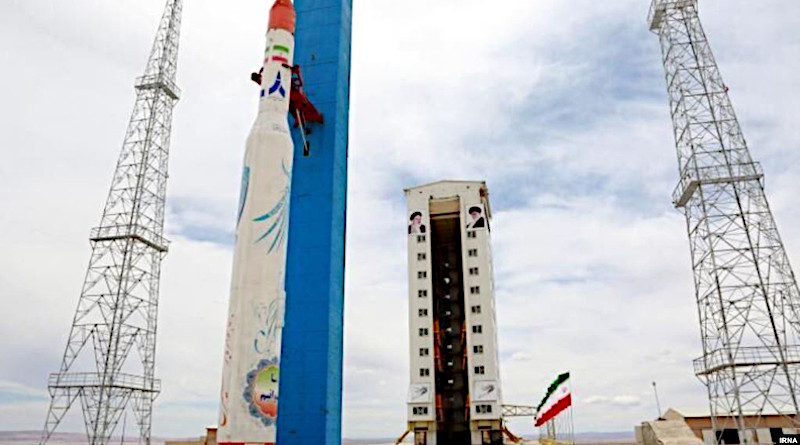 The satellite was launched from Iran’s Semnan Province, about 230 kilometers southeast of Tehran. Photo Credit: IRNA

U.S. Secretary of State Mike Pompeo said in a statement on February 11 that “the technologies used to launch satellites into orbit are virtually identical and interchangeable with those used in longer-range systems, including intercontinental ballistic missiles.”

“Each launch, whether failed or not, further allows Iran to gain experience using such technologies that could benefit its missile programs under the guise of a peaceful space program.”

Pompeo said the “the world’s leading state sponsor of terrorism should not be allowed to develop and test ballistic missiles. This common-sense standard must be restored by the international community.”

The top U.S. diplomat vowed that Washington will continue efforts to build support globally to confront Tehran’s “reckless ballistic missile activity”and that it will “impose enormous pressure on the regime to change its behavior.”

France also condemned the launch effort, urging Tehran on February 10 to abide by international obligations on its ballistic missile program.

Iran denies accusations it is using the satellite program to develop ballistic missiles.

Ahmad Hosseini, a spokesman for the Iranian Defense Ministry’s space program, told state TV that on February 9 that “the ‘Zafar’ satellite did not reach orbit as planned” because it did not reach the necessary speed, the third failed satellite launch by Iran since the start of 2019.

Hosseini still sought to portray the attempted launch as a “remarkable” achievement for Iran’s space program.

U.S. officials, who have pursued a “maximum pressure” policy toward Iran since Washington exited a major nuclear deal in 2018 that exchanged curbs on Tehran’s nuclear program for sanctions relief, have asserted that the Middle Eastern country’s satellite program uses technology that could eventually be converted to deliver nuclear warheads — accusations Tehran also denies.

On February 8, Supreme Leader Ayatollah Ali Khamenei called for further strengthening Iran’s defenses, saying that “in order to impede war and put an end to the threats, one has to become strong,” according to Iranian state Press TV.

The supreme leader, who holds the final say on religious and political affairs, meets with senior members of the Iranian Air Force on February 8 every year to mark key military defections during the country’s 1979 revolution to overthrow the U.S.-backed Shah.