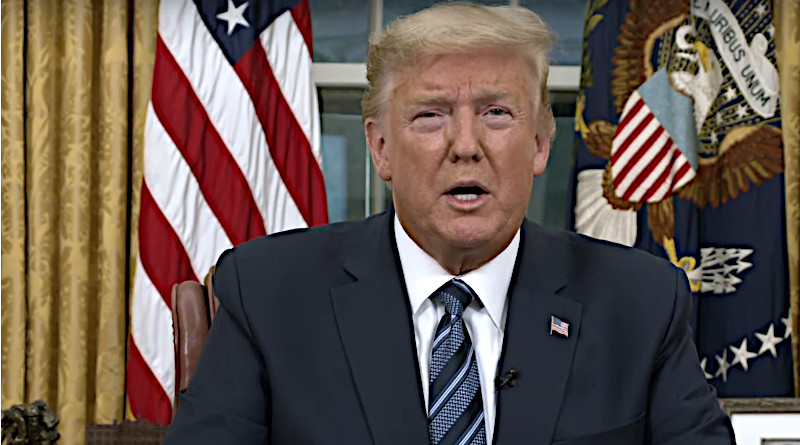 US President Donald Trump has announced that all travel from Europe to the United States will be temporarily halted for a period of 30 days, in the most significant measure yet taken to stem the spread of the lethal coronavirus.

In an address to the nation on Wednesday night, the president said the 30-day travel ban will take effect on Friday at midnight, noting that the United Kingdom would be exempt from the new restrictions.

“After consulting with our top government health professionals, I have decided to take several strong but necessary actions to protect the health and well-being of all Americans,” Trump said in the address.

“To keep new cases from entering our shores, we will be suspending all travel from Europe to the United States for the next 30 days.”

The restrictions will be “adjusted subject to conditions on the ground,” the president went on, adding that exemptions would be extended for Americans who had undergone the proper health screenings.

The measures to be put into place will be far-reaching in nature, Trump said.

“These prohibitions will not only apply to the tremendous amount of trade and cargo, but various other things as we get approval. Anything coming from Europe to the United States is what we are discussing.”

The travel ban will also bar entry to all foreign nationals who have traveled to the European Union in the last 14 days, the Department of Homeland Security (DHS) said in a statement. The measures will not apply to permanent legal US residents or their immediate family members, however.

Trump said that the US would be “reevaluating” travel restrictions his administration previously imposed on China and South Korea – the country with the second-largest number of COVID-19 cases worldwide – as the situation improves there, adding that the new conditions may pave the way “for a possible early opening” of the borders.

The number of coronavirus cases in the US has crept past 1,200, with at least 37 people succumbing to the deadly disease that has claimed at least 4,291 lives worldwide, most of them in China’s Hubei province, where COVID-19 originated. As of Wednesday, the virus has spread to as many as 42 US states, with Washington (366 cases), New York (216 cases), and California (133) being the hardest-hit. However, it is expected the number of cases will continue to snowball as the screening process is plagued by a major shortage of testing kits. At least one million kits have been allocated across the nation, and another 4 million are expected to be rolled out by the end of the week.

The outbreak, which was declared a pandemic by the World Health Organization (WHO) earlier on Wednesday, has wrought havoc at US and Asian stock markets, and led to the cancellation or suspension of major public events, ranging from popular music festival Coachella to ‘March Madness’ college basketball games that will be restricted to “essential personnel and limited family attendance.”

Home » Trump Suspends All Travel From Europe For 30 Days