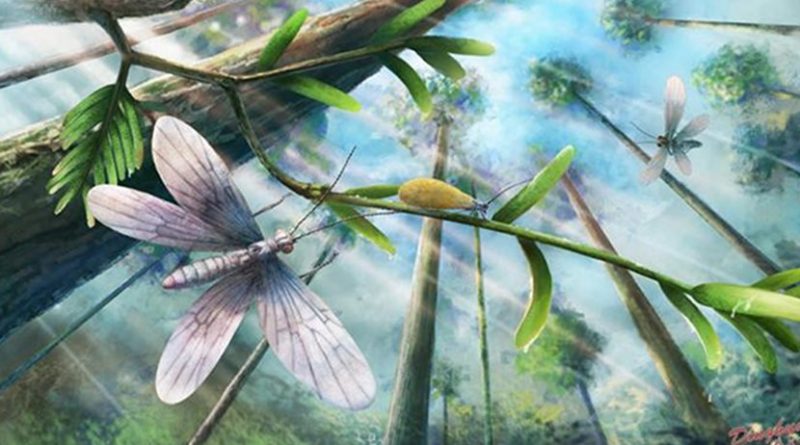 Can we know the color of a 200-million-year-old insect? Some people will say we can only imagine its actual color. But no! Scientists from China, Germany and the UK have new evidence to reveal the “true color” of fossil insects. The research was recently published in Science Advances.

Structural colors have evolved in a myriad of animals and plants and result from the wavelength-selective scattering of incident light. Such colors are typically more vibrant and visually arresting than those produced via pigmentation and are often multifunctional, playing important roles in intraspecific sexual signaling, aposematism and crypsis.

Recently, researchers from the Nanjing Institute of Geology and Palaeontology (NIGP) of the Chinese Academy of Sciences and their colleagues from Germany and the UK reported scale architectures from Jurassic Lepidoptera from the UK, Germany, Kazakhstan and China and Tarachoptera (a stem group of Amphiesmenoptera) from mid-Cretaceous Burmese amber.

Using the ultrastructural parameters identified in Jurassic specimens, they demonstrated the use of optical modeling to describe the theoretical optical properties of the type-1 bilayer scale arrangement, thus providing the earliest evidence of structural colors in the insect fossil record.

The Jurassic lepidopterans exhibit a type?1 bilayer scale vestiture: an upper layer of large fused cover scales and a lower layer of small fused ground scales. This scale arrangement, plus preserved herringbone ornamentation on the cover scale surface, is almost identical to those of some extant Micropterigidae. Critically, the fossil scale ultrastructures possess periodicities measuring from 140-2000 nm and are therefore capable of scattering visible light.

Optical modeling confirms that diffraction-related scattering mechanisms dominate the photonic properties of the fossil cover scales, which would have displayed broadband metallic hues as in numerous extant Micropterigidae.

The fossil tarachopteran scales exhibit a unique suite of characteristics, including small size, elongate-spatulate shape, ridged ornamentation and irregular arrangement, providing novel insight into the early evolution of lepidopteran scales. Combined, these new results provide the earliest evidence for structural coloration in fossil lepidopterans and support the hypothesis that fused wing scales and the type?1 bilayer covering are fundamental features of the group.

“These findings have broader implications,” said Prof. WANG Bo from NIGP, the leader of the research group. The widespread occurrence of wing scales in Jurassic lepidopterans and in tarachopterans strongly suggests that wing scales (including some possibly unknown morphotypes) were widespread in stem Amphiesmenoptera prior to their apogee in the Lepidoptera.

Given the presence of structural coloration in these basal fossil lepidopterans, the advent of major lepidopteran clades by the Cretaceous raises the possibility that this taxonomic radiation may have been accompanied by increased diversity in scale shape, microstructure and optical effects.