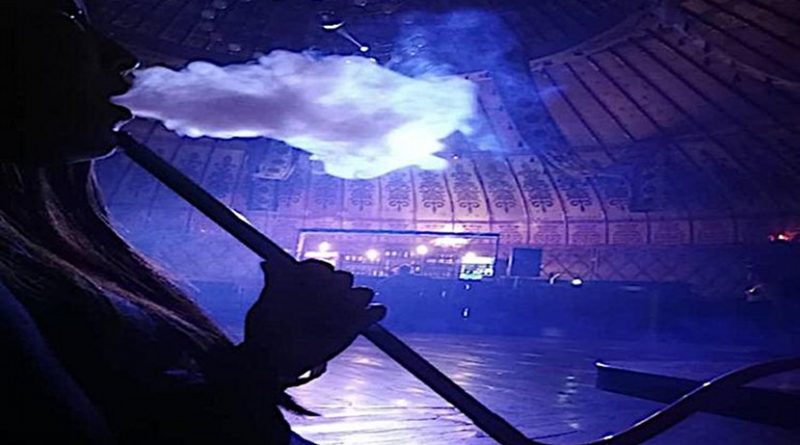 The culture of smoking hookah is becoming popular among young adults in the Central Asian countries of Kyrgyzstan, Kazakhstan and Tajikistan, because of its affordability as well as due to its being legal as a way to relax and get rid of the accumulated stress, in the absence of other forms of entertainment. Cafes and restaurants seem like an expensive choice, discotheques are almost non-existent here.

But governments are worried. In February this year, a group of parliamentarians has drafted a legislation on the protection of citizens of Kyrgyzstan from effects of tobacco use, which suggests a ban on smoking inside all buildings, except in residences, in all public places and work places throughout the country, including public transport and public cafes.

Advertising of all tobacco and tobacco goods was banned in Kyrgyzstan in 2009, but it does not mention hookah smoking specifically. The tobacco industry has capitalized on this to promote hookah smoking as product placements to promote it as a fashionable trend for young people.

In Naryn, the regional administrative centre of Naryn Region in central Kyrgyzstan – which is being developed into an education hub with a campus of the University of Central Asia opened here in 2016 – hookah smoking is becoming fashionable among the student population and a culture of smoking hookahs is being developed here among the youth.

It is for this reason that Kazakhstan banned hookah smoking in public places in 2013, and Tajikistan did the same in 2017.

Hookah, sometimes known as waterpipe smoking, is a unique method of smoking tobacco. Its origins go back, among others, to the Middle East. It consists of a head (which holds the tobacco), a body, a chamber filled with water, a hose and a mouthpiece. Charcoal briquettes are used to heat the tobacco.

It has spread over to the West in the past two decades and in recent years to Central Asia as well. Experts say the unique features of hookah may have aided its popularity among young adults; yet, it is no less dangerous to health.

Lately, new cafes being opened in Naryn town such as ‘Smoke Naryn’ and ‘Bamboo Room’ have moved to cater to this need with its fashionable hookah smoking choices.

The ‘Bamboo Room is a large and spacious venue, where everything is decorated in green and gray tones. Wooden tables are at a distance from each other and cater to the interests of both smokers and non-smokers. It also specializes in serving food rather than a hookah experience.

Apart from a variety of tobaccos for the hookah, there are also different types of tea. “Do not forget that food is the main goal for the creators of Bamboo”, says Elena Nam. “Their fruit tea, the ingredients of which remain the secret of the institution, is a must have experience”.

These cafes are popular because they offer a smoking experience, with tobacco comes in various flavors.

Aleksey, a frequent visitor to ‘Smoke Naryn’, says: “This was the first place to smoke the hookah, and felt quite civil and cozy.” He adds that tobacco for hookahs varies not only in taste, but also in strength. There are different types such as “manual” tobacco – which is the cheapest – and the “handbrake”, which has a bright taste and a lot of smoke.

“The atmosphere here is diluted by muffled music and pleasant lighting,” he adds. “Immediately at the entrance there is a bar with smoking machines.”

“The relaxing effect of smoking and the corresponding atmosphere perfectly influence the development of conversations even among absolute strangers,” says Aida Yessimova, a student at the local university.

It takes 15 to 30 minutes to consume a hookah, depending on the complexity. Places like ‘Smoke Naryn’ also offer a snacks menu to accompany the smoking experience.

The cafes here offers a variety of tobacco to use with the hookah. Beginners prefer to smoke light tobacco. Most often it is handmade tobacco. However, there are stronger varieties and famous brand such as Al Fakher (from the UAE), and Adalya (that gives a lot of smoke), and Nakhla (one of the oldest tobaccos with a long history).

“The atmosphere of this place is ideal to gather here for groups of friends,” says Valeriya, a second year student at the University of Central Asia.

The reason for a rise in the popularity of hookahs among today’s youth has long been debated. Over the past few years, this culture has achieved particular prosperity in the Central Asian countries. But, hookah smoking is not a traditional pastime here, say elders.

“Even though the hookahs became one of the main entertainments among young people, we cannot call it the part of our culture. We didn’t have this kind of tradition before,” says Aibek Aliev, the funder of one of the most popular karaoke bars in Naryn.

“Smoking a hookah has a slight effect on the smoker. Smoldering tobacco gives smokers a feeling of lightness and relaxation, allows you to get rid of unnecessary thoughts and sort the most important ones”, says Jalol Muminshoev a third year student.

“If hookah lounges were banned, I guess, we would not find any other entertainment. But it is not so difficult. We just need something that will let us spend time together, such as, PlayStation rooms, bars, or other types of lounges”, says Murodali Shairpov, one of the students in Naryn.

*The writer is a journalism student at the University of Central Asia in Naryn, Kyrgrzstan.