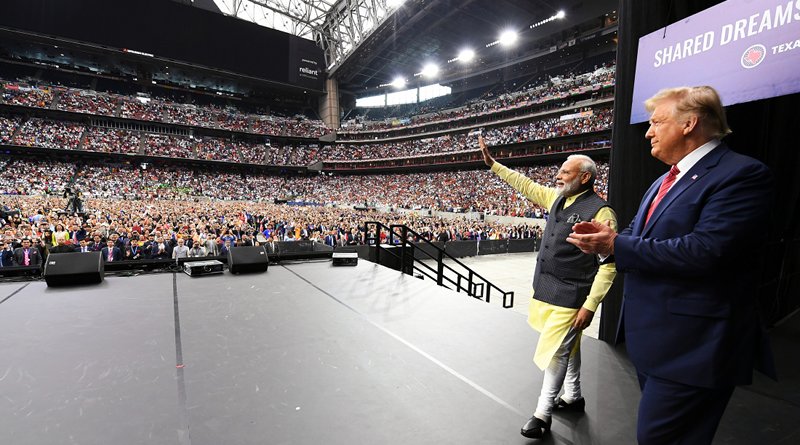 Indian Americans have traditionally voted for the Democratic Party in overwhelming numbers but many community leaders say a subterranean shift towards the Republican Party is underway in the upcoming presidential election.

Interestingly, the reason for the reported “shift” is the mother country – India. How the two candidates and their political establishments deal with India in terms of policy has become an important criterion for support this election cycle.

On one side is data driven analysis by Democrats and on the other are Zoom meetings, WhatsApp groups, and word-of-mouth. Yet, the top Democrats are worried enough they are taking steps to address any potential shift of votes by organising more events aimed solely at Indian Americans rather than treat them as a small part of the larger Asian American and Pacific Islander community or AAPI.

In the narrative about the “shift,” the incumbent, President Donald Trump, is seen as a strong friend of India while Joe Biden, the presumptive Democratic Party nominee and former vice president, is viewed as being under the influence of forces unfriendly to India, mainly the party’s “progressive” wing. Trump’s enthusiastic presence at two big rallies with Prime Minister Narendra Modi in Houston and Ahmedabad impressed Indian Americans, especially the older generation voters.

On the other side, Biden’s “Agenda for Muslim-American Communities” in which the candidate criticised India’s actions in Jammu & Kashmir irked many Indian Americans, including life-long Democrats. They see the criticism, which is mild compared to what Indians themselves have leveled against Modi, as “interference” in India’s internal affairs and an attack on India’s “sovereignty.”

It’s undeniable that domestic Indian politics and the Hindu-Muslim divide have become issues to an extent never seen before in a US presidential election. Since last year, left wing groups and Muslim organisations have been targeting India in the US Congress, in city councils and state legislatures on the Kashmir issue which has further divided the Indian American community along religious lines, splitting the support base of the Democratic Party.

For the first time, the Democrats may have to fight for the Indian American vote, especially that of the older generation. The younger generation remains firmly with the Democratic Party. It is in fact in the forefront criticizing India, something that also deeply irks the “uncles and aunties” as the first generation is jokingly called.

Democratic Party strategists have got the message loud and clear. Attempts are being made to plug the breach. There is more outreach, more campaigning at the grassroots level and more targeted advertising. Last month the Biden campaign released an ad blitz in 14 Indian languages clearly influenced by political slogans in India.

In a first for the party, candidate Biden will address the community on August 15 – a date chosen with great care – along with his senior advisors Tony Blinken and Jake Sullivan both of whom are expected to get top positions in his administration should he win. The party is clearly going beyond Indian American fundraisers where the rich drink to each other’s health to the wider community outside Silicon Valley and Wall Street.

Research shows that 52,194 Indians gained US citizenship in 2018, second only to Mexicans and became potential voters. Indian Americans are the third largest group in the larger Asian American population after the Chinese and Filipino.  In 2016, a whopping 77% of Indian Americans voted for Hillary Clinton. After Trump’s victory, 37% said they had a “very unfavourable” view of him, according to a Post-Election National Asian American Survey conducted by Karthick Ramakrishnan, a professor of political science and public policy at the University of California.

But something has shifted over the last three and half years of the Trump presidency. Despite his disruptive foreign and domestic policies, he has supported India on most key issues, offered to sell weapons that previous administration had denied, cut military aid to Pakistan, helped secure the release of the Indian pilot, Abhinandan Varthaman from Pakistan and has strongly supported India in its current border standoff with China.

For Indian American supporters, Trump’s refusal to get into India’s internal affairs tops the list of admirable traits that must be rewarded. His open embrace of Hindus has also helped – he was the first presidential candidate to attend a rally organised by a group called “Republican Hindu Coalition” in New Jersey in 2016. It led to the slogan “Ab ki baar, Trump sarkar” for his ad campaign.

In fact, this year a new group calling itself “Hindus4Trump” is making waves in some states, claiming attendance by 100,000 Indian Americans at a recent virtual rally for the president. The claim can’t be independently verified but organisers insist 30,000 people watched it live on various social media platforms while 70,000 watched it shortly after.

Raj Bhayani, one of the co-founders, told me that the group is not against Muslims or what Biden says to support them. But Biden has made no appeal to Hindu Americans. “Where’s his agenda for us?” The Biden campaign is unlikely to change its lexicon – if anything the left wing prefers the label “South Asians” rather than Indian or Pakistani American.

Interestingly, Indian American supporters of Trump dismiss his actions against H-1B visas, green cards and Indian students as temporary political moves which don’t have any real impact since international flights are largely suspended and travel is limited because of the Covid-19 pandemic. “Once the Corona virus is gone and flights resume, things will be back to normal. What’s the point of giving visas when colleges are closed?”, a Trump supporter asked.

The Democrats have the exact opposite view of Trump’s visa policies. Ambassador Richard Verma, a well-respected policy advisor, called Trump anti-immigrant and “flagrantly racist” at a virtual rally last month. He said Trump had treated Indian students and green card holders poorly and pulled up the “welcome mat.”

The Democratic Party’s list of pro-India policies includes Biden’s strong support for Indo-US civil nuclear deal, which Verma says wouldn’t have gone through if not for the shepherding by then Senator Biden who was chairman of the Senate Foreign Relations Committee.

They also cite the fact that former president Barack Obama visited India twice, including as the chief guest at the Republic Day parade. He was the first US president to be invited as chief guest. Obama also became the first US president to support India’s bid for a permanent seat in the UN Security Council and declare India a “major defence partner” of the US to allow for transfer of sophisticated weapons and technology.

But over the past year, Democrats have got attention for attacking and criticizing India more than for supporting it. Many Democrats have strongly criticised Modi’s policies in Kashmir and his Hindutva philosophy. They have held Congressional hearings, which many said were driven by special interest groups, not by a genuine need for inquiry.

Younger, left-leaning, social justice Democrats have made India and Modi’s policies a special target. That Indian American members of the House of Representatives – Pramila Jayapal and Ro Khanna – are in the forefront of the attacks has angered many community leaders.

Democrats defend the spotlight on India’s human rights record. They say friends should be able to have frank conversations with each other about differences. They remain confident that a majority of the 2.5 million Indian American voters will go for Biden in keeping with the tradition.

But there is no question that today the Democrats have an “India problem” just as Modi has a “Democrat” problem.