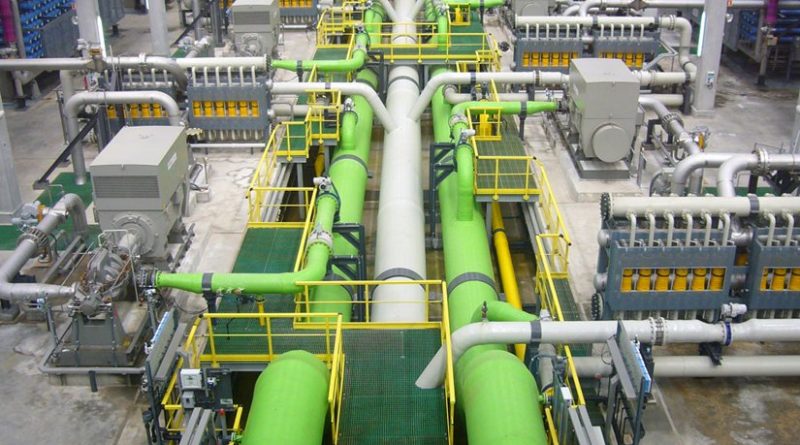 Water is a source of life, and while the world has a total of 1.65 billion km3 of water only 0.3 percent of this total quantity is theoretically usable as fresh water, and only 10 percent of that i.e. 0.03 percent of the world’s water is capable of economical utilization.

Of the world’s water, 97.5 percent is salt water from its oceans. Only 2.5 percent is fresh water. Of that 2.5 percent, approximately 69 percent is frozen in glaciers and ice caps, leaving less than 30 percent in fresh groundwater (swamps account for another 1 percent). The notion that water is a freely available resource will no longer be encountered anywhere in the world in 20 years time. It is for this reason the importance of looking at worldwide sea water desalination, which has been a very effective and economical way of producing potable water for drinking and industries. It is a myth that, sea water desalination is exorbitantly expensive, and indeed it is affordable.

Desalination or desalinization or desalting is a process that removes minerals from saline water to produce fresh water from seawater or brackish water. More generally, desalination may also refer to the removal of salts and minerals as in soil desalination, which also happens to be a major issue for agricultural production. Salt water is desalinated to produce fresh water suitable for human consumption or irrigation, with one potential byproduct of desalination being salt. Desalination is used on many seagoing ships and submarines. Most of the modern interest in desalination is focused on developing cost-effective ways of providing fresh water for human use. Along with recycled wastewater, this is one of the few rainfall-independent water sources.

Desalting is actually a natural, continual process and an essential part of the water cycle. Rainwater falls to the ground and eventually flows to the sea, moving over and through the earth, dissolving minerals and other materials along the way, and becoming increasingly salty. As water evaporates through the sun’s energy, it leaves the salts behind and the resulting water vapor forms clouds that produce rain, thus continuing the cycle.

Desalination is particularly relevant to dry countries such as Australia, which traditionally have relied on collecting rainfall behind dams to provide their drinking water supplies. According to the International Desalination Association, in June 2011, 15,988 desalination plants were operating worldwide, producing 66.5 million cubic meters per day, providing water for 300 million people. This number has been updated to 78.4 million cubic meters by 2013, or 57 per cent greater than just 5 years prior. The single largest desalination project is Ras Al-Khair in Saudi Arabia, which produced 1,025,000 cubic meters per day in 2014, although this plant in Saudi Arabia is expected to be surpassed by a plant in California. The largest percent of desalinated water used in any country is in Israel, which produces 40 percent of its domestic water use from seawater desalination.

Due to relatively high energy consumption, the costs of desalinating sea water are generally higher than the alternatives (fresh water from rivers or groundwater, water recycling and water conservation), but alternatives are not always available and rapid overdraw and depletion of reserves is a critical problem worldwide. According to Christopher Gasson of Global Water Intelligence, “At the moment, around 1 percent of the world’s population is dependent on desalinated water to meet their daily needs, but by 2025, the UN expects 14 percent of the world’s population to be encountering water scarcity. Unless people get radically better at water conservation, the desalination industry has a very strong future indeed.”

Desalting technologies can be used for many applications. The most prevalent use is to produce potable water from saline water for domestic or municipal purposes, but use of desalination and desalination technologies for industrial applications is growing, especially in the oil and gas industry. Through the mid-1900s, the most commonly used techniques involved evaporation and distillation. The development of desalination processes took a major step forward in the 1940s during World War II, when military establishments operating in arid areas needed a way to supply their troops with potable water.

By the late 1960s, commercial desalting units producing up to 8,000 cubic meters per day (m3/d) – approximately 2 million US gallons per day – were beginning to be installed in various parts of the world. Most of these installations used thermal (distillation) processes.

In the post-war years, however, scientists began studying osmotic processes to desalinate water. The first reported use of the term “reverse osmosis” – now a popular desalination technology – appeared in the US Department of Interior’s Office of Saline Water Commission 1955 annual report. Development continued, and in the 1970s, commercial membrane processes, such as reverse osmosis (RO) and electro dialysis (ED), began to be used more extensively. Since ED could desalt brackish water more economically than distillation, more interest was focused on using desalination as a way to provide water for municipalities with limited fresh water supplies and the availability of brackish water sources.

Nowadays, desalination has become a very affordable solution to cope with fresh water shortage typically in tropical as well as of off-shore areas. The desalination core process is based on Reverse Osmosis Membrane technology, but stands alone, it doesn’t provide safe drinking water, nor does it guarantee an efficient plant.

The pretreatment includes the entire necessary treatment step ahead of the reverse osmosis plant. It is determining for plant life time and to minimize chemical cleaning and membrane replacement. It has a direct impact on the plant performance. There are as many membrane types as applications. They range from “high rejection” to “ultra low energy” or ” high boron rejection”. The can also be built with one or two passes, depending on the product water requirements and the seawater salinity and temperature. In most cases, 1 pass is sufficient to reach the EU drinking water standards, especially regarding the boron content (1 mg/L). To reach WHO boron guideline (0.5mg/L), a second pass might be necessary (Boron removal process). The energy recovery device is the key factor that determines the plant electrical costs. It must be chosen carefully based on the local energy costs and environment policies.

Post-treatment and/or polishing steps are required to condition the water after the reverse osmosis membrane process to make it suitable to your application.
Brine disposal can be an environmental and economical issue in some areas where the fauna and flora are sensitive to local seawater salinity increase. Brine disposal should be studied and engineered case by case. The art of desalination is to determine and combine available technologies to optimize water production costs and quality.

Today, developments in desalination technologies are specifically aimed at reducing energy consumption and cost, as well as minimizing environmental impacts. Advancements include such new and emerging technologies as forward osmosis, low temperature distillation, membrane distillation, pressure retarded osmosis, biomimetic and graphene membranes. Hybrid plants (especially those using MED) and reverse osmosis are gaining wider use in the Middle East, which has traditionally been home to facilities using more energy-intensive thermal technologies such as MSF.

There is also a push to utilize renewable energy to power desalination plants. For example, Saudi Arabia has made a major investment in solar energy for desalination. In addition, Masdar has organized a program to pilot and help commercialize new energy saving technologies for desalination.

The desalination industry is also paying a great deal of attention to environmental considerations. Environmental safeguards have become increasingly important in siting and permitting of new plants. Monitoring programs are being more widely utilized. Lower energy consumption reduces also a plant’s carbon footprint, and in addition, new technologies are being used successfully to lessen disruptions to marine life during the intake and outfall processes. Studies such as IDA’s Blue Paper on Desalination and the Gulf have raised awareness of steps to leverage best practices and mitigate potential environmental effects of desalination.

Need of the Hour:

While energy consumption has been significantly reduced in the past two decades, IDA’s Energy Task Force has specifically challenged the desalination industry to achieve a further reduction of 20 per cent in energy requirements for seawater desalination by 2015.

The current technology available for Desalination plant through Reverse Osmosis System has proven to be cost effective and easily maintainable. With proper process design and efficient conservation of energy sea water Desalination system with Reverse Osmosis can be a long-term solution at an affordable price. With technologies to save power such as “energy recovery turbines” cost per ltr of Desalinated sea water to potable water can work as low as US$0.001 per litre, including cost of running, maintenance and power. No doubt technologies for addressing this issue exist and have been successfully used in various countries; their deployment on sufficient scales in India continues to be a great challenge. Currently, India has taken up with the ides of Swachh Bharat which includes Clean Ganga and other water bodies as essential elements. Adoption of various technologies as well as strategies for their implantation on a large scale and high speed that we need and be considered as an integrated ecosystem oriented protocol.