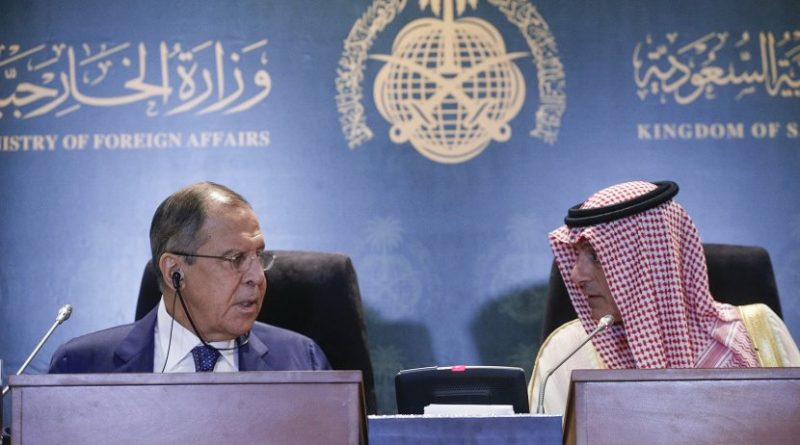 Relations between Russia and Saudi Arabia are trapped in a challenge that can hardly be overcome in the short term. A close ally of the US for many years, Saudi Arabia is at the forefront of American influence even as it is being pitted against Russia on many issues in the region.

In the recent Gulf crisis, many considered that Russia appeared to be on the side of Qatar, as Doha and Moscow have succeeded in building strong and successful economic, business and political relations in the past years, which have been mutually profitable for both states. Russia also has strong ties with Iran and is looking forward to strengthening them further.

Vladimir Putin has visited Riyadh once, in 2007. The invitation to visit Moscow had to wait for 10 years for different reasons. Previous expected visits were canceled by one side or the other — keeping bilateral relations in a bit of an up and down cycle. The reasons for cancelations were numerous, including the lack of a positive agenda and common ground, and an insufficient number of agreements and projects to discuss that could make the visit useful.

The Syrian conflict, which has had a deep impact not only on the region but the whole world, has placed Moscow and Riyadh on different sides of the spectrum and their positions have not moved closer in the past six years. Even despite what many describe as the visible success of the Syrian Regime, which has achieved victories thanks to significant support of few but influential allies, Riyadh seems stands strong on the same positions that it held from the start: Assad has to step down and he has no political future in Syria.

This position was restated by Saudi Foreign Minister Adel Al-Jubeir after his talks with his Russian counterpart on Sunday in Jeddah. Al-Jubeir also said Riyadh wants to end what he called Iran’s meddling in the Middle East. Positive evaluations of the Astana peace talks, sponsored by Iran, Russia and Turkey, were nearly subjected to another dose of criticism as Iran has a hand in them. Riyadh was against widening of the list of participants in the talks in the Kazakh capital.

Moscow believes the fate of Assad must be decided in a free and democratic election. Moreover, Iran is a vital partner — regardless of the fact that it is clearly complicating the regional situation and Syria’s war settlement and taking into account the deep concerns of some of its neighbors (that are sometimes expressed with air attacks on Assad’s forces along the borders). These are the toughest remaining contradictions that despite being referred to by Lavrov as surmountable, remain hardly solvable if only one side is willing to make serious concessions.

Moreover, Lavrov’s visit is predetermined by a need to figure out the Saudi stance on the ongoing peace processes in Syria, whether there is room for change in Riyadh’s position, and the possible scenarios resulting from the Saudi position.

Lavrov’s visit to Jordan, which follows his visit to Saudi Arabia, is not accidental. Jordan has gained a unique status in the region as a guarantor of peace and stability, having taken the most pragmatic and reasonable positions. The peace process developing now in Syria has become possible largely thanks to Russia’s cooperation with Jordan establishing the peace zones. With Jordan, Moscow has succeeded in establishing strong and reliable ties, based on mutual respect and cooperation on reaching common interests and establishing vital stability in the region without any conditions.

This outcome has yet to be reached between Saudi Arabia and Russia. At the moment they share common ground in the field of energy resources — with both countries interested in keeping the price of oil at acceptable levels. Both have a strong incentive for cooperation in technology and science fields, as Russia’s achievements and possibilities in these fields may be attractive for developing the science cities, which are one of the pillars of the SaudiVision 2030.

Investment projects and trade agreements are also possible, and may be mutually profitable. But whatever the economically profitable agreements are, the Kremlin will hardly change course when it comes to politics in the region, as this is determined not only by geopolitical ambitions, but also by vital national interests.

Russia is gaining ground in the region and has serious political achievements, having — I believe — outplayed the West and its regional allies. The ongoing rapprochement between Russia, Qatar, Turkey and Iran is becoming a game changer in the region and globally, guaranteeing to the quartet strong positions, even while each is under extreme pressure from the others. And the stronger the pressure on them, the closer they become, forming a truly threatening force for the interests and games of the regional players and the West, which is on the other side of barricades. Their unity is their guarantee for their own safety. And for Russia it is a guarantee for the fastening of its regional positions and, potentially, progressive strengthening of its influence in the Middle East.

Russia-Saudi relations can successfully develop only if both sides learn to put their eggs in different baskets and do not ask for benefits in one field in return for concessions or bargains in the other. Politics is politics. Economy is economy.

One thought on “Saudi-Russian Relations And Regional Challenges – OpEd”