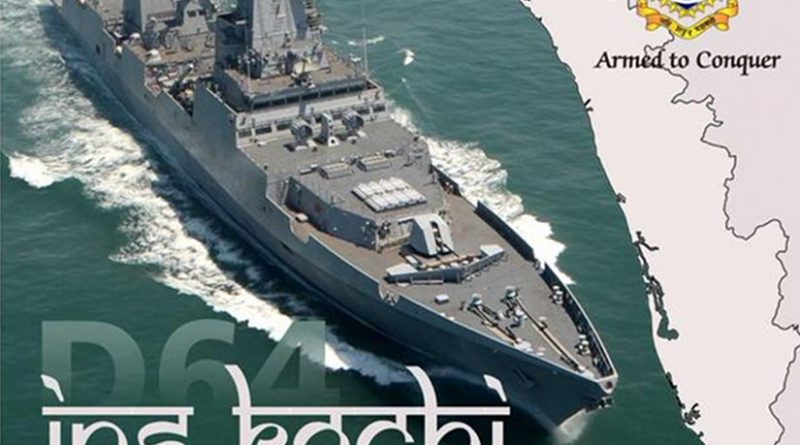 The recent commissioning of the INS Kochi has triggered a debate about the desirability of building big warships. At 7,500 tonnes, the Kochi is one of the largest guided missile destroyers ever assembled by an Indian shipbuilding yard. Fitted out for a multi-mission role in the Indian Ocean with armament comprising Brahmos cruise missiles, long Range Surface-to-Air Missiles (LR-SAM), anti-submarine rockets, and torpedoes, the ship is easily the most sophisticated and powerful capital combatant to have graced the Navy’s fighting fleet.

This is the second big Indian destroyer to have been commissioned in the past fourteen months. In August 2014, INS Kolkata, the lead ship of the P 15-A class, joined the Western fleet at Mumbai. The excitement surrounding the commissioning of the two destroyers followed the enthusiastic averment of political leaders and strategic experts who sought to portray the new assets as India’s ‘battleships’ meant to assert strategic dominance in the Indian Ocean.

Not everyone is convinced of the ships’ operational utility though. Following the Kochi’s commissioning, critics of big-ship construction raised doubts about the economic logic of acquiring expensive behemoths. High cost, time delays, expensive maintenance schedules and superfluous capability add-ons, they pointed out, make large warship construction a particularly profligate activity. Given the construction cost of over Rs. 4,000 crores, sceptics wondered if the new class of ships could deliver value for money, particularly when the navy is vulnerable to the vagaries of budget cuts and is in no position to build more expensive combat platforms.

Critics have a valid point. With a peacetime mission comprising of primarily constabulary, humanitarian assistance and diplomatic flag flying deployments, the navy is unlikely to find ships of the size of Kochi very useful for such missions in the Indian Ocean. With the bulk of its operational energies spent in conducting coastal security and non-combatant evacuation missions – such as the operation in Yemen earlier this year – the navy already has a problem of sophisticated warships performing low-end tasks. The suggestion then that, in place of large redundant war-vessels, the country must focus on building light frigates, patrol boats, and utility craft for surveillance and constabulary duties does appear to have some merit.

Navalists, however, summarily reject modest estimations of the big warship’s utility in peacetime operations. Proponents of ‘battleship’ construction claim that giant warships go well beyond fighting decisive battles in conflict. By their very nature, they are also a political tool in peacetime. Besides fighting enemy ships in a conventional engagement, large warships are meant to signal political resolve by assuming a forceful posture in distant maritime theatres. Supporters also make the ‘power–projection’ argument. By virtue of their sophisticated design and fearsome looks, modern destroyers have the capability to project both fire and fear at much greater distances. Their appeal lies in the fact that besides serving as an effective strategic bulwark, such ships have the strength and resilience to absorb more punishment than any other naval platform. The thick armour-plating, combined with stealth features, makes them infinitely more survivable than smaller vessels.

For classical sea-power thinkers, big warships are indispensable assets in modern day warfare because of their size and versatility and the unique capacity to efficiently integrate the foremost innovations in naval technology involving sensors, cruise missiles, unmanned drones and directed energy weapons. Modern technological innovations are extremely power intensive and can only be mounted on large platforms. Moreover, large ships offer greater protection to sophisticated armament and sensors. Unlike smaller vessels, they do not just depend on manoeuvrability and close-in weapon systems for defence. Their superior anti-missile capability ensures a higher order of survivability from incoming missile strikes.

The more interesting tactical argument in favour of large-vessel construction is the protection such ships afford to on-board sensors and machinery. Modern battleships have a protective shield that limits the damage to key components from missile and torpedo attacks to a small area surrounding the point of contact. This ensures a direct hit does not debilitate the entire combat machinery of the ship. By contrast, an attack on a vessel without adequate protection could impact sensitive, deeply integrated technology systems on-board resulting in a complete shutdown of the command and control systems. Large warships also have a greater capacity to accommodate critical passive systems that are invaluable for fleet protection in an anti-access/area-denial (A2/AD) environment.

Proponents also offer a more convincing strategic rationale for building “battleships”. Large modern war-vessels, they aver, facilitate a quantum of power projection that small ships cannot ever hope to match. This is especially true in a globalizing environment where powerful nations seek to influence regional perceptions through hard-power posturing. Indeed, despite expanding global interconnectedness and the shrinking space for conventional conflicts, navies have consistently engaged in hard-power signalling in critical strategic spaces. In East Asia, for instance, China, Japan, Russia and the US have deployed powerful naval contingents on a regular basis, often on the pretext of carrying out benign patrols. The South China Sea is, in fact, the most revealing example of a strategic build-up involving economically interdependent states, occurring in a perfectly globalizing space.

Maritime disputes in Southeast Asia also illustrate the enduring nature of geopolitics. No matter what the economic context, maritime forces must posture, position and manoeuvre to preserve national geopolitical equities. The protection of political influence in the maritime littorals, supporters argue, needs more than a fleet of small specialist vessels. It requires a powerful navy – with air-craft carriers, submarines and big-battle ships – to both project power and protect the fighting fleet from enemy attacks. Indeed, the general consensus in India’s maritime fraternity today is that modern naval arsenals, specifically anti-ship cruise missiles (ASCMs), are far more dangerous than older weaponry. Chinese cruise and ballistic missiles are, in fact, capable of targeting Indian naval assets operating anywhere in the Indian Ocean. That makes the case for bigger, sturdier and stronger ships even more compelling.

The second argument in favour of big war-vessels concerns national brand-building. The large and powerful Kochi is a perfect poster-child for indigenisation and the Narendra Modi government’s mantra of ‘Make-in India”. The ship has been designed by the Navy’s in-house organization – the Directorate of Naval Design – and was constructed in the Mazagon Dock Shipbuilders yard in Mumbai. Supporters also point out that India isn’t the only Indo-Pacific power investing in big ships. The US is building expensive carriers, battleships and littoral combat vessels, and the Chinese have undertaken construction of two aircraft carriers, whilst significantly expanding their big amphibious ship programme. Meanwhile, Japan and Australia have placed large helicopter carriers at the centre of their maritime military strategies.

Finally, nothing conveys strategic intent as effectively as the large conventional warship. The mere presence of powerful destroyers and frigates bristling with cutting edge armament and sensors can provide a decisive psychological advantage in strategic scenarios. It isn’t sheer happenstance, navalists point out, that China has been deploying Type 054A guided-missile frigates (equipped with the YJ-83 anti-ships missiles) and submarines for anti-piracy duties in the Indian Ocean. By sending its most modern combatants for low-spectrum security tasks, Beijing has sought to stamp its military footprint in the South Asia littorals. By the same token, the US has been unapologetic about deploying its aircraft carriers for humanitarian assistance duties in the Western Pacific, even as it has chosen to deploy its littoral combat ships for functional tasks that can be performed by smaller functional assets.

India’s maritime managers realise that in the new world, regional perceptions define maritime strategy. Since perception management is a key ingredient of maritime diplomacy, the navy must rely on aircraft carriers and large destroyers for power-projection in the Indian Ocean. This includes capabilities which are used more to attain strategic leverage than actually fight full-scale wars. Given the fractious nature of geopolitics in maritime-Asia, big warships aptly exemplify India’s growing geopolitical ambitions. Regardless of what sceptics may say then, the super-destroyer is here to stay.

Views expressed are of the author and do not necessarily reflect the views of the IDSA or of the Government of India. Originally published by Institute for Defence Studies and Analyses (www.idsa.in) at http://www.idsa.in/idsacomments/INSKochiandtheBig-WarshipDebate_asingh_091015.html