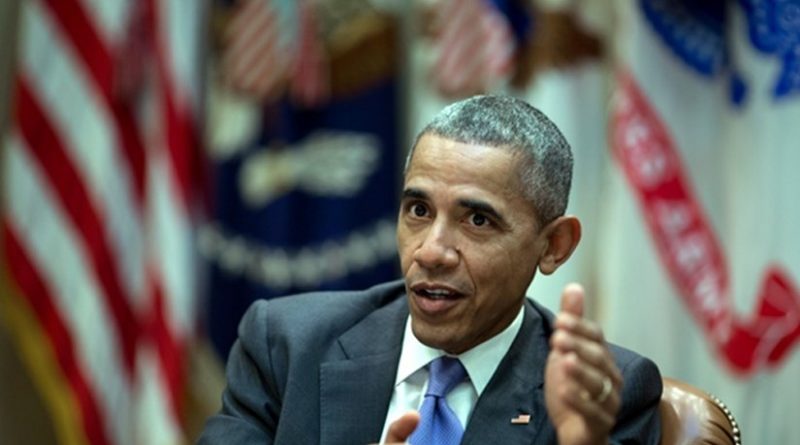 President Barack Obama makes a point during a meeting with senior staff in the Roosevelt Room of the White House, May 18, 2016. (Official White House Photo by Pete Souza)

President Obama’s legacy is on the line. He must either rise to meet the challenge by taking courageous and decisive military measures; or continue his futile diplomacy, watch the systematic disintegration of a whole country, severely damaging America’s international standing, and undermining its critical global role in the pursuit of peace and stability.

Much has been written about the unfolding tragedy in Syria, but how many of these unimaginable atrocities have been etched in the consciousness of the American public? As president, Obama refuses to rise up to stop this unfathomable horror; thousands more innocent men, women, and children are butchered each week and we still play politics with the lives of so many more who will not escape death as long as we continue to sit on our hands.

I urge every reader of this column to spare a moment and imagine the plight of the Syrian people, especially the children. This is what you will see: more than 50,000 children under the age of 15 have been killed—if they stood shoulder to shoulder, they would form a line 80 miles long. Two and a half million children are languishing in refugee camps, including 306,000 that have been born since the civil war began in 2011. Eight million children inside and outside the country are in desperate in need of food and medical care. More than 15,000 children crossed Syria’s borders by themselves; many were left to die not knowing what happened to them and why. One in three children have endured horrific violence against them and their families, and over 2.5 million children have no access to basic education.

Take another moment and imagine children being pulled from the rubble—the dead, the severely wounded, the unconscious, and the ones who are still awake but do not know what struck them and why. The death toll of children and adults alike has been reduced to mere numbers – ‘worthless’ statistics – which no longer resonate as we have become comfortably numb. As you keep imagining, you will see countless children waiting like sacrificial lambs to be slaughtered on the altar of the international community’s complete and utter moral bankruptcy.

What happened to our moral responsibility? How can we watch Aleppo’s systematic destruction and allow the daily massacre of hundreds of innocent women and children? I shed tears for every child, I weep for every little lifeless body who never knew what was happening around them, or why they were ever born.

Perhaps the most catastrophic result of Syria’s war is that two or three generations of Syrians have now been lost. No words can describe the atrocities and savagery raging in Syria, and yet they are met with indifference and ineptitude by the international community. I wonder what happened to America—can we afford to remain silent, and if we do not rise to stop this madness, who will?

How many more times should we attempt to establish a ceasefire with Russia only for it to be violated time and again? Putin is a ruthless and deceitful dictator with no conscience or human decency. His ambition in the Middle East trumps the lives of every Syrian citizen; he is morally corrupt at his core.

We should have long since known that no ceasefire agreement with Russia will hold as long as Putin believes that time is on his side, and that he can further consolidate his gains and exploit the vacuum we left and our unwillingness to put an end to the slaughter with the use of force.

Only recently, John Kerry expressed deep frustration about the Obama administration’s approach to resolving the conflict, and he correctly pointed out that if diplomacy is not backed by the credible threat of force, it is doomed to fail.

This is precisely why Putin and Assad felt they could violate the second ceasefire with impunity. Indeed, the failure to punish Assad when he crossed Obama’s red line and used chemical weapons in 2013 left him and Putin undeterred to indiscriminately kill and maim, leaving nothing but the shadows of hell lurking behind.

The question for the US is, how much longer can we afford to watch from the sideline and allow the unforgiven slaughter of innocent men, women, and children to continue unabated? Whether or not we aim to establish another ceasefire, we must first send a clear and unambiguous message to Putin and Assad.

Obama must immediately establish a no-fly zone with the full cooperation of Turkey, which is eager to do so, authorize the bombing of Assad’s runways and air force hangers to destroy much of his military planes, and provide moderate rebels such as the Free Syrian Army, which the US has been supporting from day one, with shoulder-fired rockets to down low-flying drones and helicopters to end the dropping of barrel bombs that kill indiscriminately and lay complete neighborhoods in ruin. These military measures will inhibit the Russians from attacking areas held by the rebels, as Putin would certainly not want to escalate tensions with the US.

While the battle against ISIS is necessary and it must be defeated, it should not have been done at the expense of leaving Putin and Assad to hammer the rebels freely, and in the process kill an untold number of innocent civilians.

To be sure, Obama’s unwillingness to take forceful actions in Syria in the past five years led to the disintegration of the country, which is a continuation of Bush’s disastrous Iraq war only in another form.

Taking such decisive military measures is still in line with President Obama’s unwillingness to introduce ground troops in yet another regional conflict because a) it does not risk the lives of many of our soldiers, and b) it will not cause considerable collateral damage.  We cannot remain idle as the alternative is simply unthinkable.

Putin will have a completely free hand to do what he wishes in Syria, and leave it to him to expand his outreach to other countries in the region, substantially enhance his credibility as an unwavering supporter of his allies, and dangerously infringe on America’s sphere of geostrategic influence with impunity.

Iran will not hesitate to further increase its military and material support of Assad, consolidate its presence in Syria, and kill as many rebels ‘in the name of Allah;’ it will be further emboldened to intimidate the Gulf States and intensify its military campaign in Yemen in its pursuit of regional hegemony.

Assad, who has been gaining both in territory and prestige in recent months as a result of Putin’s unmitigated support, will have no reason to compromise and will continue to fight to the last rebel to ensure that he will be a significant part of any future solution to the conflict.

Though Russia, Iran, and Assad are guilty of war crimes, they sadly still have a role to play in shaping Syria’s future. However, no negotiation with Putin should ever take place to reach a new ceasefire before we undertake such a military campaign, and any future negotiations must also be conditional upon the cessation of all hostilities by Putin and Assad first.

Abandoning Syria to the whims of Putin and Assad and allowing the merciless butchering of its people is a betrayal of our most cherished moral values. We must rise to stop the evil perpetuated by Putin, Assad, and Khamenei, or forfeit our moral responsibility and our credibility with our friends and allies.

President Obama’s legacy is on the line. He must either rise to meet the challenge by taking courageous and decisive military measures, saving the lives of countless Syrians while paving the way for his successor to pursue a new strategy to end the civil war from a position of strength; or continue his futile diplomacy, watch the systematic disintegration of a whole country and the slaughter of its people with apathy and indifference, leave a tarnished legacy that will haunt him for the rest of his life and beyond, severely damage America’s international standing, and undermine its critical global role in the pursuit of peace and stability.

I want to believe that Obama will not allow America to descend this low, where the Trumps of our time can rise.

Home » What Happened To America? – OpEd

One thought on “What Happened To America? – OpEd”