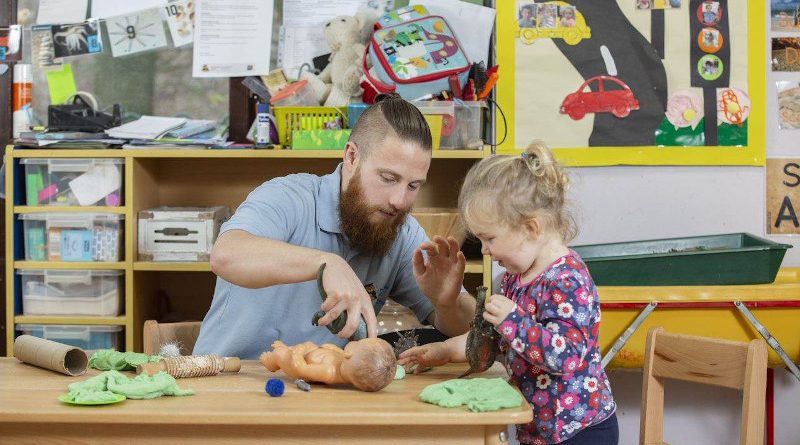 The UK’s early years sector – staffed 96% by women and facing a longstanding recruitment crisis – needs a radical new strategy to gender-diversify its workforce, according to a new report[1].

GenderEYE (Gender Diversification in Early Years Education) – a study by Lancaster University and the Fatherhood Institute, funded by the Economic and Social Research Council[2] – found that despite early years education’s continuing status as Britain’s least gender-diverse caring profession[3], the Government and most early years employers have done very little to recruit and retain male staff.

The study reveals that less than a fifth (14%) of early years settings have pursued specific strategies aimed at recruiting men. Researchers found:

Such approaches have been found to be successful in other countries – including in Norway, which has the most gender-diverse (9% male[4]) early education workforce in the world. They have also proved successful within local pockets of good practice uncovered in the UK, such as the London Early Years Foundation, whose management have championed male involvement and whose workforce is well above the national average.

Researchers stress that gender diversity in the workforce matters because when caregiving is publicly recognised, valued and rewarded as an activity for men as well as women, young children are more likely to grow up making less constrained choices about their own careers and gender roles in families.

Strategies they recommend to improve male recruitment and retention include:

Principal investigator Professor Jo Warin from Lancaster University’s Department for Education Research, said: “At a time when there is so much public attention on gender equality it is extraordinary to see just how intransigent the early years workforce is, based on traditional gender roles which are assumed to be ‘natural’.

“We need to capitalise on the shift that we have seen in many homes during the pandemic, with men adopting more prominent, care-giving roles. This could open up a window of opportunity – but men need to know that early years education is an option open to them. It is a crucial time to act when so many ‘traditional’ jobs are at risk and career changes are likely.”

Lead researcher Dr Joann Wilkinson, based at the same department, said: “Although we found some clear examples of good practice in supporting mixed gender workforces, these were few and far between.”

Co-investigator Dr Jeremy Davies from the Fatherhood Institute – who will lead a training course based on the GenderEYE findings for early years managers in October, added: “Very few organisations in the sector are actively and systematically changing the way they do things, in order to pull men in. We’re looking forward to supporting the sector to see that getting this right is important for everyone – for female staff, and the children we look after, as well as for men themselves.”

The report, launched by the research team during an online conference, is the culmination of a 26-month-long study which saw the research team work with academics and practitioners in Norway, to share experiences of recruiting and supporting early years professionals.

The team also set up research hubs in Bradford, Bristol, London and Southampton, where they visited early years settings which employed mixed gender workforces to conduct interviews and observations. Key figures from the early years sector were interviewed, along with representatives from training and careers providers. An online survey which attracted 482 responses from male and female practitioners and managers of early years settings, also helped identify how many men were employed in early years settings, and provided broader insight into roles, support and training.

[2] For more information about the study see https://gendereye.org/.

[5] According to figures from the ONS analysed by the Fatherhood Institute, fathers pre-lockdown (2015) were spending 36% of the time women spent on childcare; during lockdown the figure rose to 64%: http://www.fatherhoodinstitute.org/2020/mens-childcare-up-58-during-lockdown-makes-case-for-father-friendly-jobs/. And a recent study by the Institute of Fiscal Studies found that during lockdown, in every hour between 8am and 6pm, around 70% of mothers and 50% of fathers were doing childcare: https://ifs.org.uk/uploads/R178-Family-time-use-and-home-learning-during-the-COVID-19-lockdown-1.pdf.https://gendereye.org/