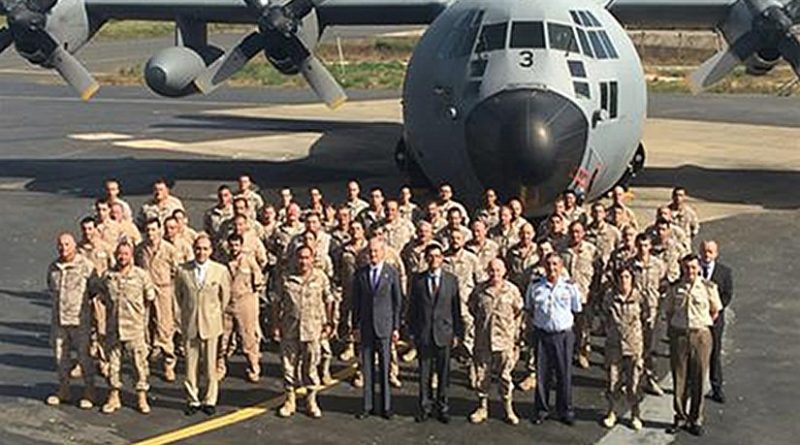 Spain's Minister for Defence, Pedro Morenés, paid a visit to the Marfil Detachment of the Spanish Air Force stationed in Dakar, the capital of Senegal. Photo Credit: Ministerio de Defensa.

Spain’s Minister for Defence, Pedro Morenés, paid a visit Tuesday to the Marfil Detachment of the Spanish Air Force stationed in Dakar, the capital of Senegal.

Subsequently, during his speech to the detachment, the Minister for Defence remembered the three servicemen from the 802nd SAR Squadron of the Spanish Air Force who lost their lives in the helicopter accident on 22 October and expressed gratitude for the work carried out by the members of the contingent, who Pedro Morenés believes are essential in the fight against terrorism and for guaranteeing stability in these African countries.

The Minister for Defence then took part in the third plenary session entitled ‘International Solutions in favour of Security in Africa’ alongside the French Defence Minister, the Ghanaian Foreign Affairs Minister, the President of the Economic Community of West African States, the Secretary-General of the European External Action Service and the President of the International Committee of the Red Cross.

At this forum, Pedro Morenés expressed his firm conviction that the majority of the challenges in this century will develop in Africa, meaning that security in Africa is a fundamental issue on the agenda for all members of the international community.

The Marfil Detachment of the Spanish Air Force is stationed in Dakar to foster security in the Sahel region.

Its mission is to provide air transportation support to Operation Barkhane. It also supports the Spanish contingent of EUTM Mali and the UN MINUSMA Operation. Following a request from the French military authorities, authorization has been given for it to be used on medical evacuation missions.

The shortage of air transport resources in the region and the demand from operations led by France in West Africa have provided great value to the contribution made by Spain.

The detachment began operating in January 2013 and the 12th contingent is currently stationed in the field, having begun operations on 16 October and is scheduled to remain for a period of three months. It is made up of 57 servicemen and has one Hercules C-130 transport aircraft.