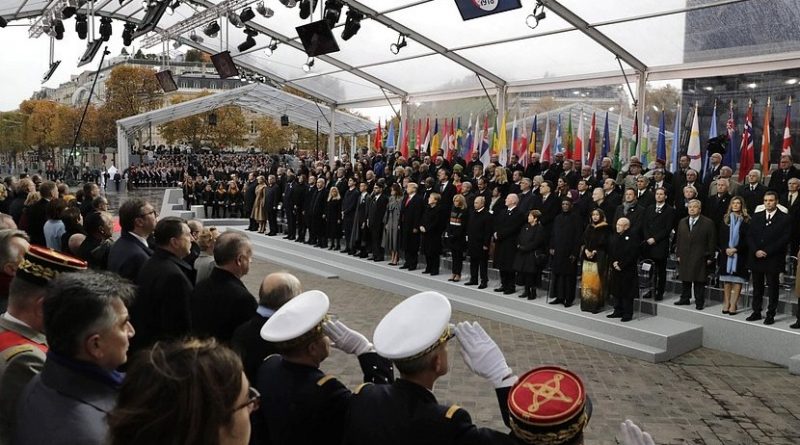 Those in the war industry and the business of commemorating the dead have little time for peace, even as they supposedly celebrate it. For them, peace is the enemy as much as armed opposing combatants, if not more so. Dr Brendan Nelson of the Australian War Memorial is every bit the propagandist in this regard, encased in armour of permanent reminder: Do not forget the sacrifice; do not forget the slaughter. The issue is how war, not peace, is commemorated.

That theme was repeated, for the most part, in Paris on November 11. US President Donald Trump spoke of “our sacred obligation to memorialise our fallen heroes.” French President Emmanuel Macron marked the 100th anniversary of the Great War by having a dig at nationalism, calling it a “betrayal of patriotism” (is there a difference?). The nationalists, he warned, were getting busy, these “old demons coming back to wreak chaos and death”. The intellectuals (and here, he alluded to Julien Benda’s 1927 classic, La trahison des clercs) were at risk of capitulating.

But Macron, rather slyly, was hoping that the French obsession with universal values would somehow render his message less parochial: to be French was to be an internationalist, not a tunnel-visioned, rabid nationalist. The soldiers who perished in the Great War did so in the defence of France’s “universal values” in order to repudiate the “selfishness of nationals only looking after their own interests.” Much room for disagreement on that score, and Marine Le Pen would have been a suitable corrective.

The peace activities of the Great War, asphyxiated, smothered and derided in texts and official narratives, are rarely discussed in the mass marketed solemnity of commemorations. The writings of those prophets who warned that any adventurism such as what transpired in 1914 would be met with immeasurable suffering are also conspicuously absent. Jean de Bloc, whose magisterial multi-volume The Future of War appeared in 1898 in Russian, found it “impossible” that Europe’s leaders would embark on a conflict against each other; to do so would “cause humanity a great moral evil… civil order will be threatened by new theories of social revolution”. The end would be catastrophic. “How many flourishing countries will be turned into wilderness and rich cities into ruins! How many tears will be shed, how many will be left in beggary!”

These sceptics were the enlightened ones, scorned for not having the sense of fun that comes with joining battle and being butchered in the name of some vague patriotic sentiment. If human beings are animals at play, then play to the death, if need be – the rational ones were sidelined, persecuted and hounded. They are the party poopers.

Prior to the first shots of the guns of August in 1914, Europe had witnessed a slew of meetings and activities associated with the theme of peace. From 1889, pacifists were busy with Universal Peace Congresses, while the Inter-parliamentary Union made a stab at efforts and ideas to reduce national tensions. The Hague Peace Conferences of 1899 and 1907, with one scheduled to take place in 1915, suggested a certain sensibility, even as the military machinery of Europe was getting ominously more lethal. At the very least, the political classes were playing at peace.

The 1,200 women who gathered at The Hague in 1915 as part of the Women’s International League for Peace and Freedom feature as sane if forgotten voices before the murderous machine truly got going. Their work involved attendees from 12 countries and the passing of 20 resolutions on war. They worked to convince those engaged in the murderous machine about the folly and were dismissed accordingly as cranks and nuisances.

The peace movement was sundered by the patriotic diseases that engulfed the continent, and such organisations as the International Peace Bureau failed to reach a consensus on how best to quell warring aggressions. In January 1915, its Berne meeting was characterised by division, best exemplified by a resolution denouncing Germany and Australia for egregious breaches of international law. The vote was divided evenly, and unity was destroyed.

While monuments to the war makers and fallen soldiers dot the town squares of the combatant nations, lingering like morbid call cards for failed militarism, there are virtually none in the service of peace. The tenaciously wise and farsighted Austrian noblewoman Bertha von Suttner, the first woman to win the Nobel Peace Prize in 1905 and suspect the motives of governments behind the Hague Peace conferences, hardly figures in commemorative statuary. Nor does Rosa Luxemburg, who began a twelve-month sentence in Berlin’s Barnimstrasse Womens’ Prison on February 18, 1915 for “inciting public disobedience”.

Her crime, committed during the words of her famous Fechenheim address, was to call upon German workers to refuse shooting their French counterparts should war break out. “Victory or defeat?” she would sadly reflect in her anti-war tract, The Junius Pamphlet (1915) written whilst in confinement. “Thus sounds the slogan of the ruling militarism in all the warring countries, and, like an echo, the Social Democratic leaders have taken it up.”

As Adam Hochschild sourly noted in 2014, those who refuse to fight or barrack for war are ignored by the commemorative classes. “America’s politicians still praise Iraq War veterans to the skies, but what senator has a kind word to say about the hundreds of thousands who marched and demonstrated before the invasion was even launched to try to stop our soldiers from risking their lives in the first place?”

Events conspicuously against the spirit of killing and maiming opponents, such as that which took place during the short lived Christmas Truce of 1914, have only been remembered – and tolerated – because of their public relations quality. These events sell chocolates and cakes; they draw people to sites and commodities. The truce signalled no revolution; it did not challenge the war planners. “It’s safe to celebrate,” commented Hochschild, “because it threatened nothing.” The sovereignty of war, the institution of state-sanctioned killing, remained, as it still does, though selling peace can be lucrative when the shells have stopped falling.

The obscenity here is that conflict, most notably that of the First World War, was meant to be cathartic, a brief bit of masculine cleansing that would end by the arbitrarily designated time of Christmas. It was advertised as a picnic, a brief testosterone outing which would see men return intact. Foolishly, such figures as HG Wells saw it as “the war to end war”, so get it over and done with, minimal fuss and all. (To be fair to Wells, he found disgust and despair subsequently, reflecting upon this in The Bulpington of Blup in 1932.)

This was, truly, as the title of Margaret MacMillan’s work goes, the war that ended peace, and we should not forget the political and military classes, instrumental in dashing off soldiers to their death, who engineered it with coldness and ignorance. Foolishness and demagoguery tend to hold hands all too often, distant from that most moving sentiment expressed by the jailed US socialist activist and presidential candidate Eugene V. Debs. “I have no country to fight for; my country is the earth; and I am a citizen of the world.”