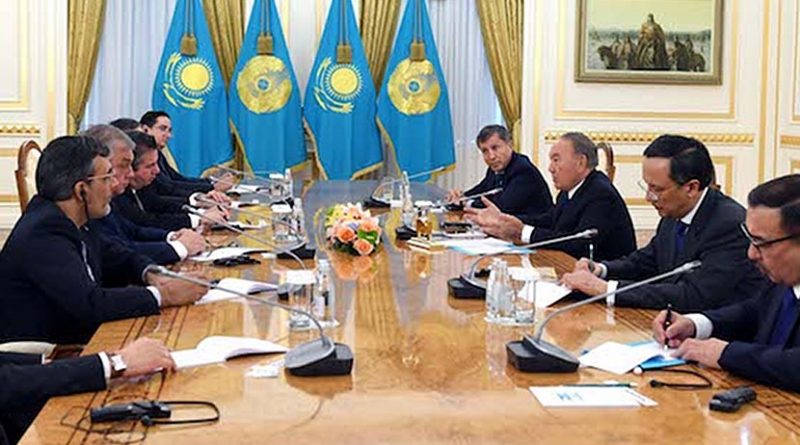 Kazakh President Nursultan Nazarbayev met October 31 with the heads of Russian, Turkish, Iranian delegations as well as a delegation of observers from the U.S., Jordan and the UN. Credit: Akorda.kz

As Kazakhstan prepares to chair the UN Security Council for the month of January 2018, the Central Asian country’s contribution in the process of de-escalation of the nearly seven-year old conflict in Syria has been commended during Foreign Minister Kairat Abdrakhmanov’s recent visits to London and Vienna.

The applause has come in the run-up to the eighth round of the Astana Process on Syrian peace meant to supplement UN-brokered peace talks in Geneva, in Kazakhstan’s capital city, on December 21-22. The first round of talks was launched in January 2017, nearly one month after the foreign ministers of Iran, Turkey, and Russia agreed to do so pursuant to the UN Resolution 2336 adopted December 31, 2016.

British Foreign Secretary Boris Johnson noted in a meeting in London with Abdrakhmanov on November 20 the great importance of Kazakhstan in the Astana Process on the settlement of the situation in Syria, the situation in Afghanistan, the implementation of the Minsk agreements on Ukraine, countering terrorism, non-proliferation of weapons of mass destruction and regional cooperation in Central Asia. He said: “Kazakhstan will be the first Central Asian nation to chair the UN Security Council. I look forward to further cooperation on global security.”

Austrian President Alexander Vander Bellen lauded in a meeting with the top Kazakh diplomat on December 6 in Vienna the significant contribution of Kazakhstan in the process of de-escalation of the conflict in Syria and other peace keeping efforts of the country, especially the role of President Nazarbayev in strengthening the movement for the nuclear-weapons-free world.

During the seventh International Meeting on Syria in Astana on October 30-31, 2017, President Nazarbayev told the heads of Russian, Turkish, Iranian delegations as well as a delegation of observers from the U.S., Jordan and the UN that the Astana Process enhances the efficiency of the Geneva talks.

Emphasizing the positive results of the previous rounds, he noted: “You have solved the problem of de-escalation of military actions in several regions. You have determined further mechanisms. The humanitarian situation is improved. It is important to preserve the ceasefire regime.”

President Nazarbayev added: “Any kind of negotiations and dialogue is a path to the future. We all want a peaceful solution to this issue. It is impossible to fight terrorism if the efforts of all countries are not united and if there is no single coalition. We are making every effort to create the necessary conditions to continue negotiations.”

The forthcoming round of two-day talks in Astana will focus on freeing prisoners, the delivery of humanitarian aid, the functioning of de-escalation zones and other issues, the Kazakh Foreign Ministry said in a statement on December 11.

According to the ministry, the talks are expected to yield a regulation on a working group on the release of prisoners, exchange of bodies of those killed and search for those missing. “Participants are also expected to discuss issues of the operation of de-escalation zones and adopt a joint statement on humanitarian demining in Syria, including at UNESCO sites,” the ministry said.

These are important issues because the October 30-31 round discussed adherence to de-escalation zones agreed-upon in previous Astana Process talks as well as humanitarian issues, primarily the issues of exchange of detainees, prisoners of war and missing persons.

Representatives of the Syrian government and the Syrian armed opposition, delegations from Iran, Russia and Turkey attended closed-door negotiations. U.S. Acting Assistant Secretary of State David Satterfield and a delegation from Jordan and the United Nations also attended.

The UN delegation was led by Milos Strugar, an associate of UN Special Envoy for Syria Staffan de Mistura, who attended a couple of previous rounds.

During the talks, head of the Syrian government delegation Bashar al-Jaafari called upon the guarantor states to abide by previous agreements, including de-escalation zone agreement.

In the joint statement, Iran, Russia and Turkey asserted there was no military solution to the Syrian conflict, rather the commitment to the political process guided by the UN Security Council resolution 2254 (2015) should prevail.

Concluding the two-day talks, the three guarantor states praised the contribution of the four de-escalation zones agreed-upon during the sixth round of Astana process in September 2017.

“We emphasise the significant reduction of violence on the ground in Syria as a result of measures taken to strengthen and maintain the ceasefire regime, including launching the de-escalation areas and creating the security zones,” said Kazakh Minister for Foreign Affairs Abdrakhmanov as he read out the document.

“We hope that all the agreements reached today are fully implemented. All the items on the agenda, including the issues related to hostages, detainees, missing persons, humanitarian demining and other issues discussed during the seventh round in Astana, are of great importance for all parties,” Abdrakhmanov added.

During the negotiations, the guarantor states – Iran, Russia and Turkey – stressed the need to take confidence-building measures referring to such humanitarian issues as the release of detainees, handover of bodies and finding missing persons. According to reports, the parties involved in the negotiations, however, have yet to come to an agreement.

The Syrian opposition drew special attention to the issue of detainees during the talks. “Another thing we are here for are detainees, forcibly detained people, and we have around quarter of a million people. We do not know how many of them are still alive. So this is a very important issue for every Syrian,” noted advisor to the Syrian opposition Yahya al-Aridi. Certain people impede the progress in achieving the objective, he added.

During a press conference wrapping up the talks, the Syrian opposition criticised Iran and the Syrian government for hampering the process of adopting the document on detainees.

“We signed documents [on the release of detainees] and there was agreement approved by Russia and Turkey. We had discussions in the presence of the UN, which supported it [the document]. Who is against – Iran and regime,” said al-Aridi, stressing the opposition’s firm commitment to push the issue forward and raise it during the upcoming Geneva talks.

“All the present parties supported it. The regime does not want to resolve the issue and we do not want to put that issue aside,” he added.

Not surprisingly, the joint statement from the guarantor states emphasised “the need for the conflicting parties to take confidence‑building measures, including the release of detainees/abductees and the handover of the bodies as well as identification of missing persons, to create better conditions for political process and lasting ceasefire.”

In the talks, Russian President Vladimir Putin’s Special Representative for Syrian settlement Alexander Lavrentiev reaffirmed his country’s initiative to organise a congress for Syrian national dialogue and reconciliation. The forum is expected to be held in Sochi due to security reasons, he added.

“We have been discussing the place for a while. We reviewed different options. We would certainly like to organise such important intra-Syrian forum in Syria itself, but with the current situation that does not allow for ensuring security, so we decided to hold it in Russia,” said Lavrentiev at a press conference.

It is not yet clear whether the congress will be held, however, as the Syrian opposition already questioned the motives behind it. The Syrian government delegation, however, supported the initiative and expressed its firm commitment to that.

“As for national dialogue forum, it is the result of coordinated activities which continue between Russia and Iran. Given the situation at the front and decreasing activity of terrorists, it is time to hold such kind of conference and we are ready to participate. The forum will be held in Russia and we think we can trust Russia as a friendly state,” said al-Jaafari.

In their joint statement, Russia, Turkey and Iran agreed “to discuss in consistence with the UN-led Geneva process the Russian Federation’s proposal to convene a Congress of the national dialogue about which the Russian side shared information with the guarantors.”