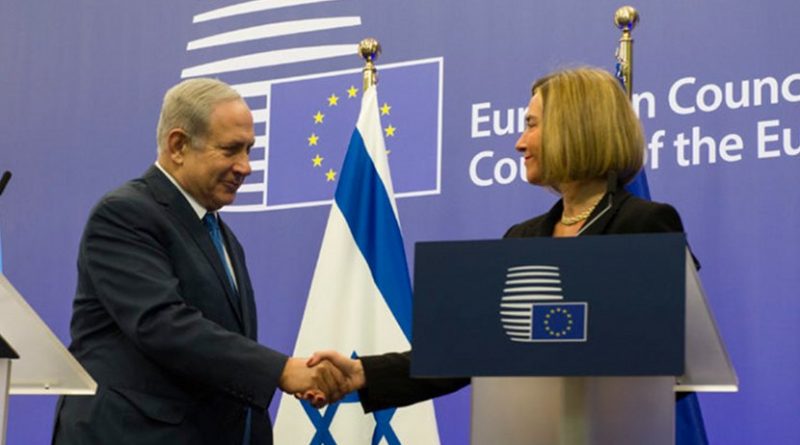 (EurActiv) — Monday’s Foreign Affairs Council begins with a discussion with Israeli Prime Minister Benjamin Netanyahu, against the background of the decision of US President Donald Trump to recognise Jerusalm as the capital of Israel.

Ahead of the meeting, EU foreign affairs chief Federica Mogherini said this was the first visit by a prime minister of Israel in along time. She added that Netanyahu will discuss with the 28 foreign ministers mainly the situation in Jerusalem, and “the perspective of the launch of negotiations for a two-state solution”.

Yitzhak Shamir was the last Israeli prime minister to visit the EU 22 years ago.

Speaking alongside Netanyahu, Mogherini said “the worst thing that can happen now is an escalation of tensions” which in her words would be “a gift for the extremists”.

Netanyahu thanked Mogherini and the government of Lithuania (he probably wanted to thank Estonia, which holds the rotating Presidency of the Council of the EU).

In his statement, he made emphasis that Israeli intelligence had prevented many terrorist attacks on European soil.

“Israel serves a very important security function for the people of Europe, not always understood, but appreciated by the relevant governments,” he said.

Netanyahu also emphasised that Israel is for the EU a big partner for innovation – he mentioned areas such as artificial intelligence, cyber security and connected cars. He also reminded that Israel found offshore gas.

For 3,000 years Jerusalem has been the capital of the Jewish people, Netanyahu hammered out, lamenting that this was “denied by UN forms”, mentioning UNESCO.

“What President Trump has done is he has put square facts on the table,” he said, adding that “recognising reality is the substance of peace”.

The Israeli PM said there was now an effort underway to bring forward a peace proposal by the US administration.

“I think we should give peace a chance. It’s time the Palestinians recognise the Jewish state and its capital,” he said, adding: “It’s called Jerusalem.”

Netanyahu also said he believes most of the European countries will move their embassies to Jerusalem, recognise Jerusalem as Israel’s capital and “engage robustly with Israel for security, prosperity and peace”.

After that the ministers will hold a discussion on the Middle East “in wider terms”, not only about Israel and Palestine, but also the EU support for countries in the region, notably Lebanon, where Mogherini will go for a visit on 19 December, to show support to PM Saad al-Hariri and the institutions of the country.

Lebanon is still recovering from a crisis triggered a month ago, when Hariri announced his resignation while visiting Saudi Arabia, accusing Iran and Hezbollah of meddling in regional conflicts in violation of Lebanon’s policy of non-intervention.

Hariri returned to Lebanon two weeks later and withdrew his resignation last week, while his government restated its non-intervention policy.

Mogherini said another issue to be discussed is the EU’s renewed strategy for Iraq, and the Union’s support at a time when the country is getting out of the “terrible experience” fighting Daesh.

Iraqi forces recaptured the last areas still under Islamic State control along the border with Syria on Saturday and secured the western desert, marking the end of the war against the militants three years after they had captured about a third of Iraq’s territory.

Mogherini also said ministers will have “a historic decision to establish PESCO”.

PESCO means Permanent Structured Cooperation on Security and Defence, as outlined in the Treaty of the EU. Under PESCO the focus is on expansion of the cooperation in terms of individual projects. Armament projects, which are interesting for several member states, are going to be launched jointly by them. They then will be considered as EU projects, even if not all member states are involved.

Mogherini announced that 25 member states (all except UK, Denmark and Malta) have notified their intention to be part of PESCO, and that they will identify 17 joint EU projects.

The Sahel region faces a number of pressing challenges such as extreme poverty, frequent food crises, high population growth rates, institutional weaknesses, irregular migration and related crimes such as trafficking in human beings and migrant smuggling. Violent extremism also poses serious security challenges to the region and have potential spill-over effects outside the region, including Europe.

Mogherini said the EU is supporting strongly their work on development, but also on security, fighting trafficking and organised crime.

Last but not least, Mogherini said that foreign ministers and development ministers will follow up on the recent EU-African Union summit.

The EU foreign affairs chief said she was able to announce that the first high-level meeting of the Task force for fighting trafficking beings, decided on the occasion of the summit, will take place on 14 December.