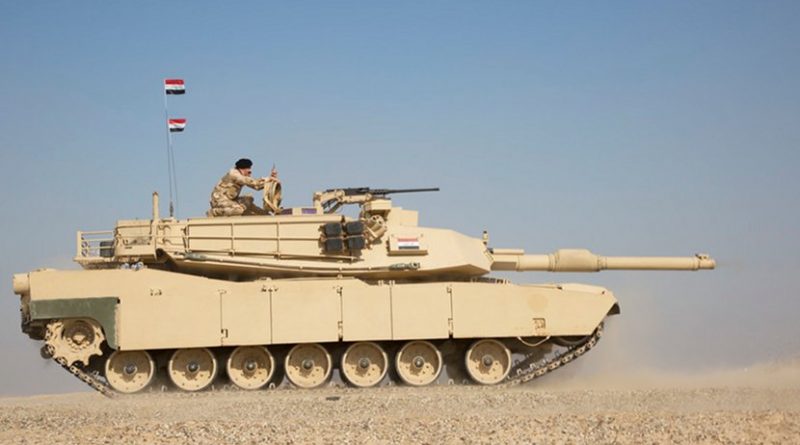 An Iraqi soldier observes a live-fire exercise from atop an M1 Abrams tank at the Besmaya Range Complex in Iraq, Nov. 12, 2018. Army photo by Spc. Eric Cerami

At one time, the Islamic State of Iraq and Syria controlled a self-proclaimed caliphate that stretched from Syria to Iraq, but now that force in Iraq has been degraded so much that the remnants are hiding in caves, deep wadis and tunnels in the desert and hills of western Iraq’s austere terrain, the commander of Task Force Rifles told Pentagon reporters.

Checkpoints along the Iraq-Syria border have now been reopened, and Iraq’s border guard and security forces are operating along that border to prevent ISIS from crossing, he said. That includes “intense cross-border fires” by Iraqi and coalition forces in consultation and coordination with Syrian Democratic Forces, he added.

U.S. and coalition forces are advising, assisting and enabling Iraqi forces, he said, support that includes providing them with joint fires, intelligence, aerial surveillance and training, along with some equipment. “It’s a good partnership” that’s preventing a resurgence of ISIS and continues to degrade their numbers and effectiveness, the colonel said.

Byrom emphasized that the Iraqis are conducting their own missions and making the decisions. “They are effectively targeting ISIS and regularly conducting operations that disrupt ISIS and preventing their resurgence,” he said.

Asked how many ISIS fighters remain in Iraq, Byrom said he doesn’t focus on the number. “What we’re really focused on is the capability and whether they can translate this capability into destabilizing or resurging,” he explained.

The good news story, he said, is that ISIS attacks “are not having that much of an impact on the population.”