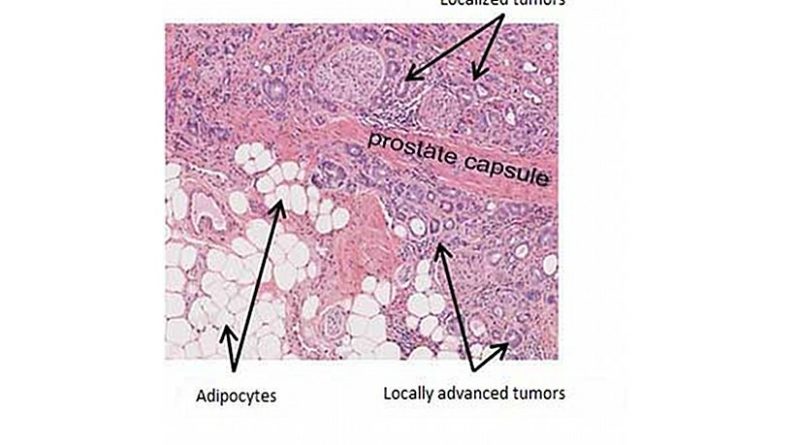 Prostate cancer can remain localized in the prostate gland. There it has a “good prognosis”. Some tumors (called locally advanced tumors) will get through the prostate capsule and in this way could propagate throughout the body. This phenomenon is controlled by adipocytes in the periprostatic adipose tissue (white circles) via their ability to secrete chemokine CCL7. Obesity amplifies this phenomenon. © Catherine Muller

Obesity has direct consequences on health and is associated with the onset of aggressive cancers, but the mechanisms underlying this phenomenon are little known.

Researchers from the Institut de Pharmacologie et he Biologie Structurale (CNRS/Université Toulouse III – Paul Sabatier)1 have recently elucidated one of these mechanisms in prostate cancer, one of the most common cancers in men: in obese patients, the adipose tissue surrounding the prostate gland facilitates the propagation of tumor cells outside the prostate. A patent2 has been filed for these results, which open new avenues for the treatment of prostate cancer, and was published in Nature Communications on Tuesday.

The prostate is surrounded by a fatty deposit called periprostatic adipose tissue (PPAT). As prostate cancer progresses, tumor cells may infiltrate this periprostatic adipose tissue: this is a key step in the progression of this cancer, as it signals locally advanced disease (where the cancer can progress to nearby organs). This phenomenon is more frequent in obese patients, in whom the size and number of PPAT adipocyte cells are higher. These cells can secrete numerous bioactive molecules such as chemokines, which can attract other cells. The scientists investigated whether this change in PPAT was responsible for the aggressiveness of prostate cancer in obese subjects.

The researchers showed that adipocyte secretions can attract prostate tumor cells. By analyzing chemokines secreted by PPAT adipocytes they identified the factors involved, in particular chemokine CCL7, which interacts with one of its receptors, CCR3, present on the surface of prostate tumor cells. The scientists demonstrated that chemokine CCL7 is diffused through the PPAT to the area around the prostate and that it attracts tumor cells that express the CCR3 receptor towards the periprostatic adipose tissue, the gateway to the rest of the body.

The researchers then tested the influence of obesity on this mechanism. They showed that in obese mice who had been fed a high-fat diet, tumor progression and dissemination outside the prostate is greater than in mice with normal body weight. Adipocytes do indeed secrete more CCL7 in the case of obesity. When tumor cells that no longer express CCR3 are implanted in the prostates of mice, tumor progression and dissemination are significantly reduced, especially in obese mice.

Finally, the researchers observed this same mechanism in men where CCL7 secretion is also higher in case of obesity. The results of a study of more than 100 human tumor samples show that the tumors expressing a high level of CCR3 present more frequent local dissemination. They are also more aggressive and resistant to treatment. Since molecules that target CCR3 have already been developed by the pharmaceutical industry for other diseases, the researchers are now hoping to explore this new therapeutic pathway, which could reduce the aggressiveness of prostate cancer in obese patients.