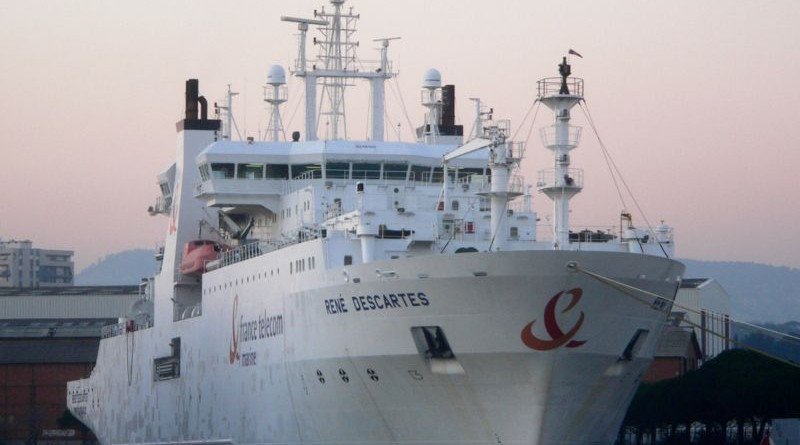 Orange said Friday that it landed Google’s transatlantic Dunant cable in Saint-Hilaire-de-Riez, in the Vendée region of France, first and terrestrial stage of the laying of this cable.

This new 6,600 km long submarine cable linking the United States to France, posed by the company SubCom and scheduled to come into service before the end of 2020, is the result of a project combining Orange and Google. The Europe-United States axis is one of the most important submarine routes in the world with a need for connectivity that doubles every second year. Dunant will help to meet the explosion in Internet usage and guarantee ever more efficient connections for Orange and Google customers.

As the “Landing Party” and owner of the French part of the cable, Orange has completely refurbished the historic station in Saint-Hilaire-de-Riez, which was no longer in use, to house the terminal equipment for the Dunant system. This area is a strategic location, close to the main connectivity hubs on this side of the Atlantic. From this landing station, Orange is deploying terrestrial optical fibres in France between Saint-Hilai re-de-Riez and Paris to route its traffic on the Dunant cable to the capital’s major Data Centres and will also provide service to the rest of Europe and major international Data Centres.

With this deployment, Orange will benefit from two pairs of optical fibres with a capacity of up to 30Tbp/s each, enough to transfer a 1GB video in 30 microseconds. Orange will thus be able to meet the massive growth in demand for data and content exchanged between Europe and the United States for several years to come.

Dunant will be the first submarine cable to connect the United States to France in more than 15 years and will be designed to combine the most advanced technologies from the world’s various equipment suppliers. The cable will therefore be able to keep pace with innovation in optical transmission technologies and maintain its performance at the highest level for many years to come.

As a major inves tor in more than 40 submarine cables, Orange is committed to developing the quality of service of its global network. This new transatlantic project is one of the Group’s many operations aimed at providing high-quality services to support its customers in their various uses.

“We are very pleased with the arrival of the Dunant cable in France. It is the concrete realization of a project in co-construction with Google that will enable us to respond to the explosion of Internet usage over the long term. This partnership strengthens Orange’s role as a world leader in the investment, deployment, maintenance and operation of strategic infrastructures. The landing of Dunant on our shores once again places France at the heart of the global digital development,” said Jean-Luc Vuillemin, Senior Vice President, International Networks and Services at Orange.

“We are delighted to see the landing of Dunant cable be gins concretely. Once it is in service, Dunant will match the ever growing needs in connectivities of our customers who will benefit from a high bandwidth, well-provisioned, low-latency, highly secure connections,” added, Jayne Stowell Strategic Negotiator, Global Infrastructure for Google.