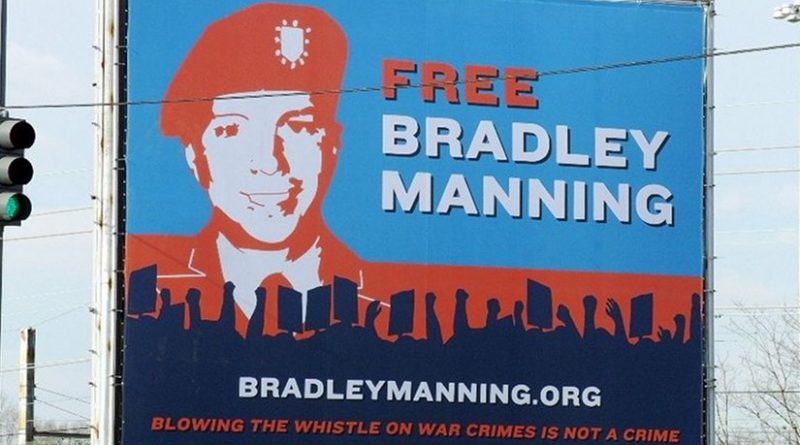 In the ongoing scandal regarding the treatment of Pfc Bradley Manning, the alleged whistleblower responsible for leaking a treasure trove of classified US documents to WikiLeaks, who has been held since last July in a military brig in Quantico, Virginia, a slowly building body of criticism turned into a torrent of indignation early last month, when it was revealed that, as well as being kept in solitary confinement for 23 hours a day and checked every five minutes under a “Prevention of Injury” (PoI) order, Manning is also stripped naked every night (apart from a smock) and is made to stand naked outside his cell every morning as the cells are inspected.

In a legal letter to the US authorities, which was released by his lawyer a month ago, Manning described his conditions of confinement in his own words, which were reported in the Guardian as follows:

[Manning explained] how he was placed on suicide watch for three days from 18 January. “I was stripped of all clothing with the exception of my underwear. My prescription eyeglasses were taken away from me and I was forced to sit in essential blindness.”

Manning writes that he believes the suicide watch was imposed not because he was a danger to himself but as retribution for a protest about his treatment held outside Quantico the day before. Immediately before the suicide watch started, he said guards verbally harassed him, taunting him with conflicting orders.

When he was told he was being put on suicide watch, he writes, “I became upset. Out of frustration, I clenched my hair with my fingers and yelled: ‘Why are you doing this to me? Why am I being punished? I have done nothing wrong.’”

He also describes the experience of being stripped naked at night and made to stand for parade in the nude, a condition that continues to this day. “The guard told me to stand at parade rest, with my hands behind my back and my legs spaced shoulder-width apart. I stood at parade rest for about three minutes … The [brig supervisor] and the other guards walked past my cell. He looked at me, paused for a moment, then continued to the next cell. I was incredibly embarrassed at having all these people stare at me naked.”

In the letter, Manning’s lawyer, David E. Coombs, also included excerpts from the brig’s observation records, in which it is repeatedly stated that Manning is “respectful, courteous and well spoken” and that he “does not have any suicidal feelings at this time”. Coombs also noted that, in 16 entries between August last year and January this year, Manning “was evaluated by prison psychiatrists who found he was not a danger to himself and should be removed from the PoI order.”

In response to this clear abuse, critics began to emerge from unusual places. State Department P.J. Crowley, for example, was obliged to resign after he publicly complained that the Pentagon’s handling of Manning was “ridiculous and counterproductive and stupid,” and this week nearly 300 of what the Guardian described as “America’s most eminent legal scholars” (plus other leading academics) have signed a letter complaining about Manning’s treatment. Initiated on the blog Balkinization, and written by two distinguished law professors, Bruce Ackerman of Yale and Yochai Benkler of Harvard, the complaint (published in full below) states that the “degrading and inhumane conditions” to which Pfc Manning is being subjected are illegal, unconstitutional and could even amount to torture.

As the Guardian reported, they “claim Manning’s reported treatment is a violation of the US constitution, specifically the Eighth Amendment forbidding cruel and unusual punishment and the Fifth Amendment that prevents punishment without trial,” and, “in a stinging rebuke to Obama,” state that “he was once a professor of constitutional law, and entered the national stage as an eloquent moral leader. The question now, however, is whether his conduct as commander in chief meets fundamental standards of decency.”

The complaint has been published in the New York Review of Books, and its signatories include Laurence Tribe, a Harvard professor “considered to be America’s foremost liberal authority on constitutional law,” who “taught constitutional law to Barack Obama and was a key backer of his 2008 presidential campaign.” Other signatories include Philip Alston, the UN Special Rapporteur on extrajudicial, summary or arbitrary executions, Bill Clinton’s former labour secretary Robert Reich, President Theodore Roosevelt’s great-great-grandson Kermit Roosevelt, and Norman Dorsen, the former president of the American Civil Liberties Union.

Tribe, who joined the Obama administration last year as a legal adviser in the Justice Department, but who left his post three months ago, told the Guardian that the treatment of Manning was objectionable “in the way it violates his person and his liberty without due process of law and in the way it administers cruel and unusual punishment of a sort that cannot be constitutionally inflicted even upon someone convicted of terrible offences, not to mention someone merely accused of such offences.”

Yochai Benkler also spoke to the Guardian, stating, “It is incumbent on us as citizens and professors of law to say that enough is enough. We cannot allow ourselves to behave in this way if we want America to remain a society dedicated to human dignity and process of law.” Adding that Manning’s conditions were being used “as a warning to future whistleblowers,” he also said, “I find it tragic that it is Obama’s administration that is pursuing whistleblowers and imposing this kind of treatment.”

As well as alienating nearly 300 legal experts, President Obama has also angered the UN Rapporteur on Torture, Professor Juan Mendez, who, as the Guardian explained, “issued a rare reprimand to the US government on Monday for failing to allow him to meet in private Bradley Manning,” which is “the kind of censure the UN normally reserves for authoritarian regimes around the world.”

Professor Mendez said, “I am deeply disappointed and frustrated by the prevarication of the US government with regard to my attempts to visit Mr Manning.” He added, “I am acting on a complaint that the regimen of this detainee amounts to cruel, inhumane or degrading treatment or torture,” but “until I have all the evidence in front of me, I cannot say whether he has been treated inhumanely.”

[T]he vast majority of states allowed for visits to detainees without conditions. But the US department of defence would not allow him to make an “official” visit, only a “private” one. An official visit would mean he meets Manning without a guard. A private visit means with a guard. Also, anything the prisoner says could be used in a court-martial.

Adding that his mandate was “to conduct unmonitored visits,” Professor Mendez also stated, “I am insisting the US government lets me see him without witnesses. I am asking [the US government] to reconsider.”

In conclusion (as the pressure will no doubt continue to mount against President Obama, who has tried and failed to wash his hands of responsibility for Pfc Manning’s treatment), I’m cross-posting below the complaint by Bruce Ackerman and Yochai Benkler, as promised:

Bradley Manning is the soldier charged with leaking U.S. government documents to WikiLeaks.

He is currently detained under degrading and inhumane conditions that are illegal and immoral.

For nine months, Manning has been confined to his cell for 23 hours a day. During his one remaining hour, he can walk in circles in another room, with no other prisoners present. He is not allowed to doze off or relax during the day, but must answer the question “Are you OK?” verbally and in the affirmative every five minutes. At night, he is awakened to be asked again, “are you OK” every time he turns his back to the cell door or covers his head with a blanket so that the guards cannot see his face. During the past week he was forced to sleep naked and stand naked for inspection in front of his cell, and for the indefinite future must remove his clothes and wear a “smock” under claims of risk to himself that he disputes.

The sum of the treatment that has been widely reported is a violation of the Eighth Amendment’s prohibition of cruel and unusual punishment, and the Fifth Amendment’s guarantee against punishment without trial. If continued, it may well amount to a violation of the criminal statute against torture, defined as, among other things, “the administration or application … of … procedures calculated to disrupt profoundly the senses or the personality.”

Private Manning has been designated as an appropriate subject for both Maximum Security and Prevention of Injury (POI) detention. But he asserts that his administrative reports consistently describe him as a well-behaved prisoner who does not fit the requirements for Maximum Security detention. The Brig psychiatrist began recommending his removal from Prevention of Injury months ago. These claims have not been publicly contested. In an Orwellian twist, the spokesman for the brig commander refused to explain the forced nudity “because to discuss the details would be a violation of Manning’s privacy.”

The Administration has provided no evidence that Manning’s treatment reflects a concern for his own safety or that of other inmates. Unless and until it does so, there is only one reasonable inference: this pattern of degrading treatment aims either to deter future whistleblowers, or to force Manning to implicate WikiLeaks founder Julian Assange in a conspiracy, or both.

If Manning is guilty of a crime, let him be tried, convicted, and punished according to law. But his treatment must be consistent with the Constitution and the Bill of Rights. There is no excuse for his degrading and inhumane pre-trial punishment. As the State Department’s PJ Crowley put it recently, they are “counterproductive and stupid.” And yet Crowley has now been forced to resign for speaking the plain truth.

The WikiLeaks disclosures have touched every corner of the world. Now the whole world watches America and observes what it does; not what it says.

President Obama was once a professor of constitutional law, and entered the national stage as an eloquent moral leader. The question now, however, is whether his conduct as Commander in Chief meets fundamental standards of decency. He should not merely assert that Manning’s confinement is “appropriate and meet[s] our basic standards,” as he did recently. He should require the Pentagon publicly to document the grounds for its extraordinary actions — and immediately end those which cannot withstand the light of day.