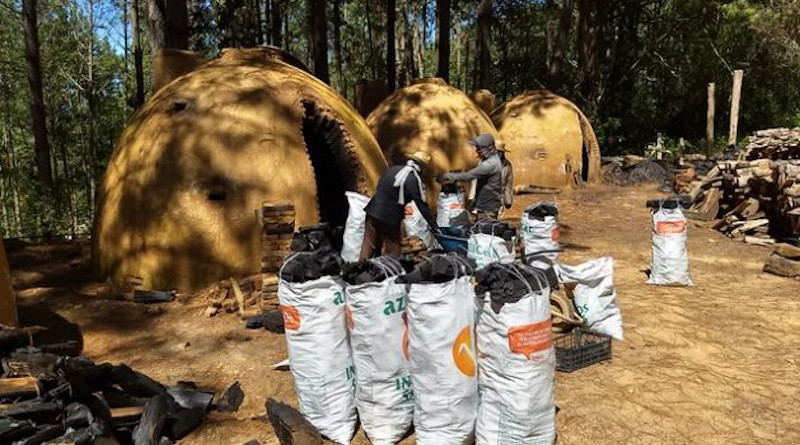 Two women fill sacks of charcoal made in mud igloos in the small town of San Juan Evangelista Analco in the mountains of the state of Oaxaca in southwestern Mexico. A group of women from this Zapotec indigenous village created a charcoal company in 2017, to take advantage of the wood that the community logs sustainably. CREDIT: Emilio Godoy/IPS

Rosa Manzano carefully arranges pieces of wood in a big mud igloo that, seven days after it is full, will produce charcoal of high caloric content.

“Our forest also produces oak, which in the past was only sold as firewood and had little value. But with forest management and the work of women who have organised, we began this project,” Manzano told IPS, as she stacked the pieces of wood neatly and without leaving empty spaces inside the large igloo-shaped ovens.

Manzano belongs to the “Ka Niulas Yanni” – “active women” in the Zapotec language – Group of Women Charcoal Producers. The organisation was founded in 2017 by 10 women and two men in San Juan Evangelista Analco, a Zapotec indigenous municipality of fewer than 500 people, located in the northern highlands of the southern Mexican state of Oaxaca.

With financing from the government’s National Forestry Commission, the women built seven eight-cubic-meter igloo-shaped ovens and set up a warehouse for their community logging project. Under a 10-year plan that began in 2013, the community can extract 1,500 cubic meters of oak wood annually to make furniture and sell wood.

The charcoal makers light the ovens through a hole called a “rozadera”, and through a similar hole they check the progress of the fire and then block up the entrance with mud bricks. As the fire descends through the structure, smoke spews from the igloo’s “ears”.

“We work hard, because there is a market for charcoal, but being pioneers involves an effort,” says Manzano, a married mother of one, whose workday starts very early and ends mid-afternoon. She also works in the restaurant at a community-owned ecotourism site.

The women fire up the ovens twice a month, to produce 23-kg bags of black charcoal, which they sell for about five dollars a sack.

Despite these local initiatives, Mexico is wasting the potential of bioenergy, especially solid biofuels, including all forms of energy from different kinds of biomass.

This alternative source represents 10 percent of final energy consumption, with 23 million users of bioenergy for cooking (especially in rural areas), 10 million for heating (mainly in urban areas), 100,000 small factories and 100 medium and large ones, according to the Thematic Network on Bioenergy (RTB), an association of bioenergy researchers and entrepreneurs.

The installed capacity totals about 400 megawatts, based on raw materials such as firewood for domestic and industrial use, bagasse, charcoal and biogas.

The country also generates some 70 million tons of organic waste per year, which can be used in this area.

In terms of electricity generation, the sector’s contribution is modest – 894 gigawatt-hours (Gwh) – compared to other alternative sources of energy. In the first quarter of 2019, gross generation totaled 80,225 Gwh, up from 78,167 in the same period last year. Gas-fired combined cycle plants produced 40,094, conventional thermal power plants 9,306 and coal-fired plants 6,265.

One technology that is expanding is the biodigester, for the treatment of manure and agricultural waste to obtain biogas and electricity. Some 900 of these operate in rural areas. Of this total, around 300 generate electricity, according to the state-run Shared Risk Trust.

In this country of 130 million people, around 19 million use solid fuels for cooking, according to the National Institute of Statistics and Geography. The main material consumed by 79 percent of these households is LPG, followed by firewood or coal (11 percent) and natural gas (seven percent).

In the southwestern state of Oaxaca, gas and firewood each represent 49 percent of household consumption.

“It is a renewable energy that is largely untapped in the areas of agriculture, urban waste and industry,” said Abel Reyes, president of the non-governmental Mexican Association of Biomass and Biogas.

The expert stressed to IPS that if the country were to develop the sector’s value chain, it would be equivalent to five or six points of GDP, with energy, economic, labour, health and climate benefits.

While bioethanol and biodiesel have boomed over the past decade, their growth now seems to be slowing down due to high costs compared to alternative sources and to competition with food crops.

Teresa Arias, president of the non-governmental organisation Nature and Development, noted that the industrial sector is interested in using waste to fire boilers, while households, hospitals, restaurants and hotels can use pellets of agglomerated sawdust.

“The most viable variables are determined by the market. It has a lot to do with competitiveness against fossil fuels. Solid biomass does not compete with natural gas, and in hotel heating it could compete with liquefied petroleum gas,” she told IPS.

The environmentalist said that “there is enough biomass for electricity, its costs just have to be lower or equal to those of the fuel they currently use. But it couldn’t compete with solar, although mixed systems could be installed.”

Forest and jungle management, agro-industrial residues, forest plantations, sugar cane and agricultural waste offer the greatest biomass potential. Replacing fossil fuels with bioenergy and solid biofuels would mean savings of some 6.7 billion dollars a year, in addition to social and environmental benefits, according to the RTB.

Although Mexico has adopted ambitious goals for bioenergy, the pro-fossil fuel policies of leftist President Andrés Manuel López Obrador, in office since December 2018, have clouded the picture, according to analysts.

The 2017 “Biogas Technology Roadmap” predicts production of between 32 million and 120 million cubic meters of biomethane per year from animal waste by 2024, and 57 million to 100 million by 2030, in the face of barriers such as low production attractiveness and lack of project financing.

With respect to solid biofuels in 2030, the map projects 160 petajoules of energy, 130 of which would correspond to households, 20 to the commercial sector and 10 to government institutions. The joule is the energy measurement unit that is equivalent to one watt per second and estimates the amount of heat required to carry out an activity. Each petajoule represents one quadrillion joules.

Arias, the environmentalist, who is preparing diagnoses of biomass in the north of the country, said the outlook is discouraging, because “there is no defined and determined policy for pushing alternative energies.

“They’re taking a position that looks to the past instead of the future; they’re taking steps backwards after many efforts to have a diverse energy mix that would make us less vulnerable, and to transition to climate benefits,” she said.

In this context, she proposed incentives for their use in households and businesses; adapting commercial technologies to the conditions in Mexico; increasing the efficiency of supply chains; disseminating the benefits of bioenergy; implementing favourable policies for this sources; and designing programmes for rural areas.

For his part, Reyes, from the Biomass Association, called for the design of regional and local policies, aimed at boosting the use of bioenergy with adequate financial support.

Meanwhile, the charcoal makers of San Juan Evangelista know what they want: to take care of the forest, foment self-employment and consolidate their organisation and thus their community.

“We are trying to earn an income, but we are working precisely because we know it has a future. We’ve tried to organise ourselves as women, because in the social sphere it’s difficult to get out,” Manzano said during the day that IPS accompanied their activities in this town, 48 km from Oaxaca, the state capital, and 540 km from Mexico City.

Along with other Oaxacan community-owned companies, the group offers its products on new digital platforms.

Some say the government does not support initiatives like those of her group, but Manzano and her colleagues are confident that wood and charcoal will continue to be available in Mexican kitchens thanks to sustainable efforts like theirs.

*Emilio Godoy is a Mexico-based correspondent who covers the environment, human rights and sustainable development. He has been a journalist since 1996 and has written for various media outlets in Mexico, Central America and Spain.