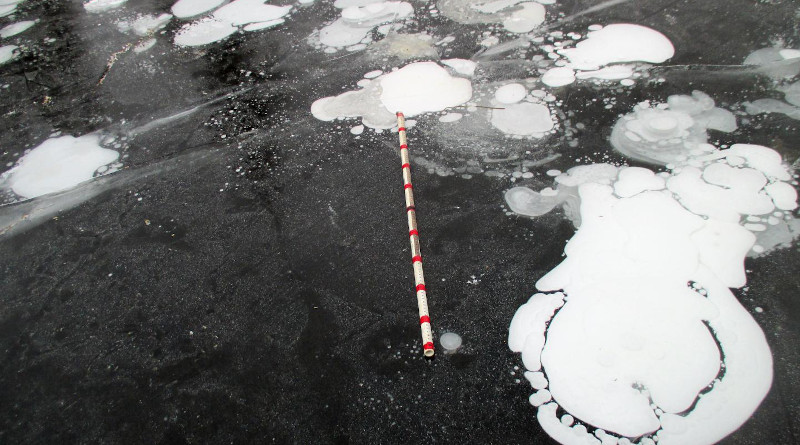 Methane bubbles form underneath ice in lakes in Alaska. These bubbles can be seen from space thus yielding information on methane emissions. CREDIT: Melanie Engram

The greenhouse gas methane is a crucial factor of climate change in the Arctic and globally as well. Yet, methane emissions in the far north are difficult to measure across large regions. In the past, researchers usually scaled-up selective point measurements to generate landscape-scale methane flux estimates.

Now, a group of researchers from Alaska and Germany is reporting for the first time on remote sensing methods that can observe thousands of lakes and thus allow more precise estimates of methane emissions.

The study, in which several researchers from the GFZ German Research Centre for Geosciences were involved, is published in the journal Nature Climate Change. According to the results, the total emissions estimated so far must be revised downwards.

Led by first author Melanie Engram (University of Alaska in Fairbanks, USA), the team investigated more than 5,000 lakes in Alaska using data from a radar satellite. Thus, the researchers estimated methane flux from the influence of gas bubbles on the ice-water interface on frozen lakes. They compared these flux estimates with numerous direct measurements on the ground and with the results of a joint airborne measurement campaign of the Alfred Wegener Institute (AWI) and GFZ.

“Although the remote sensing method only recorded one of three possible emission mechanisms, namely release by rising methane bubbles (and not release by diffusion or transport through plants), this recorded path is often the most effective,” comments co-author Torsten Sachs by e-mail from the research vessel “Polarstern”, where he is currently conducting airborne measurements as part of the year-long MOSAiC drift expedition.

The satellite data and the models based on them show that the bottom-up estimates of methane emissions from lakes in the Arctic have so far been too high.

Moreover, a number of other important findings were obtained for the determination of natural greenhouse gas emissions in the Arctic.

While it was confirmed that small lakes emit more methane than large ones, the study also showed that low-emitting large lakes play an important role for regional flux estimates.

Most methane escapes from so-called “thermokarst lakes” in organic-rich sediments of interior Alaska, formed by the thawing of ice-rich permafrost.