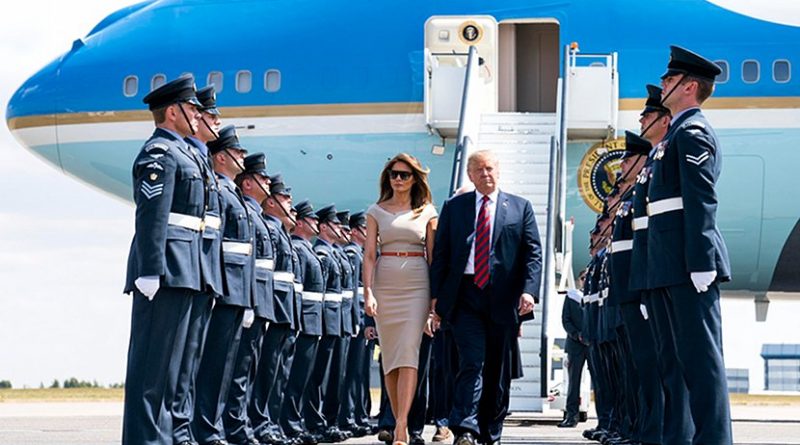 Trump, just prior to arriving in the country, referred to Britain as “a hot spot right now.”

After a 15-minute helicopter ride from Stansted airport, the president and first lady Melania Trump disembarked at Winfield House, the U.S. ambassador’s residence on the edge of Regent’s Park.

They were welcomed by U.S. embassy staffers as the Beatles’ song “We Can Work It Out” played in the background.

The Trumps held hands as they walked to meet Ambassador Woody Johnson, better known as the co-owner of the New York Jets football team.

Their arrival occurs amid a period of instability for Prime Minister Theresa May after her foreign minister, Boris Johnson, and others this week resigned in protest about a softened government plan for the country’s exit from the European Union.

At a news conference at NATO headquarters in Brussels earlier in the day, Trump was asked about Brexit, and he did not hesitate to bluntly comment on the British internal imbroglio, noting Britons had voted to leave the EU, “so I would imagine that’s what they would do. But maybe they’re taking a different route — I don’t know if that is what they voted for” — a reference to May’s compromise plan.

Trump added that it seemed to him Britain is “getting a least partially involved back with the European Union,” adding “I’d like to see them be able to work it out, so it could go quickly.”

Trump has expressed a desire for the United States and Britain to reach an exclusive trade pact.

It is an issue Trump had an opportunity to discuss with May on Thursday evening when he and his wife attended a gala dinner in their honor hosted by the prime minister at the 17th century Blenheim Palace, 100 kilometers northwest of London.

The Trumps shuttled to and from the black-tie event at the birthplace and ancestral home of the late British Prime Minister Winston Churchill by helicopter, allowing them to stay well above the raucous on the streets.

“My message to those coming to the protests in London is that this must be peaceful and good-spirited,” said London Mayor Sadiq Khan in a statement. “To those intent on causing trouble or breaking the law, I simply say: You are not welcome.”

Khan, of the opposition Labor Party and no fan of Trump, added that the demonstrations are not anti-American but rather reflect opposition to “the politics of fear and despair.”

The U.S. Embassy noted planned protests from Thursday through Saturday “expect to attract large crowds,” warning Americans in London to “exercise caution if unexpectedly in the vicinity of large gatherings that may become violent.”

In Brussels, Trump brushed off a question about the protests saying he thought Britons “like me a lot.”

One protest group has been given permission from Friday for a balloon in the president’s image, shaded in orange and dressed in a diaper, known as the “Trump Baby Blimp,” to hover over Parliament Square Garden.

Trump on Friday will spend considerable time in the air, using helicopters to reach Royal Military Academy at Sandhurst, then Chequers — the 16th century manor house of the current prime minister — followed by Windsor Castle, before returning to Stansted Airport.

Ambassador Johnson, speaking earlier to reporters, said Trump “is not avoiding anything” relying on helicopters, rather he is “trying to get as impactful a trip as he can get within a 24-hour period.”

At Chequers, Trump and May will discuss foreign policy, according to White House officials.

Queen Elizabeth II will host the president and first lady for tea at Windsor.

Trump has long spoken of his desire to meet the monarch, but for this queen such encounters with U.S. presidents are old hat having met 10 American leaders since her coronation in 1952.

Trump, however, is the most unconventional of modern U.S. presidents and there is some anxiety in Britain about whether he will adhere to protocol.

The anticipation is evident in a promotional spot running on a British television network which begins with a montage of Trump shaking or grasping hands with a number of foreign leaders.

“How hands on will he be with the Queen?” teases the announcement. “Find out on Sky News.”