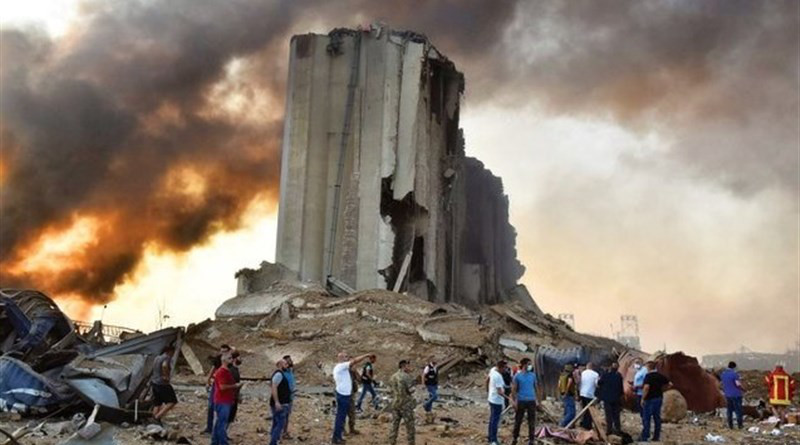 French President Emmanuel Macron warned Iran on Wednesday to stay out of Lebanon as it rebuilds after last week’s devastating blast.

Macron told Iranian President Hassan Rouhani it was essential “for all the powers concerned … to avoid any outside interference and to support the putting in place of a government that can manage the emergency.”
At least 171 people died and more than 6,000 were injured when 2,750 tons of ammonium nitrate exploded in a warehouse in Beirut port last week, devastating large parts of the city and leaving about 300,000 people homeless.

Prime Minister Hassan Diab and his government resigned amid an outpouring of public anger against Lebanon’s corrupt and inept ruling elite, and protesters have also demanded an end to Hezbollah’s grip on the levers of power, armed and funded by Iran.

Macron was the first world leader to visit Beirut after the explosion and has led the international response, hosting a virtual aid conference that raised $300 million in pledges.

“This is the real crux of the problem,” he told Arab News. “Iran, through its proxy, a heavily armed terrorist militia, has wreaked havoc in Lebanon. The Iranians have held the country hostage at gunpoint. Macron has done the right thing in calling them out.”

Al-Shehri said the resignation of Prime Minister Hassan Diab and his government was the first step in freeing Lebanon from the clutches of both Iran and Hezbollah. “But this is by no means enough. If this government is replaced by another which is at the mercy of Hezbollah, then it will be back to square one.

“It is important for France and other world powers to ensure that Hezbollah is disarmed and that it hands over its weapons to the Lebanese army; only then will there be stability. As long as there is a state within a state, nobody from the global community will come forward to rescue Lebanon from the difficulties it finds itself in.”

Al-Shehri said Macron had correctly understood the problem and had done the right thing in warning Iran. “Now he should take this to its logical conclusion and end the nightmare for Lebanon, the Lebanese people, and the region,” he said. “France will find many takers in the international and regional communities in its efforts to clean up the mess in Lebanon.”

French senator Natalie Goulet told Arab News that France and the EU were “playing with fire” over Hezbollah.

“As the only Lebanese party that has never disarmed, its paramilitary and its international network make it a force more powerful than the Lebanese army,” she said. “It is not without reason that many countries, including the US, classify this movement as a terrorist organization.

“It seems to me to be utopian to think that Iran would withdraw support from its proxy.

“And there is a serious risk that Hezbollah will use international financial help for Lebanon to follow its agenda,which is fixed by Tehran. We must not be be blind or naïve.”