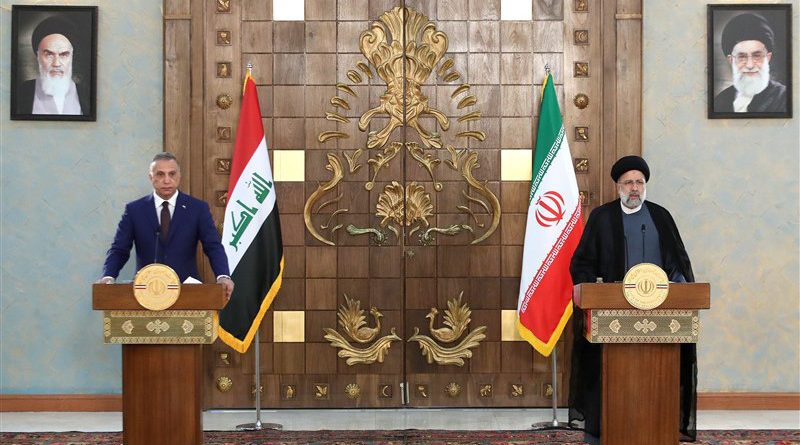 The Iranian president and the visiting Iraqi prime minister held a joint press conference in Tehran on Sunday.

Asked about the topics discussed in the meeting before the presser, Raisi said both sides are determined to expand relations beyond the level of two ordinary neighbors.

Hailing the close political, economic and cultural cooperation between Tehran and Baghdad, the Iranian president said the two Muslim countries play an influential role in the region, the world and international relations.

Pointing to the negotiations about the financial and monetary interaction between Iran and Iraq, Raisi said the two sides have weighed plans for the development of the railroad corridors and completion of a rail route that connects Shalamcheh in Iran to Basra in Iraq.

He also said that the Iraqi premier has given good news about the removal of visa restrictions for the Iranian travelers and has pledged to allow the maximum possible number of Iranian pilgrims to visit Iraq for the Arbaeen season.

For his part, al-Kadhimi said a series of issues of mutual interest have been discussed in the meeting with the Iranian president.

The prime minister said the relations between Iraq and Iran are much closer than those of two neighbors with 1,400 km of common border, saying they have formed close religious and cultural bonds.

Al-Kadhimi touched on the negotiations to carry out joint economic projects, including the Basra-Shalamcheh railroad, saying the two states have also talked about the enhancement of trade cooperation.

Praising Iran for standing with his country in the fight against terrorism, the Iraqi prime minister said the Baghdad government has a consistent and stable policy towards Tehran and will support the Iranian government and nation in all circumstances.

He also praised Iran for its efforts to encourage dialogue.