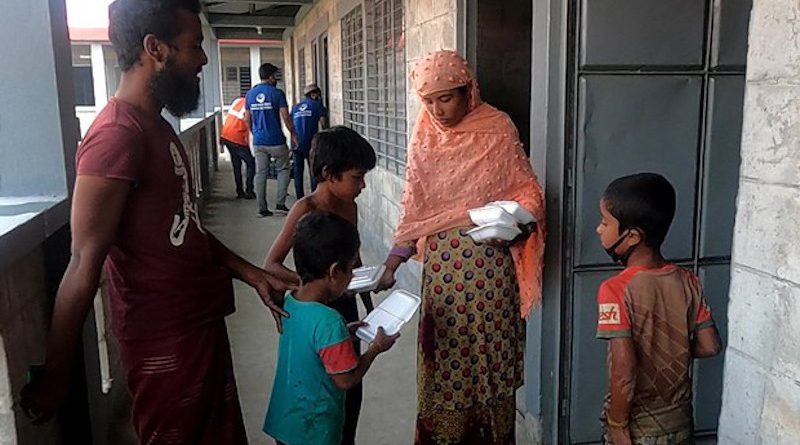 A Rohingya refugee distributes food packages to her children in front of their new home in Bhashan Char, Bangladesh, Dec. 5, 2020. Photo Credit: BenarNews

The ongoing Rohingya crisis has entered its fifth year in August 2021. The scars of genocide and unprecedented violence are still fresh on the minds of 1.1 million Rohingyas currently living in temporary shelters of south-western Bangladesh. Far from healing the mental scars, the fathomless frustration stemmed from the inaction regarding repatriation only added to Rohingya misery. The failure of world community to ensure justice for Rohingyas and to find a sustainable solution has only raised questions about the legitimacy and purpose of the current world order.

The UK has been playing a pro-active role in the Rohingya crisis. The UK has been at the forefront of the global humanitarian response to the plight of the Rohingyas. Within one year of the latest, and so far, the largest exodus of Rohingyas in August 2017, the UK provided £129 million worth of vital food supplies, clean water and medication. As a response to an appeal from the Disasters Emergency Committee (DEC), the British public established remarkable example of generosity by raising £30 million for humanitarian support of the Rohingyas. The UK has also been persistent in its condemnation for atrocities perpetrated by Myanmar against Rohingyas. The current Prime Minister of the UK, Boris Johnson was particularly vocal to the Rohingya cause during his tenure as Foreign Secretary.

Considering the UK’s leading role in global affairs, there is always room to do more. The Rohingyas are ‘the most persecuted minority’, not only in Myanmar but in the whole world. A sustainable solution to Rohingya crisis which ensures Rohingyas’ right to citizenship and fundamental human rights can pave the way to solid democratization of Myanmar as a whole. In hindsight, this is what the early 2010s democratization reform initiatives of Myanmar, supported by the UK and many of its allies, lacked. The political crisis following 2021 coup shows why it is high time to correct the mistakes made. The upcoming 76th United Nations General Assembly can open a new chapter both for the Rohingyas and Myanmar. The post-coup atrocities have generated unprecedented support for the Rohingya cause and inclusive justice from Bamar and other minority groups of Myanmar. Since the UK wants to see a democratic and inclusive Myanmar in Southeast Asia, it should seize the opportunity. Regarding the question of whether National Unity Government (NUG) or Tatmadaw get to represent Myanmar at the UNGA, the UK should leave no stone unturned to ensure that the 76th does not lead to legitimization of the military junta.

The British Foreign Secretary Dominic Rab has, so far, refused to refer Myanmar to the International Criminal Court (ICC) and also avoided repeated urge from rights groups to join the ongoing genocide case at the International Court of Justice (ICJ). This contradicts with the UK’s long-term commitment to ensuring accountability and justice in Myanmar, as a part of sustainable democratic reform. The UK government is one of the countries that helped establish the UN Fact-Finding Mission to gather evidence of human rights violations against the Rohingyas by Myanmar military. In its recommendations, the Mission urged countries to refer Myanmar to the International Criminal Court (ICC). While any attempt of the referring Myanmar to ICC through United Nations Security Council (UNSC) is likely to be blocked by Russian and Chinese veto, such a move from the UK would significantly bolster and validate the demand and drive for accountability. For the same reason, the UK should also the join the genocide case at the ICJ. There is a strong cross-party support for the UK to join the case at the ICJ as evident in a letter signed by 100 British MPs urging Dominic Rab, the UK Foreign Secretary, to join the case in December 2020. As a permanent member of UNSC, the UK can bring in significant financial and legal sources that can invigorate the quest for justice in the Hague.

In line with the road to justice for the Rohingyas, the UK must also bolster its effort to provide humanitarian support for the Rohingyas. In the first quarter of 2021, the Joint Response Plan (JRP), responsible for raising and managing funds for the Rohingya refugees since 2017, has reported an 86 percent shortfall. The fact that the UK has slashed its aids to the Rohingyas by 40 percent is going to directly affect the lives of the forcibly displaced people of Myanmar living in congested shelters of Bangladesh.

There is no denying that the plight and persecution of Rohingyas is deeply rooted in policy blunders and broken promises of British colonial rule. Over the last seven decades, the Second World War has increasingly become a Euro-American affairs; the many sacrifices people of South and Southeast Asia went through have become mere footnotes in history. Thousands of Rohingyas who lost their lives and hundreds of Rohingya villages that went up in flames since the Muslim minority took a pro-British stance in the face of a Japanese invasion, are all but forgotten. To right the wrongs of the past and to facilitate actual democratization of Myanmar, the UK must emerge as the voice of the Rohingyas in the upcoming 76th UNGA session.

*Nayd Riham, a Dhaka-based journalist and independent researcher with an interest in the Rohingya crisis and ethnopolitics of Myanmar and Southeast Asia.