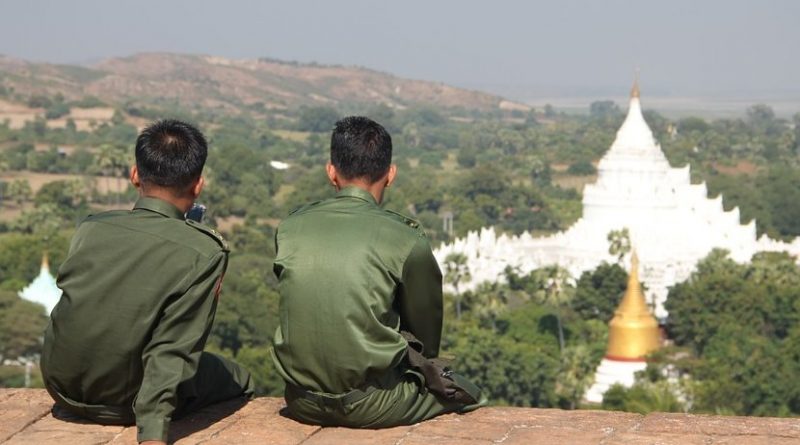 The fourth Anniversary celebration of the National Cease Fire Agreement was observed at Nay Pyi Taw on the 29th of October 2019.  It was not a surprise that the celebrations were in a low key though the function was attended both by Suu Kyi and the Army Chief.

Conspicuous by absence was that of former President Thein Sein at whose initiative, the National Ceasefire agreement was originally drafted and signed. Of the ten Ethnic Groups that had signed the agreement, Representatives of nine them attended the function.  The RCSS (Restoration Council for Shan State) delegation was not allowed by the Eastern Command of the Army to proceed by road to Nay Pyi Taw and were asked to go by air at the last moment on the ostensible reasons of security concerns.  It is said that the real purpose was that the Army did not want the Representatives of the RCSS to mix with the public on their way by road to the capital to attend the function! By not permitting one of the most relevant groups that had signed the cease fire agreement, the Army despite its pretensions to peace and stability had scant regard or respect for the peace process.

In the function, Suu Kyi mentioned in detail the three steps her Government proposed to pursue on the peace process.  The first was to lay down a process for continuing the 21st century Panglong Peace Conference which at the moment appears to have stalled.  The second was to combine the 51 principles of a Federal Democratic Union already adopted by those who had signed the agreement and thirdly to seek agreement on implementing the provisions beyond 2020 General Elections.

Put together the three steps make no meaning in moving forward on the ceasefire process as the signatories who have signed the agreement are light weights who have neither the capacity nor potential to make an impact on the process.  What is left unsaid is that the more important ones like the Wa, the Kachins or the other members of the Northern Alliance are in no mood to sign the cease fire agreement in the near future and in fact have an alternative narrative for the peace process that has nothing in common with the principles laid down in the National Cease Fire agreement.

One of the main reasons given is that the ‘trust deficit’ between the Tatmadaw (the Army) and the ethnic armed groups continues to hobble the process.  Take for example the five rounds of talks that had gone on between the Northern Alliance groups and the Peace mission in the midst of some heavy fighting between the Arakan Army and the Tatmadaw in Rakhine Province or the TNLA and the Tatmadaw.  Both sides seem to agree that the first step before the signing of NCA or political dialogue would be a cease fire.  But the insistence of the Tatmadaw that the ethnic armed outfits should first go back to their original places before any ceasefire could be agreed upon is standing in the way of any agreement for the fighting to stop.

The “inconvenient truth” as some media has described is that the Myanmar Army- the Tatmadaw has been unable to eliminate the ethnic armed groups where in some cases the fighting had continued ever since the independence of the country.  Added to this is the perception of the Myanmar Army that the Ethnic Armed Groups cannot sustain themselves militarily for long and in due course a “military solution” is possible. This has been proved wrong as the Ethnic armed have survived and will continue to demonstrate their strength time and again.  The recent incident on 26th October where a small group of Arakan Army militants seized two ferries carrying 168 people of whom 58 were Police and security personnel and subsequent deaths of the security personnel in the Army’s attempt to rescue the hostages should be an eyeopener for the planners in the Army.

Sometime ago, the Army Chief declared that it is only his army that represents the 45 million people of Myanmar and no one else. With the 2008 Constitution loaded heavily in their favour, the Myanmar Army appears to be under no pressure to make any change in the present policy of dealing with the conflict with the Ethnic Armed Organisations.

It is interesting to see how China which is a major stakeholder for stability and peace in its border is dealing with the Ethnic crisis in Myanmar.

So far, we see that China has limited its role to that of a Convenor for participation of ethnic groups and provide logistical facilities where necessary for the meetings. The focus one notices is more for a “cease fire” rather than pushing the two sides for any political agreement.

Despite its declared policy of noninterference in the internal affairs of other countries, China is still an active participant and a moderator in the conflict between the warring groups that are mostly on China border and the Myanmar government represented by its Peace Mission or the Army.

It was the Chinese Representative Sun Guoxiang who forced the Northern Alliance ethnic groups to attend the 2nd 21st Century Panglong peace Conference in May 2017.

The Chinese strategy till recently has been to work for the continuation of the peace talks without any breakdown.  It is significant to note that China has so far not forced both sides to accept any tactical/strategic/ political deal between the warring factions.  It has also refrained from taking ownership of any move like drafting a peace agreement, working out a peace mechanism or even as mentioned in the Myanmar media set any agenda for political dialogue between the ethnic armed groups and the Myanmar Government and the Army. One cannot fail to compare China’s role with what India did in the ethnic crisis in Sri Lanka where India set the agenda, took ownership and responsibility to implement an agreement that resulted in disastrous consequences.

Of late there appears to be another nuanced change in the Chinese approach to insurgency in Myanmar.

Having realised that a peace deal is not likely to be achieved in the near future, they are now looking for economic development using the Belt Road Initiative as a tool to get both the Government and the ethnic groups to go for resolution of the conflict. At the same time, strengthening of the armed ethnic groups appears to be a deliberate policy of the Chinese to force the Myanmar Army to realise that a military solution is impossible.