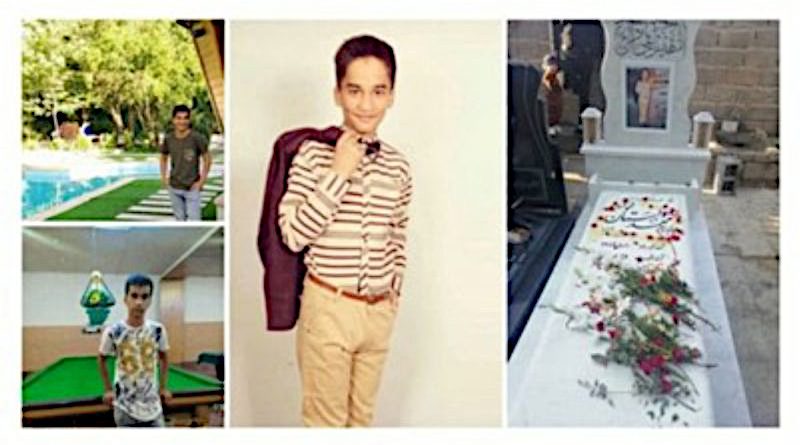 One year has passed since the November 2019 uprising, when hundreds of innocent lives were violently taken by security forces during a protest gasoline price hike. Many bereaved families, however, not only did not receive a clear answer about what happened to their loved ones but were even threatened and harassed by security agents for pursuing the matter.

The Iranian government has so far not identified the ones who ordered and perpetrators of the mass killings in those nationwide protests, instead calling many of the victims “peace disturbers” and thus legitimizing indiscriminate shooting and killing. On the other hand, Mullahs by exerting pressure and threats on the families, tried to register some of the victims as “martyrs”, and to blame their death on “foreign agents”.

Muhammad was very warmhearted and lively. He liked to work and was very interested in robotics. He always had some wires and armature and entertained himself with them and made different things. He was always playing with his friends in the alley, gathering his friends around him. Ever since Mohammad’s death his friends have gathered in the alley and recounted their memories of sacrifices and vivacity of Mohammad. His friends were warning each other if Muhammad’s mother hears our voices it would remind her of him, and she would get sad. Muhammad was in a harry to grow up and start working. He loved to work.

Mohammad Dastankhah, a 15-year-old teenager, was shot in the heart and died in Sadra city on Saturday, November 19, 2019, on his way home from school. One year later, Mohammad Reza Dastankhah, Mohammad’s father, says that their legal pursuit to identify the perpetrator of their son’s murder had not gone anywhere and that their requests had not been answered.

“His mother had gone to court, they told her, she should pay 500,000 tomans to the court account for investigation fees, she paid the amount. The last answer they gave to his mother was that you can get some money for his death. That was their only answer to our inquiry. Do the officials think that if something similar had happened to their child, they would have taken the blood money and gone to work!? If something like this had happened to someone like themselves, it certainly would not have been finished with these outcomes!

The branch investigator  in his report on case referral to court write off says of the “absence of the killer” and then, in order to justify the murder, he first describes the events of November 2019 and uses “the volume of clashes, destruction and fire and aggression of some people towards “Basij headquarters” legitimized the murder and wrote: “The actions of the agents were carried out only in legitimate and legal defense of themselves, and equipment, weapons and ammunition of the Basij headquarters” and “agents in accordance with paragraphs 3 and 8 of the law of deployment of weapons start shooting.” It is unknown how he could justify using deadly force as a self-defense against a 15-year-old teenager!

“This is what happened and it’s over,” judicial and security officials told the Dastankhah family.

Muhammad’s father describes the devastating effects of his son’s death on their family:

“The whole house is falling apart; her mother is nervous and her heart hurts. Every hour we must go to the doctor, I no longer have the taste to do anything, like going to work, or nothing… This is very hard for us to bear; Muhammad’s absence is very hard.”

In addition to the lack of a fair trial and response to the requests of the Dastankhah family, during this time they were threatened by the security agents and interrogated why they shared Muhammad’s photos on social media.

“They said why do you have a web page, delete it. If the life of your other child is important to you, go and sit at home, it is over, what are you looking for?”

“Our life after Muhammad is no longer like the past. You see a child with a school bag. The memory of Muhammad comes to mind! When I see a teenager growing up in height, I say, if Muhammad was alive, how tall he would be now! I really do not know if they are aware of what they had done to their families! Don’t they have consciousness, and don’t they feel at least a bit guilty?! “A year passed very fast but for families created an equivalent of a hundred years of sorrow and gloom.”

She says their family’s only wish is to know why, under which law and with what guilt they killed her brother and who killed him.

Given the attitude of regime officials towards the November 2019 protesters, whether those killed or their families, as well as the sentencing of thousands of detainees in these protests, it is clear that, like in other events such as the 2017 uprising and the downing of a Ukrainian airliner, there is no will to achieve justice in this government.

In the end, it should be said the “litigation” of survivors of this crime to discover the truth and the administration of justice will only be possible with another uprising that will lead to complete overthrow of this regime.