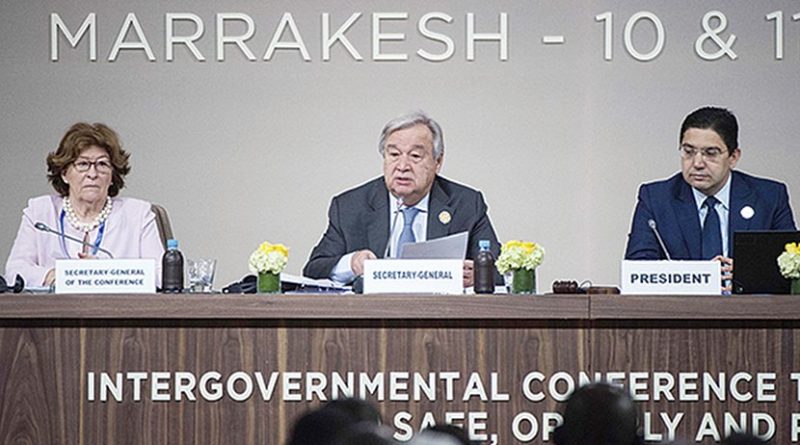 The Intergovernmental Conference to Adopt the Global Compact for Safe, Orderly and Regular Migration, was held in Marrakech, Morocco on 10 and 11 December 2018.

The Global Compact for Safe, Orderly and Regular Migration provides the first international and non-legally binding cooperative framework on migration. It is the result of a comprehensive process of discussions and negotiations among all Member States of the United Nations that started with the New York Declaration in 2016, unanimously adopted at the UN General Assembly in 2016.

The legalization of undocumented immigrants is one of the most contentious issues in any immigration reform discussions. However, Morocco pledged to promote and protect migrants’ rights, focusing more on human rights and combating human trafficking networks. Rules concerning refugees, asylum seekers and, more in general, foreigners living in the Kingdom whose administrative position has not been legalized will change.

King Mohamed VI pushed for the reform on his country’s immigration policies at the recommendation of the National Council of human rights (CNDH) which had demanded public policies to protect migrants’ rights.

The first turn on migration initiated in 2014 was welcomed by the former UN Secretary-General Ban Ki-moon hailing the guidelines of King Mohammed VI to the government to elaborate and implement a strategy and an action plan on migration.

“As one of the first member States to ratify the International Convention on the Protection of the Rights of All Migrant Workers and Members of Their Families (1993), the Secretary-General welcomes the announcement by His Majesty King Mohammed VI, who gave his instructions to the Moroccan government to design and implement an appropriate strategy and action plan with a view to formulating a comprehensive policy on migration”, and “its call for the rights of migrants,” the Office of the Spokesperson of the UN said.

On the occasion of the Intergovernmental Conference held in Marrakech, King Mohammed VI addressed the participants of this landmark event stating that: “The international community can be proud of the page of history being written in Marrakech today. It is taking us a step closer to a new, more equitable, more humane migration order,” said King Mohammed VI in a message to the Conference, opened by UN Secreatry General Antonio Guterres.

“Between unacceptable laxity and the intolerable ‘all-about-security’ approach, there is a course of action which we are initiating today. A course of action, which embraces solidarity-based sovereignty rather than exclusion-centered nationalism, multilateralism rather than ostracism, and shared responsibility rather than institutionalized indifference,” the Sovereign pointed out in the message that was read out by Head ofv the Government Saad Eddine El Othmani.

“After all, this is what it is all about: putting an end to disorder, while injecting humane values into the order,” the Sovereign said.

The challenge for the intergovernmental conference on the global compact for migration is to show that the international community has opted for responsible solidarity, King Mohammed VI said insisting that migration is not a security issue – nor should it become one, and that migrants’ rights cannot be ignored simply because there are security concerns.

Migrants’ rights are inalienable. The side of the border on which a migrant stands does not make him or her more or less human, he said, adding that “addressing security concerns should go hand in hand with socio-economic development policies which tackle the root causes of risky migration.”

Insisting that security concerns should not be invoked to deny mobility, the Sovereign underlined that mobility can actually be turned into a lever of sustainable development, at a time when the international community is seeking to implement the 2030 Agenda.

Alluding to the controversy raised by nationalist and populist movements particularly in Western Europe that argue that the compact could infringe on countries’ national sovereignty, the King made it clear that “the sovereign right of each Member State to determine and apply its own migration policy ought to be fully respected.”

“This conference should show that multilateralism is not about empty chairs, desertion or indifference. Multilateralism is about synergies and about making commitments in which the right to differ is respected. The challenge for this Conference is therefore to unite, in the face of populism, to bring together, in the face of isolationism, and to come up, through dialogue and international cooperation, with meaningful solutions to one of the major issues of our time.”

No single country can, on its own, face up such a challenge. Just as there is no alternative to cooperation, there is no alternative to action, either. The Global Compact is not an end in itself. It will be meaningful only if it is effectively implemented. Viewed from this angle, the Marrakech Conference is, first and foremost, a call to action. And Africa has already responded to this call! It does not intend to be on the sidelines.”

Initially, Morocco is just a step for those illegal immigrants who seek at all costs to reach Spanish territory . But faced with the closure of Europe citadel and strengthened border control, attempts by some groups to force their way into the other side usually result into casualties and victims from both the Moroccan security forces and clandestine . These ensuing attempts have become rare due to the great efforts deployed by Moroccan authorities in their fight against human trafficking.

Today , the number of sub-Saharan illegal immigrants present in Morocco is increasing . Most are desperate to succeed to cross the the Straits of Gibraltar.  Morocco gradually has become their default home ground. However, the ever-increasing flow of illegal immigrants has an unsustainable pressure on Morocco, itself facing a high unemployment rate among its own youth.  Regardless of this challenging situation, Morocco is proud of what it is doing in terms of receiving and integrating migrants. It will keep up this practical, humanitarian approach.

UN Secretary General Antonio Guterres said at the opening of the intergovernmental conference on the Global Compact for Safe, Orderly and Regular Migration that the Pact aims to strengthen “cooperation on international migration in all their aspects”. The UN Chief underlined the importance of this Compact as a roadmap to prevent suffering and chaos, and to provide cooperation strategies that will benefit all.

So today more than 150 countries will join a United Nations conference to adopt a global pact to better handle migrant flows.   UN Special Representative for International Migration Louise Arbour said more than 150 governments had registered for the event in the Moroccan city of Marrakesh set to adopt the accord.   The pact is not legally binding but can provide very useful guidance for countries facing migration, she told a news conference.

“Many challenges will stand in the way of its implementation, not least the toxic and ill-informed narrative that too often persists when it comes to migrants,” she said.

After the adoption of the Marrakech Compact, the UN chief told journalists that “it was a very emotional moment” for him when he saw “the members of the conference unanimously in acclamation” adopt the Compact.

The UN General Assembly is set to adopt a resolution formally endorsing the deal on December 19 in New York.

So, is the international community finally setting off towards a new, more equitable, more humane migration order.