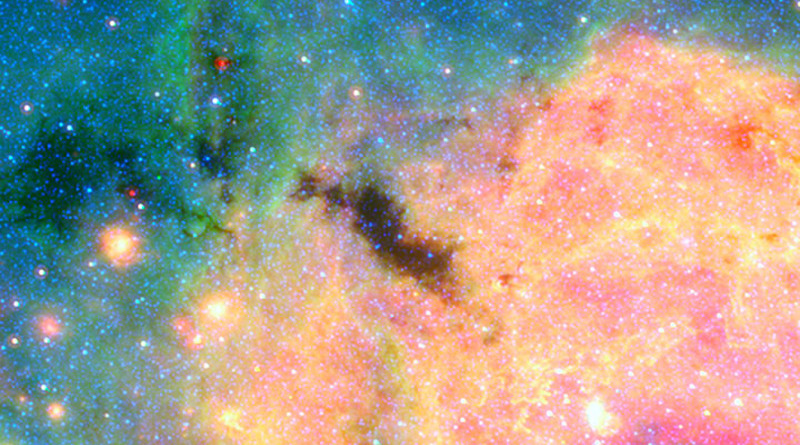 More than 100,000 times the mass of the Sun, the Brick doesn't seem to be forming any massive stars--yet. But based on its immense mass in such a small area, if it does form stars--as scientists think it should--it would be one of the most massive star clusters in the Milky Way galaxy. Credits: NASA, JPL-Caltech, and S.V Ramirez (NExSCI/Caltech)

High-mass stars, which are eight or more times the mass of our Sun, live hard and die young. They often end their short lives in violent explosions called supernovas, but their births are much more of a mystery. They form in very dense, cold clouds of gas and dust, but little is known about these regions. In 2021, shortly after the launch of NASA’s James Webb Space Telescope, scientists plan to study three of these clouds to understand their structure.

“What we’re trying to do is look at the birthplaces of massive stars,” explained Erick Young, principal investigator of a program that will use Webb to study this phenomenon. He is an astronomer with the Universities Space Research Association in Columbia, Maryland. “Determining the actual structure of the clouds is very important in trying to understand the star formation process,” he said.

These cold clouds–which can have up to 100,000 times the mass of the Sun–are so dense that they appear as big, dark blobs on the sky. While they seem devoid of stars, the clouds are actually just obscuring the light from background stars. These dark patches are so thick with dust that they even block out some wavelengths of infrared light, a type of light that is invisible to human eyes and can usually can penetrate through dusty clouds. That’s why they are called “infrared-dark clouds.” However, the unprecedented sensitivity of Webb enables observations of background stars even through these very dense regions.

To understand how massive stars form, you have to understand the environment in which they form. But one of the things that makes studying massive star formation so difficult is that as soon as a star turns on, it radiates intense ultraviolet light and strong and powerful winds.

“These forces destroy the birth environment that the star was created in,” explained infrared-dark-cloud expert Cara Battersby, an assistant professor of physics at the University of Connecticut. “The environment you’re looking at after it formed is totally different from the environment that was conducive to its forming in the first place. And since we know that infrared-dark clouds are places where massive stars can form, if we look at their structure before stars have formed or have just started to form, we can study what environment is needed to form those massive stars.”

Battersby likens the process to baking cookies: As soon as you bake them, they’re totally different than the dough itself. If you’ve never seen dough before, you may not have a good idea of what that baking process would look like. The infrared-dark clouds are like the raw dough before you bake it. Studying these clouds is akin to getting a chance to look at the cookie dough, seeing what goes into it, and learning what its consistency is.

The Importance of Massive Stars

Understanding massive stars and their environments is important for a variety of reasons. First, in their explosive deaths, they release many elements that are essential for life. Elements heavier than hydrogen and helium–including the building blocks of life on Earth–come from inside massive stars. Massive stars have transformed a universe that was almost completely composed of hydrogen to the rich, complex environment that is able to produce planets and people.

Massive stars also produce enormous amounts of energy. As soon as they are born, they give off light, radiation and winds that can create bubbles in the interstellar medium, possibly sparking star formation in different locations. These expanding bubbles could also break up a region where new stars are forming. Finally, when a massive star dies in a spectacular explosion, it forever changes its surroundings.

The study will focus Webb on the following three areas.

The Brick: One of the darkest infrared-dark clouds in our galaxy, this roughly brick-shaped cloud resides near the galaxy’s center, about 26,000 light-years from Earth. More than 100,000 times the mass of the Sun, the Brick doesn’t seem to be forming any massive stars–yet. But it has so much mass in such a small area that if it does form stars, as scientists think that it should, it would be one of the most massive star clusters in our galaxy, much like the Arches and Quintuplet clusters, also in the neighborhood of the galaxy’s center.

The Snake: With a name inspired by its serpentine shape, this extremely filamentary cloud is about 12,000 light-years away with a total mass of 100,000 Suns. Scattered along the Snake are warm, dense dust clouds, each containing about 1,000 times the mass of the Sun in gas and dust. These clouds are being heated by young, massive stars forming inside of them. The Snake may be a section of a much longer filament that is a “Bone of the Milky Way,” tracing out the galaxy’s spiral structure.

IRDC 18223: Located about 11,000 light-years away, this cloud is also part of a “Bone of the Milky Way.” It shows active, massive star formation happening in one side of it, while the other side seems completely quiet and unperturbed. A bubble on the active side is already starting to destroy the initial filament that was there before. While the quiescent side has not started forming stars yet, it probably will soon.

To study these clouds, Young and his team will use background stars as probes. “The more stars that you have, the more different lines of sight,” said Young. “Each one is like a little pencil beam, and by measuring the color of the star, you can assess how much dust is in that particular line of sight.”

The scientists will make maps–basically, very deep images–in four different infrared wavelengths. Each wavelength has a different ability to penetrate the cloud. “If you look at a given star and see that it’s actually a lot redder than you expect, then you can surmise that its light has actually gone through some dust, and the dust has made the color redder than the typical, unobscured star,” said Young.

By observing the difference in color based on these four different measurements in the near-infrared, and comparing that with a model of dust dimming and reddening, Young and his team can measure the dust in that particular line of sight. Webb will allow them to do that for thousands and thousands of stars that penetrate each cloud, giving them a wealth of data points. Since most stars of a given type are similar to each other in brightness and color, any marked differences that Webb can observe are mostly due to the effects of material between us and the stars.

This work can only be done because of Webb’s exquisite sensitivity and excellent angular resolution. Webb’s sensitivity enables scientists to see fainter stars and a higher density of background stars. Its angular resolution, the ability to distinguish tiny details of an object, allows astronomers to discriminate between individual stars.

This science is being conducted as part of a Webb Guaranteed Time Observations (GTO) program. This program is designed to reward scientists who helped develop the key hardware and software components or technical and interdisciplinary knowledge for the observatory. Young was part of the original instrument team that built Webb’s Near Infrared Camera (NIRCam) instrument.

The James Webb Space Telescope will be the world’s premier space science observatory when it launches in 2021. Webb will solve mysteries in our solar system, look beyond to distant worlds around other stars, and probe the mysterious structures and origins of our universe and our place in it. Webb is an international program led by NASA with its partners, ESA (European Space Agency) and the Canadian Space Agency.

Home » Piercing The Dark Birthplaces Of Massive Stars With Webb