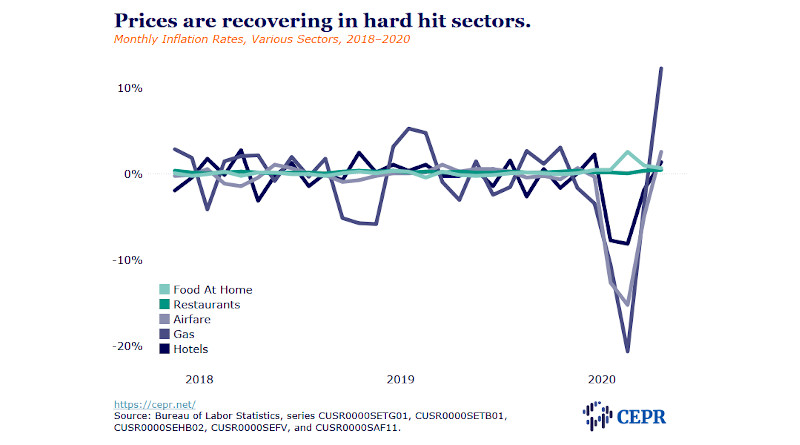 The biggest factor in the sharp rise in the overall CPI was a 12.3 percent jump in gas prices. This follows five months of sharp declines. Gas prices in June were still 23.4 percent below year-ago levels. Food prices rose 0.6 percent, but this is actually slower than the pace of the prior two months.

In particular, we are seeing slower inflation in the food at home category. The June price rise was 0.7 percent, down from 2.6 percent in April and 1.0 percent in May. By contrast, prices are rising more rapidly for restaurant meals. June prices rose 0.5 percent, compared with 0.1 percent in April and 0.4 percent in May. This likely reflects the fact that the restaurants that are open are passing on higher costs associated with maintaining a safe operating environment. We will likely see restaurant prices substantially outpace food at home prices in the months ahead.

Airfare prices jumped 2.6 percent in June after dropping by 15.2 percent in April and 4.9 percent in May. This reflects both some recovery in air travel — although flying is still hugely below year-ago levels — and also efforts to pass on higher costs due to lower capacity on planes.

Apparel is another major category with a sharp bounce back in prices as sales move closer to normal. Prices rose 1.7 in June, after dropping 4.7 percent in April and 2.3 percent in May. They are still down by 7.3 percent from year-ago levels. Hotels prices also rose sharply in June, rising 1.4 percent after sharp drops the prior two months. They are down 16.0 percent from year-ago levels.

Rent is one sector going in the other direction, with both the rent proper index and the index for owners’ equivalent rent rising just 0.1 percent in June. Both had been rising at annual rates of more than 3.0 percent before the pandemic. The last time the monthly inflation rate was this low was in April of 2011 for rent proper and July of 2013 for owners’ equivalent rent. Since most leases are for six months or a year, this figure likely indicates that many of the rents now being negotiated or renegotiated involve actual reductions in rent, as landlords try to keep units occupied.

New vehicle prices were flat in June after rising 0.3 percent in May. Demand for cars has been reasonably strong since the shutdowns were relaxed. Over the last year, new vehicle prices are down 0.2 percent, in line with their pre-pandemic price trend. Used car prices fell 1.2 percent in June and are down 2.8 percent for the year.

Auto insurance prices rose 5.1 percent in June, after falling 7.2 percent in April and 8.9 percent in May. The sharp declines in the prior months were due to rebates insurers paid to drivers who were driving less during the shutdowns. Prices are still down 10.1 percent from year-ago levels, although large increases in future months are virtually certain as the rebates end.

The sharp upward swings in the June data in many sectors are not a surprise. Prices in sectors such as air travel and hotels plummeted along with demand in the months when the shutdowns were strictest. Business is now picking up in these sectors, which also must cope with higher safety-related costs. We are likely to see further price rises in these sectors, but this is not a standard inflationary pressure story. Rather it is a story of one-time, and presumably temporary, cost increases resulting from the unchecked spread of the pandemic.