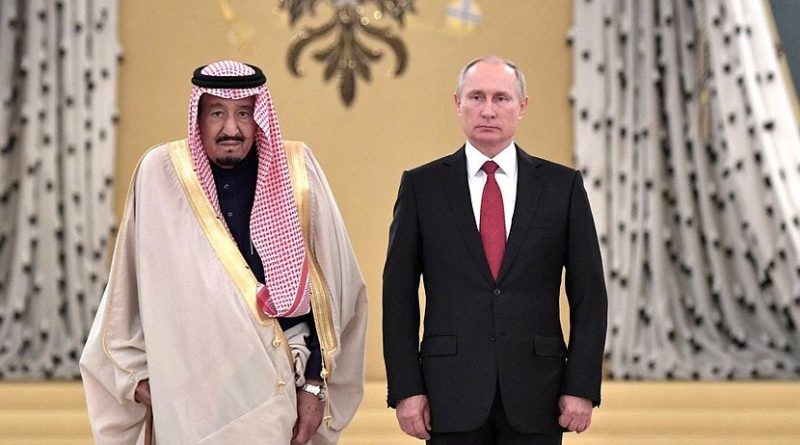 The visit by Russian President Vladimir Putin is another significant step toward the steady and continuous strengthening of relations between the Kingdom of Saudi Arabia and Russia.

“Saudi-Russian relations are stronger today than at any time in the past,” the envoy said.

Putin was the first Russian president to ever visit the Kingdom in February 2007, when he met with the late King Abdullah as well as King Salman, who was then the governor of Riyadh.

Saudi Arabia has been participating in the G20 Summit since the 2008 Washington meeting, which took place during the global financial crisis, highlighting the Kingdom’s economic importance as having the 10th-biggest sovereign wealth fund and the second-largest oil reserves after Venezuela, possessing around 18 percent of the world’s proven petroleum reserves.

“The visit by President Putin is very important not only to both Russia and Saudi Arabia, but to the region and the world as a whole. Both countries are members of the G20. In fact, G20 summits were the stage of frequent meetings between the Russian president and Saudi leaders,” said Krimly.

King Salman and Putin met for a second time at the G20 summit in Antalya, Turkey in 2015, and Crown Prince Mohammed bin Salman met the Russian leader at G20 gatherings in 2018 and this year in Osaka.

Putin’s visit will present a great opportunity for high-level discussions between the two countries to further strengthen and expand bilateral cooperation in many fields at regional and international levels.

Relations have developed through several stages beginning when the former Soviet Union became the first country to establish relations with Saudi Arabia in 1926.

However, over time, relations between the two countries waned.

“The communist ideology of the Soviet Union was incompatible with the Islamic identity of Saudi Arabia. During the Cold War between the two superpowers, Saudi Arabia was strongly allied with the West. We were suspicious of Soviet expansionism, of Soviet support to radical regimes and revolutionary upheavals, and of the Soviet invasion of Afghanistan.”

While there were no diplomatic relations, there were some important common positions between the two countries. More often than not, the two sides voted similarly in the UN in support of the independence of many Arab, African and Asian countries, and defended the rights of Palestinians and the Palestinian cause.

“The second stage saw a resumption of diplomatic relations in 1991. The Soviet Union collapsed, and the Russian Federation was established. However, while relations were maintained and developed, they were not very close,” the ambassador added.

Both sides had other priorities to pursue. The long absence of direct contact meant that each side was not sufficiently familiar with the other. Building trust between the two countries required time.

“The third stage began a few years ago and witnessed a qualitative development and strengthening of Saudi-Russian relations,” said Krimly. “Bilateral visits increased and began to culminate in meetings at the highest levels.”

New fields of cooperation started to flourish, and mutual interests began to deepen. This culminated in King Salman’s visit to Moscow in October 2017, the first official tour of its kind by a Saudi monarch.

The crown prince later visited Russia on several occasions and met Putin, most recently attending the opening ceremony of the FIFA World Cup in June 2018.

In the 2017 state visit by King Salman, the two countries signed 14 agreements and memorandums of cooperation, covering various fields.

“As the Saudi ambassador in Moscow, my workload has significantly increased in the past year, and keeps increasing. The frequency and level of bilateral meetings keep expanding in significant ways.

“When I began my work in Moscow, we would have an average of one bilateral meeting, at the ministerial level, every month. Nowadays, hardly a week passes without such a bilateral meeting taking place,” added Krimly.

At the beginning of October, they had up to three different ministerial delegations at the same time, as well as six delegations from six agencies.

“As a result, several important agreements between the two countries began to materialize and have been implemented. These include military, economic and cultural fields.

“The level of trust and direct contact between the leaders has become high enough to ensure further and systematic deepening and strengthening of bilateral cooperation in all fields.

“Because of the commitment of the leadership of both countries to strengthen relations, I have not faced serious problems. Saudi leaders, ministers and officials were always supportive and responsive. I also found Russian officials and the Russian people in general, very friendly and cooperative,” the envoy said.

Krimly emphasized the importance for both countries of facing up to the challenge of learning to better understand each other. “The stereotypes propagated by Hollywood misrepresented both societies,” he said.

The ambassador stressed that encouraging direct people-to-people contact between the two sides would help increase understanding among the people of both nations.

“For the first time, thousands of Saudis visited Russia during the 2018 FIFA World Cup. They were pleasantly surprised by the warmth and kindness of ordinary Russians, and by the highly modern infrastructure of exceptionally clean and safe Russian cities.

“Like all countries, we may have different views or positions in some areas, but we will continue to discuss them frankly and positively. In brief, areas of common interests and cooperation are continuously expanding, while areas of differences are shrinking.”

TIMELINE SAUDI-RUSSIA RELATIONS IN A NUTSHELL