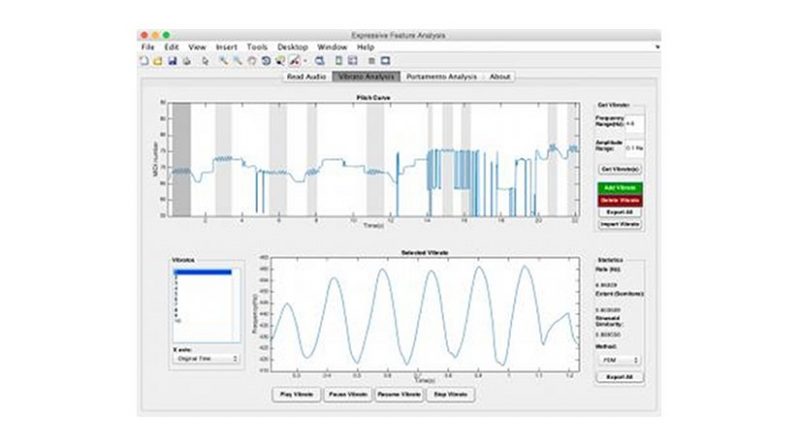 Scientists at Queen Mary University of London (QMUL) are bringing us closer to understanding the musical experience through a novel approach to analysing a common musical effect known as vibrato.

Vibrato is the up-down oscillation in pitch introduced during instrumental or vocal performance, intended to add expressivity and to facilitate sound projection, and commonly used in opera. A well-timed and beautifully executed vibrato can greatly enhance the sound quality of a note, and induce strong emotional responses in the listener.

The new approach to vibrato analysis, published in the Journal of Mathematics and Music, describes for the first time the use of the Filter Diagonalisation Method (FDM) in music signal processing. The technique has origins in quantum physics and is employed to study molecular dynamics and nuclear magnetic resonance.

“We are now one step closer to understanding the mechanics of music communication, the nuances that performers introduce to the music, and the logic behind them,” said project supervisor and co-author Professor Elaine Chew from the Centre for Digital Music at QMUL’s School of Electronic Engineering and Computer Science (EECS).

The technique’s ability to detect and estimate characteristics from very fine slivers of information comes in particularly handy in vibrato analysis and allows researchers to analyse music signals with greater precision than before.

Vibratos typically oscillate at a rate of 4-8 cycles per second, or with a period of 125-250 milliseconds per cycle. The degree to which the pitch is bent up or down can be up to half a semitone. Because vibratos happen so quickly, standard techniques which require a comparatively large window for analysing the music signal have so far struggled to accurately capture their characteristics.

“The FDM algorithm was initially developed to efficiently and effectively explore the complicated quantum dynamical resonances of atoms and molecules. Although musical signals are very different from their quantum counterparts, mathematically they share many similarities, including the characteristics of their resonances,” said Dr Khalid Rajab, project co-supervisor and co-author from QMUL’s School of Electronic Engineering and Computer Science (EECS).

“In fact, we found that, because they oscillate with time, the harmonics in musical signals can be more complicated to analyse than their quantum counterparts,” he added. The research emerged from a project to model the differences between playing on violin and erhu, a two-stringed Chinese fiddle.

Professor Chew said: “When music for a folk instrument like the erhu is performed on a violin, it lacks the stylistic and expressive qualities of the original. One of the major sources of these differences lies in the way in which notes are elaborated (with vibrato) and the way in which the instrumentalists make their transitions between notes (using portamentos). We were interested in creating computing tools that can help reveal these differences.”

The research forms part of the PhD project of Luwei Yang, first author and a China Scholarship Council doctoral candidate and Research Assistant in EECS.

Yang, an avid erhu player said: “In erhu, as in violin playing, vibrato is frequently employed to mimic the liveliness and colourful expressivity of the human voice. Contemporary erhu vibrato styles were deeply influenced by violin techniques, so it is fascinating to dig deeper into characterising the differences between them.”

The researchers hope the new technique will help musicians and music teachers in their quest to achieve the perfect vibrato, assist sound artists in creating more natural sounding vibrato effects in audio production, and enable researchers to map stylistic trends in vibrato use across cultures and time.