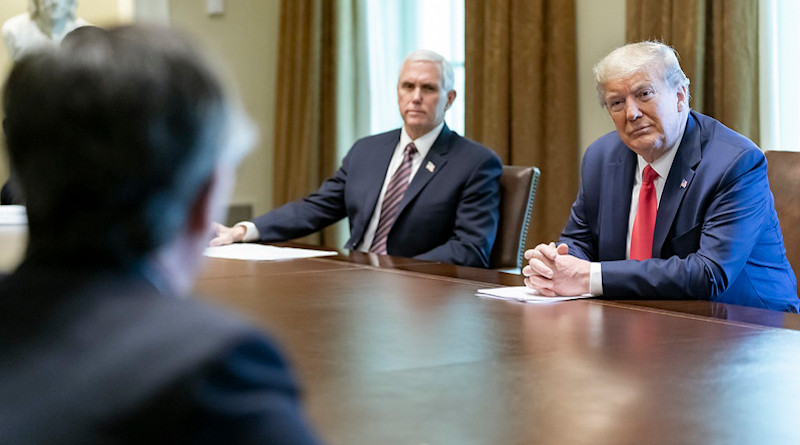 President Trump blames the WHO for his administration’s COVID-19 debacle. In reality, the White House knew about the virus threat already on Jan 3 but chose not to mobilize until late March.

In a recent interview with Fox News, President Trump said that the projections and pronouncements of the World Health Organization (WHO) about the coronavirus pandemic have been routinely wrong.

“Literally, they called every shot wrong,” the president added. “They didn’t want to say where [coronavirus] came from.” Threatening the WHO with the withdrawal of US funding, Trump charged WHO director-general Dr Tedros for siding with “Communist China.”

On April 14, Trump instructed his administration to halt funding to the WHO, as it conducts a “coronavirus review.” It is not clear how he intends to withhold WHO funding, much of which is appropriated by Congress. But it is clear that the review will be conducted by the same administration that delayed the virus response, in the first place. That will virtually ensure a prejudiced outcome.

Why did Trump target the WHO, its projections and its chief? And why did he do it now?

Soon thereafter, he declared in the White House that “[coronavirus is] going to disappear. One day — it’s like a miracle — it will disappear” (Feb 27).

Then, Trump took the blame-game to another level accusing Democrats for politicizing coronavirus, which he proclaimed “their new hoax” (Feb 28).

A day later, he announced again that his administration had the virus fully under control thanking his healthcare advisers (Feb 29) whose virus advice he had rejected – as we today know – since the first week of January.

In March, when the virus was about to have an almost free ride in New York City and the rest of America, Trump suggested that the WHO’s estimate of the global death rate was “false.” He described the virus as “very mild” and suggested that the infected could get better by “going to work” (Mar 4) – a suggestion that virus specialists considered idiotic.

And yet, only a week later, Trump wanted Americans to believe he was taking the virus seriously. ““This is a pandemic,” he told reporters. “I felt it was a pandemic long before it was called a pandemic … I’ve always viewed it as very serious” (Mar 17).

What changed the tone?

Two and half months of delays

The simple answer is a New York Times expose one day before (Mar 16) and the impending presidential election.

As the Times reported, “from the beginning, the Trump administration’s attempts to forestall an outbreak of a virus now spreading rapidly across the globe was marked by a raging internal debate about how far to go in telling Americans the truth.”

What we know with certainty today is that, on January 3, China’s CDC completed the virus gene sequencing, initiated emergency monitoring and notified the WHO and relevant countries and regions about the virus.

As Hong Kong and Singapore began to prepare for the virus that same day, US CDC director Dr. Robert R. Redfield called Alex M. Azar II, Trump’s secretary of health and human services, to tell him China had discovered a new coronavirus. Azar told his chief of staff to inform the National Security Council (NSC) about the matter.

There was reason for hurry. When Trump arrived in the White House three years before, his administration had eliminated NSC’s global health unit that had monitored such virus risks. Now, the administration’s top health executive team began daily meetings in the basement of the West Wing.

Yet, there was no proactive mobilization in the White House. Rather, a long debate began within the Trump administration over “what to tell to the American public.” Meanwhile, cabinet members projected its mishandling on China, which was blamed for not being transparent, faking the case counts and associated deaths.

This odd state of affairs lasted two and a half months.

Faced with the Times expose, one of the greatest failures in U.S. pandemic preparedness and the impending fall election, President Trump declared that – actually – he had always viewed the COVID-19 as “very serious.”

After botching its virus response, the administration still would not disclose the full realities. Instead, Trump blamed the disastrous delay on China, the WHO, its chief and others who had been urging greater mobilization after mid- January.

After China’s CDC had alerted the WHO and its key members about the virus threat, WHO director-general Dr Tedros spoke about the potential risks in a series of international releases. On Jan 20, President Xi declared a national emergency in China. A day later, the WHO began daily situation reports about the virus spread.

On January 30, the WHO declared the virus outbreak a “public health emergency of international concern” (PHEIC). In the subsequent weeks, the WHO, its chief and his executives did whatever they could to alert the international community about the threats. And on March 11, the WHO proclaimed the virus a global pandemic.

The net effect? Almost 2 million COVID-19 cases and over 100,000 deaths which will be followed by the worst global economic contraction since the Great Depression. And an impending carnage that may prove far worse in vulnerable emerging and developing economies.

These nightmares were neither necessary nor inevitable. Most of them could have been avoided. That’s why President Trump ordered the “coronavirus review” – to rewrite the history of how his White House failed America

Four Iranian Christian converts were summoned by the regime’s Judiciary to serve their prison sentence in Tehran’s Evin Prison. According