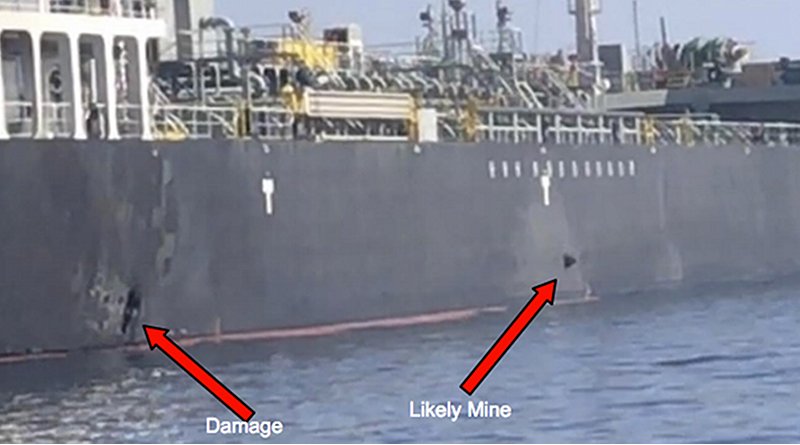 This June 13, 2019, image released by the U.S. military's Central Command, shows damage and a suspected mine on the Kokuka Courageous in the Gulf of Oman near the coast of Iran.

U.S. President Donald Trump, Secretary of State Mike Pompeo and the U.S. military are blaming Iran for the Thursday dawn attack on two oil tankers in the Gulf of Oman.

“Iran did do it,” Trump told Fox News, adding that any attempt by Iran to close the Strait of Hormuz would not last long.

Trump discussed the attacks in a call Friday with Japanese Prime Minister Shinzo Abe, who recently visited Tehran in a bid to ease tensions between the United States and Iran.

The call came hours after the U.S. Navy released video it says shows people on an Iranian patrol boat removing an unexploded limpet mine from the hull of the Kokuka Courageous, one of two tankers carrying petroleum products in the waterway. The tanker is owned by Kokuka Sangyo, a Japanese shipping company. Japan has condemned the attacks.

The other tanker is the Norwegian-owned Front Altair.

Both ships were struck by what U.S. military officials believe were mines. The U.S. Navy’s Bahrain-based U.S. Fifth Fleet received distress calls from both stricken tankers about an hour apart.

IRGC fast attack craft pulled a raft from the Front Altair about 15 minutes before surrounding the motor vessel Hyundai Dubai, which had rescued sailors from the ship, another official told VOA.

Meanwhile, the USS Bainbridge guided missile destroyer approached the Dutch tug Coastal Ace, which had rescued the crew of 21 sailors from the Kokuka Courageous after the unexploded mine was discovered on the hull and they abandoned ship.

The mariners were then rescued by the USS Bainbridge at the request of the master of the Kokuka Courageous and remain on the U.S. military ship, said Urban.

The head of the Kokuka Sangyo shipping company said their ship had been attacked twice, with one explosion near the engine room and another on the right-hand side, near the back.

Speaking to reporters Friday, Yutaka Katada said crew members reported they saw a “flying object” just before the second blast on board.

Pompeo blamed Iran for the attacks Thursday, hours after a defense official told VOA on condition of anonymity that the military was “confident” that Iran carried out the assault on the ships and had “evidence” to back it up.

“Taken as a whole, these unprovoked attacks present a clear threat to international peace and security, a blatant assault on the freedom of navigation, and an unacceptable campaign of escalating tension by Iran,” Pompeo told reporters at the State Department.

Iranian Foreign Minister Javad Zarif said Thursday the timing of the latest apparent attacks was “beyond suspicious” because the Japanese prime minister was in Tehran meeting with Supreme Leader Ayatollah Ali Khamenei.

On Friday, Zarif tweeted the U.S. “immediately jumped to make allegations against Iran without a shred of factual or circumstantial evidence.” Zarif also accused the U.S. of engaging in “sabotage diplomacy” during Abe’s visit to Iran.

British Foreign Secretary Jeremy Hunt said the attacks were “deeply worrying” and that Britain believes Iran was behind the attacks. “While we will be making our own assessment soberly and carefully, our starting point is obviously to believe our U.S. allies,” Hunt said in a statement.

China said it was deeply concerned about tensions in the region and called for restraint. “Nobody wants to see war in the Gulf,” said Foreign Ministry spokesman Geng Shuang. “We hope all relevant parties remain calm and exercise restraint.”

U.N. Secretary-General Antonio Guterres voiced his concern about the rising tensions in the region.

“I want to say how worried I am with the recent developments in the Gulf. We believe that the truth needs to be clearly established in relation to these attacks. We believe that responsibilities need to be clearly defined. And, as I said to the Security Council, the world cannot afford a major confrontation in the Gulf.” Guterres also said he had not seen the video the U.S. Navy released.

League of Arab States Secretary-General Ahmed Aboul Gheit was asked whether he was ready to point fingers at anyone for the incident. He replied by saying, “The facts will be revealed, I’m sure; it’s only a matter of time. As it is established — the facts — we will take positions.”

The Gulf of Oman is next to the Strait of Hormuz — the strategic waterway that is a vital shipping lane. About 30% of the world’s seaborne crude oil travels through the strait.

Global oil prices jumped 4% to more than $62 a barrel after the attacks.

Last month, the United States accused Iran of using mines to attack four oil tankers off the coast of the United Arab Emirates, an accusation Iran has denied.

Margaret Besheer and Wayne Lee contributed to this report.