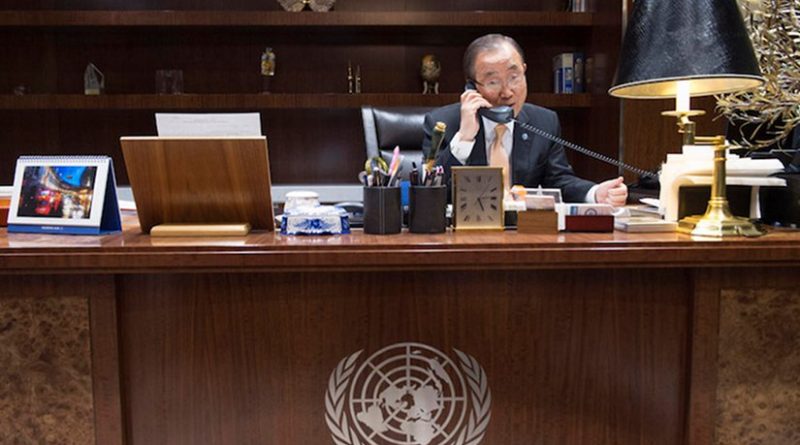 UN Secretary-General Ban Ki-moon speaks by phone with Donald Trump, President-elect of the United States on 11 November 2016. Photo via IDN.

Three days after having congratulated Donald Trump on his election as forty-fifth President of the United States in a statement he read out to the press at the UN Headquarters in New York, Secretary-General Ban Ki-moon has in a phone call on November 12 commended the President-elect’s calls for unity – and this with apparent satisfaction.

On November 9, Ban said in a statement to the press: “In the aftermath of a hard-fought and often-divisive campaign, it is worth recalling and reaffirming that the unity in diversity of the United States is one of the country’s greatest strengths. I encourage all Americans to stay true to that spirit.”

Ban remarked that today’s global challenges demand concerted global action and joint solutions, and added: “As a founding member of the United Nations and permanent member of the Security Council, the United States is an essential actor across the international agenda. People everywhere look to the United States to use its remarkable power to help lift humanity up and to work for the common good.”

The Secretary-General whose term ends on December 31, twenty days before Trump’s inauguration as President on January 20 in Washington D.C. said: “The United Nations will count on the new Administration to strengthen the bonds of international cooperation as we strive together to uphold shared ideals, combat climate change, advance human rights, promote mutual understanding and implement the Sustainable Development Goals (SDGs) to achieve lives of peace, prosperity and dignity for all.”

Ban stressed the need to mobilize around the principles and common values of the UN Charter more than ever.

These remarks reflected grave concern at the United Nations about the disdain Trump expressed for the world body on the whole during the election campaign. “After eight years with an extremely engaged multilateralist Obama administration, many diplomats fear the U.S. will return to the darker days of George W. Bush, who pursued his foreign policy outside the United Nations,” according to the Voice of America (VOA).

As the Voice of America recalled, in March, at a speech to the American Israel Public Affairs Committee (AIPAC), Trump spoke of “the utter weakness and incompetence of the United Nations,” suggesting he had no love for the organization.

Trump also said the concept of global warming “was created by and for the Chinese” to hurt U.S. manufacturing.

According to the readout issued by his office on November 12, Ban expressed “confidence that the United States and the United Nations would maintain their traditional strong ties of cooperation to advance peace and security, sustainable development and human rights throughout the world”. The readout said, the UN Secretary-General and President-elect Trump “agreed to stay in continued contact”.

This has given rise to the hope that the President-elect might be willing to receive before the end of the year outgoing UN Chief and his successor António Guterres, who assumes office on January 1.

Despite persistent concern, the UK newspaper Independent reported that Ban “has spoken of his confidence that Donald Trump will distance himself from his campaign rhetoric and address global issues such as climate change during his presidency”.

The newspaper quoted Ban saying about Trump: “He has made a lot of worrying statements, but I am sure that he will understand the whole importance and seriousness and urgency. The presidency may be important, but humanity and all our lives and our planet Earth are eternal.”

However Dev-Ex, “the media platform for the global development community” said on November 9: “Overall financial support to the UN by the U.S. could have ripple effects across different agencies.”

The U.S. contributed 22 percent to the UN’s 2016-2017 core budget and more than 28 percent to the 2016-2017 peacekeeping budget, marking the maximum contribution any country is allowed to give, according to General Assembly rules, wrote Amy Lieberman. Japan and then Germany follow as the next largest donors.

Lieberman added: The U.S. is also a top donor to major U.N. organizations, including the UN Refugee Agency — giving about $1.5 billion there this year — as well as the World Food Programme and the United Nations Development Programme. These two organizations have consistently looked to the U.S. as their prime government supporters, with $1.48 billion in funding and $83 million, respectively, this past year.

Other agencies, such as U.N. Women and the United Nations Environment Programme, are somewhat less dependent on the U.S. for their core contributions, but still count the U.S. as a top 10 donor.

While UN diplomats are keeping their fingers crossed, President-elect Trump’s disdain for the United Nations is not an exceptional occurrence in American politics. In fact complaints about the UN surface regularly in the U.S. mainstream media too.

Conflict between the U.S. and the UN predates the collapse of the Soviet Union in 1991. In 1971, the UN adopted Resolution 2758 – which affected the admission of the People’s Republic of China and the removal of the Republic of China (Taiwan) – despite objections by the U.S. government. The U.S. government changed its own China policy shortly afterward, however, so the conflict between the UN and U.S. foreign policy was short-lived.