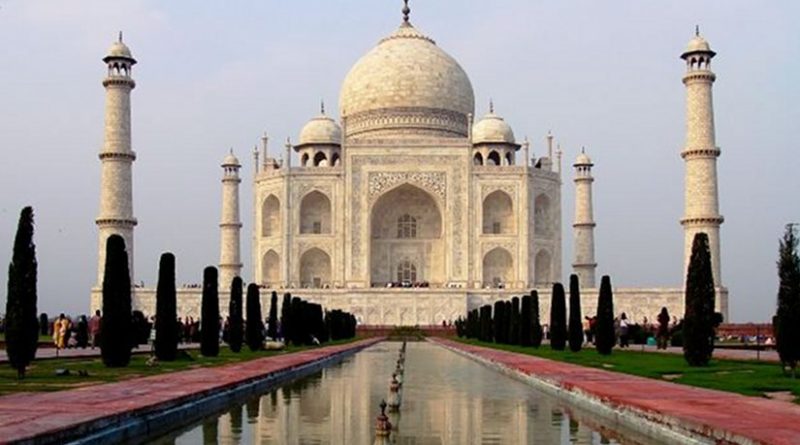 This is not the first time when political contestation on controversy over Taj Mahal turned into a communal debate. As far back as in 2005 when Mulayam singh Yadav was the chief Minister of Uttar Pradesh, his cabinet colleague Azam Khan created a controversy over the ownership of Taj Mahal and supported the demand of the U. P. Sunni Wakf Board that this medieval monument which was on a grave be handed over to the Sunni Wakf Board. In fact the UP Sunni Wakf Board maintained that it comes under the property of the Wakf and thereby should be controlled by the Sunni Muslims. The move was however challenged by the Archaeological Survey of India and its present position is unknown. Some Muslims also demanded that Taj Mahal should be allowed for Namaj. The issue was viewed in political circle as an effort of the Samajwadi Party to appease the Muslims. Countering the claim of the Muslim leaders, the Vishwa Hindu Parishad claimed that the Taj Mahal was built after demolishing a Shiva temple on the plea that in the sealed basement of the monument contains the “pillars of a temple” and demanded that it should be declared as temple. Recent remark of BJP MLA Sangit Som that ‘Taj Mahal is a blot on Indian culture’ is also viewed as an ideological reflection of his party though the BJP has denied it.

Whether it is the ownership controversy over Taj Mahal initiated by the Muslim leaders or the claim of the VHP or the remark of Sangit Som, in absence of any authentic medieval record it is difficult to prove who is correct except the prevalent historical view that the fifth Moghal Emperor Shahjahan built Taj Mahal in the memory of his wife Mumtaj Mahal, who died in 1631, while delivering the fourteenth child within eighteen years of her married life. Her dead body was temporarily buried at Burhanpur in Madhya Pradesh. It was later exhumed and reburied on the Taj ground in Agra.

The main source about the history of Taj Mahal is the Badsahh Namah (History of Shahjehan reign) written by the paid chronicler of the Emperor’s contemporary writer Abd al – Hamid Lahori. Badshah Namah’ is basically a court document of Shahjehan. Epigraphic accounts and data of the foreign travellers as Peter Mundy Traveenier and Burnier, who visited Agra contemporarily, are also used as corroborative materials. With these base materials tourists, scholars and historians expanded their ideas on Taj only when the British regime developed one of the hundreds of monuments of medieval age for tourist attraction. Prior to that “few Indian artists have written about Taj” (Pal, 1989, page 194 as quoted in ‘Tourist at the Taj’ by Tim Edensor, London, New York, 1998, page72).

“The notion that the Taj Mahal is the supreme romantic building of a fabulous, imaginary romantic building emerged out of colonial classificatory schemes and fantasies” (‘Tourist at the Taj’ by Tim Edensor, London, New York, 1998, page72). For diplomatic reasons, the British deliberately devalued the pre medieval heritage of Indian civilisation by giving preference to the monuments of Muslim period. It was the reason that “Most western tourists articulate notions that the TAJ is a symbol of India, and continue to rank it in global terms” (Ibid. page 75). This author also quoted Pal, who asserted that “both the romance and image of the Taj were largely a creation of the British in the last quarter of eighteenth century” (Pal, 1989, 199-‘Torist at the Taj’ page 194). These observations suggest that glorified writings on Taj were mostly fantasies.

It is said that glorification of any worldly item or event is abjured in Islam. Even in Saudi Arabia there is no tradition for glorifying the funeral of its Kings and they are buried in a common graveyard. Abtesham Qureshy, a columnist in Pioneer on August 11, 2005 said, “in true tradition of Islam, ‘glory be to Allah alone, the Almighty’. Contrary to this spirit of Islam, which is still followed in its birth place, the fifth Moghal Emperor Shahjehan (1628-1658) exhumed the dead body of his ‘most beloved’ wife Mumtaj Mahal from her temporary grave in Burhanpur and housed it in a magnificent monument popularly known as Taj Mahal. Some historians described it as ‘representative of the glorious Moghal period and a unique gift of the medieval age to the people of India’. Glorification of Taj Mahal as ‘a dream of marble’, ‘immortal teardrop on the cheek of time’, ‘a monument of love’ etc. therefore may not fit in the Islamic tradition of simplicity.

Another point relating to violation of Islamic tradition by Shahjehan was the extravagant expenditure over Taj Mahal. Encyclopaedia of Indian heritage edited by Prof. Ramesh Chandra described Taj Mahal as the most extravagant monument ever built for love. The story goes that had his son Aurangzeb not deposed Shahjehan, he could have built a second Taj of black marble to house his own grave. The estimated cost of the monument is “a little over three crores of rupees of Shahjehan time” (Encyclopaedic Survey of Islamic Culture – Edited by Mohammad Taher, 1997, page 275). ‘Badshah Namah’ gave rupees fifty lakhs as cost of Taj Mahal. 20,000 workers were engaged for over 12 years for completion of the monument. Despite the condition of common people, who lived in ‘abject poverty’ during his reign, Shahjahan remained extravagant. “While the emperor continued his extravagant spending on the construction of the Taj Mahal, a famine raged in Gujarat and Deccan, causing thousands of deaths. Peter Mundy, an employee of the English East India Company, made a harrowing journey from the English trading station at Surat to Burhanpur and beyond. An account of his travels and quotes from official Moghul documents are found in ‘The Peacock Throne’ by Waldemar Hansen”(‘The Taj Mahal’ by Myra Weatherly, Lucent Books, London, 2003, page 47). “At night Mundy’s party pitched their tents in the only space available – among the corpses scattered everywhere.” “Life was offered for a loaf, but none would buy” (Ibid.).

Against the pathetic living condition of common people, Shahjahan spent crores of rupees of his time and constructed Taj Mahal, Lal Qila and Jaamaa Masjid perhaps at the corpse of humanity. The above historical records suggest that Shahjehan even violated the principle of Jakaat (gift to poor and needy), which is one of the five basic principles of Islam namely Kalma, Namaaz, Roza, Zakaat and Haj. His extravagant expenditure over Taj was therefore against the Islamic tradition of jakaat. A poem -‘Ek Shahanshah ne daulat ka sahara lekar, ham garibon ke Muhabbat ka udaya hai mazak’ (A king with the help of his wealth has derided the love of we the poor) is often quoted against the glorification of Taj.

Without realising the danger that any issue having communal overtones might further widen the centuries old communal divide, the Sunni Wakf Board deliberately generated a confrontational debate with a view to play politics on this World famous monument. Some books as well as papers uploaded in web sites appeared with potential arguments that the Hindu palace could have been “converted by decree and some minimum face lifting to a Mughal tomb” etc. A paper entitled ‘An Architect looks at the Taj Mahal Legend’ by Professor Marwin H.Mills, Pratt Institute, New York referred to Badshah Namah of Lahori and said, “As there was a tract of land (Zamini) of great eminence and pleasantness towards the south of that large city (Agra), on which before there was this mansion (Manzil) of Raja Man Singh, and which now belongs to his grandson Raja Jai Singh, it was selected for the burial place (Madfan) of that tenant of paradise Mumtaz).” The writer also questioned the ASI for blocking the scientific dating of Taj. He said: “Why has the Archaeological Survey of India blocked any dating of Taj by means of Carbon – 14 or thermo-luminescence? Any controversy over which century the Taj was built could easily be resolved. [Radiocarbon dating of a piece of wood surreptitiously taken from one of the doors gave 13th century as a possible date. But more data is needed]”(Ibid.).

In the background of extravagant expenditure over Taj by Shahjenan even at the cost of his starving subjects, whether it was a religious monument in the true spirit of Islamic tradition is a debatable point. He might have created even a Wakf for the upkeep of Taj but will such endowment pass the scrutiny under the true spirit of this pious, religious or charitable institution?

Taj is included in the list of international heritage and the ASI is responsible for its upkeep, preservation and protection. Sunni Wakf Board might be under the impression that it would bring back this monument to its pristine glamour. But historical discussion suggests that even during the reign of Shajehan the upkeep of the Taj ‘suffered from neglect and vandalism’. His son Aurangzeb after his visit to the monument found extensive leakage in various parts of the tomb, mosque and assembly hall and accordingly wrote to his father regarding the damage caused by rains. How can the Wakf board ensure better maintenance of Taj than the Archaeological Survey of India? How will the Mutawalli (manager) be prosecuted when large sums will be transacted in the case of Taj Mahal. Should the Shariat courts deal or the regular courts? Certainly the GOI will not permit prosecution under Shariat for criminal.

The Shia descendants of the royal family of Avadh have already protested over the claim of Sunni Wakf Board in the plea that Mumtaj Mahal, whose grave is housed in Taj Mahal belonged to Shia Sect of Muslims and if any claim is staked over this monument, it could be only by the Shias. They however, “appealed to the Prime Minister Manmohan Singh to intervene in the politics over the Taj and save the monument of love from the web of controversy” (Pioneer dated July 17, 2005).

The point is that the vote seeking political leaders can go to any extent if it suits their political interests. Ironically, the Muslim masses fall somewhere between the poles of absolute loyalty to the Indian political system and complete contempt against and as a result they are exploited by the vested interests. Sunni Wakf Board too for its political game exploits this situation. Today it is Taj Mahal, tomorrow it may even be Red Fort. Ironically, such never-ending divisive game has become a part of contemporary politics.

The purpose of this discussion must not be seen as criticism of any individual or institution. It is just an attempt to stir the conscience of both the Islamists and the Hindu nationalists to see that their discordant political cross fire does not affect the reputation of this world famous monument. Dating if need be can be done by the Archaeological Survey of India at any suitable time.

One thought on “Taj Mahal: An Avoidable Controversy – Analysis”