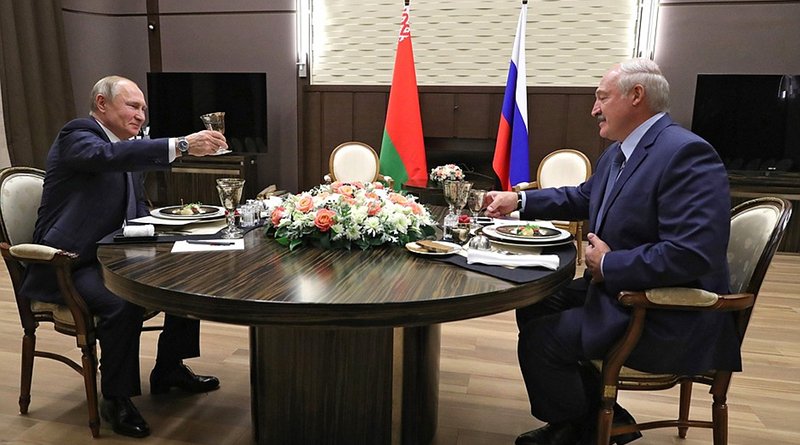 Belarus and Russia are in talks to accelerate the creation of a unified state. The news followed leaks in September this year in which Russian media outlet Kommersant stated that Russia and Belarus were planning to form an economic confederacy by 2022 and that December 2020 would herald the signing of the necessary documents.

The idea of a unified state goes back to the Union State Treaty signed in 1999 and many believe that all of the current Moscow-Minsk talks amount to simply putting on a show to prove to the public that the two states have been sincere about the integration throughout the past 20 years.

It was expected that the December 8 meeting between presidents Vladimir Putin and Alexander Lukashenko would produce official signatures towards the coalescing of vital state structures. For example, before their meeting it was announced by the Belarusian foreign ministry that the countries were working on the creation of a unified parliament.

However, the Belarusian president argued before the summit that no concessions would be made. “I don’t want to cross out everything I’ve done with you, the people, and having created a sovereign independent state … now toss it aside and hand it over,” the president said in an address to his country’s newly-elected parliamentarians.

However, the Kremlin’s announcement that “key issues in our bilateral relations, including the prospects for deepening integration” would be discussed drew rare protests in Belarus. Angered by the potential deal, mostly young Belarusians headed towards the government headquarters in the Belarusian capital. They carried signs reading “It’s not integration, it’s an occupation” and “The president is selling our country”.

But the meeting ended in the same way as have numerous attempts made in the past by the heads of state to reach a compromise.

The weight on the Russian economy is at the heart of the discord. If for years Moscow has been willing to subsidise lower energy and gas prices for Belarus, there now appears to be a growing consensus among Russia’s ruling elites that Moscow can no longer continue with the practice.

Though the subsidies have indeed proven economically disadvantageous for the Russians, they nevertheless have been, and will continue to be, a primary tool of Russian geopolitical pressure on Belarus. Thus, various hints in the Russian media allude to the fact that should Belarus agree to a closer economic integration, lower energy prices would follow. In response, Belarus insists that any further integration must be preconditioned on the handling of bilateral economic issues. One would argue that both sides agree on the end-point of the negotiations—closer integration—but disagree on the timetable.

Though Lukashenko often criticises Russia, he has been quite consistent that he intends to follow through with a deeper integration with his country’s giant neighbour.

Traditionally, Russia has extended its geopolitical influence across three major vectors over the centuries: the Western front (Eastern Europe, Ukraine, Belarus, the Baltic States); the South Caucasus; and Central Asia.

In the South Caucasus, the Russians appear to have reached the limit of their influence. There is little more they can do to further increase their already extensive influence over Armenia, and over Georgia through the breakaway territories of Abkhazia and Tskhinvali. Azerbaijan will likely manage to continue along its more or less independent foreign policy path.

In Central Asia, Russian moves are easier to anticipate, but the region is not a primary theatre for Moscow’s foreign policy.

It is thus Russia’s Western front—its border with Europe—which still serves as a major theatre in which Moscow hopes to reverse its as yet unsuccessful foreign policy and gain geopolitical leverage over the economically expanding EU and militarily powerful Nato.

Moscow’s influence in Eastern Europe over the past 18 or so years has diminished substantially. Ukraine is largely lost, and though it is fashionable to talk about how Russia has re-emerged as a major power in the region, as proven by the annexation of Crimea and the war in Donbas (Eastern Ukraine), the reality is that Russia has added yet another antagonistic country to its border.

There is little chance that Russia will be able to enhance its position in Ukraine without resorting to military force. Even then, from a long-term perspective, it would be tough for Russia to confront a Ukrainian military most likely reinvigorated through western aid and further anti-Russian economic sanctions.

In the Baltic States, the Russians can hope for very little to increase their influence in the region. The Nato/EU umbrella is powerful enough to thwart such ambitions.

This leaves Belarus, the country which can be seen as most susceptible to Russian geopolitical influence in upcoming years. Economically and militarily, it relies on Russia. There is a lack of foreign policy diversification that is a source of both stability and instability for Minsk and it creates much leeway for Russian moves. The ongoing negotiations on deeper integration could in fact be placed within this framework.

The negotiations could indeed be used by Moscow to make Minsk station Russian armed forces on its soil (or open an air base). A good excuse for this is the fact that the US has withdrawn from the Intermediate-Range Nuclear Forces Treaty (INF), while Nato has increased its presence near Russian frontiers. The case would be that it has become urgent for Russia to use Belarus and the Kaliningrad exclave as forward-defence territories.

The next scheduled Putin-Lukashenko meeting, pencilled in for December 20, is likely to be contentious. Though there is an expectation that an agreement on integration will be reached, more probable is that many problematic questions will remain unresolved. However, over time, throughout 2020, Lukashenko’s negotiation tools will quickly erode as Russia’s pressure mounts. For Moscow this is not so much about obtaining benefits from the Belarusian economy, which is nearly 20 times smaller than the Russian economy, it is rather about forestalling Western moves.

It is notable that while Lukashenko has been discussing integration with Russia, he has also made some interesting moves towards the West. The US has resumed diplomatic contacts with Belarus, while visa regulations have been eased for Belarusians travelling to Europe. Moreover, Lukashenka also paid a visit to Austria and several months ago hosted a US delegation headed by John Bolton, while he was still US President Donald Trump’s national security advisor.

It is unlikely that the Russians are not troubled by these diplomatic developments, even though they are small-scale. The problems Moscow faced in Ukraine in 2013-2014 will ensure the Russians move much more swiftly when it comes to Belarus.

This article was published by Intellinews