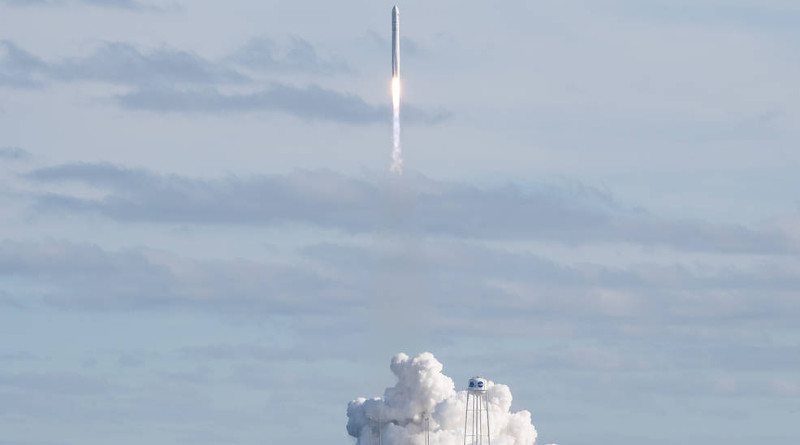 A Northrop Grumman Cygnus resupply spacecraft is on its way to the International Space Station with more than 8,000 pounds of science investigations and cargo after launching at 3:21 p.m. EST Saturday from NASA’s Wallops Flight Facility in Virginia.

The spacecraft launched on an Antares 230+ rocket from the Virginia Mid-Atlantic Regional Spaceport’s Pad 0A at Wallops and is scheduled to arrive at the space station at about 4:05 a.m. Tuesday, Feb. 18.

Expedition 62 astronaut Andrew Morgan of NASA will use the space station’s robotic arm to capture Cygnus, and NASA’s Jessica Meir will monitor telemetry during rendezvous, capture, and installation on the Unity module’s Earth-facing port. The spacecraft is scheduled to stay at the space station until May.

This delivery, Northrop Grumman’s 13th cargo flight to the space station, the second under its Commercial Resupply Services 2 contract with NASA and designated NG-13, will support dozens of new and existing investigations.

Included in the scientific investigations Cygnus is delivering to the space station are:

The Mochii investigation provides an initial demonstration of a new miniature scanning electron microscope with spectroscopy. Mochii will demonstrate real-time, on-site imaging and measurements of micro- and nanostructures aboard the space station. This capability could accelerate answers to many scientific inquiries and mission decisions and serve the public as a powerful and unique microgravity research platform.

Astronauts experience bone loss in orbit, stemming from the lack of gravity acting on their bones. OsteoOmics investigates the molecular mechanisms that dictate this bone loss by examining osteoblasts, cells in the body that form bone, and osteoclasts, which dissolve bone. A better understanding of these mechanisms could lead to more effective prevention of astronaut bone loss during space missions.

Phage Evolution examines the effects of microgravity and radiation exposure on phage, viruses that destroy bacteria without harming human cells, and bacterial host interactions, including phage specificity for a bacterial host and host resistance to specific phages. A better understanding of the effects of microgravity and cosmic radiation on bacteriophages and hosts could result in significant developments for phage technology, ultimately helping protect the health of astronauts on future missions.

(Do Not) Light My Fire

These are just a few of the hundreds of investigations currently being conducted aboard the orbiting laboratory in the areas of biology and biotechnology, physical sciences, and Earth and space science. Advances in these areas will help to keep astronauts healthy during long-duration space travel and demonstrate technologies for future human and robotic exploration beyond low-Earth orbit to the Moon and Mars through NASA’s Artemis program.

This is the second time two Cygnus spacecraft will be in flight at the same time, as the NG-12 vehicle remains in orbit after departing from the station on Jan. 31. The Cygnus spacecraft will remain at the space station until May before it disposes of several thousand pounds of trash through its fiery reentry into Earth’s atmosphere.

The Cygnus NG-13 spacecraft for this space station resupply mission is named in honor of U.S. Air Force Maj. Robert Lawrence, the first African American astronaut selected by any program, specifically chosen for the Air Force’s Manned Orbital Laboratory Program in June 1967. Lawrence died in an F-104 Starfighter aircraft accident at Edwards Air Force Base, California six months later at the age of 32.