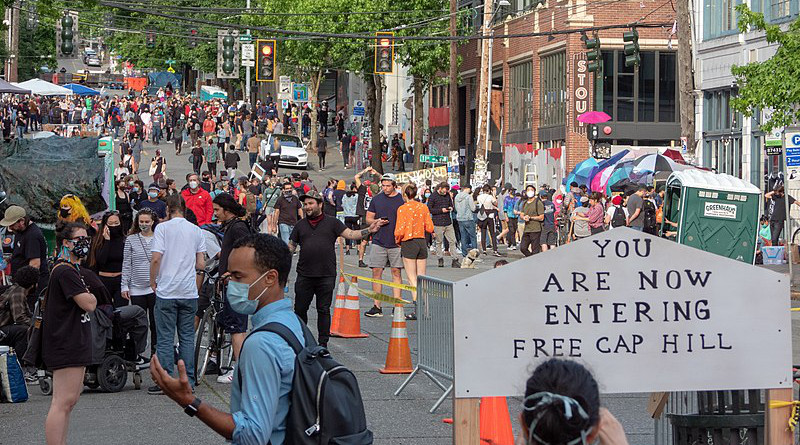 The Capitol Hill Autonomous Zone (CHAZ) is an area of several city blocks in Seattle that has been taken over by a group of people unconnected with the government. They have established a police-free zone and are now busily administering this territory.

Is this a voluntary socialist commune? A free enterprise zone? Are the new inhabitants who have seized control of the area legitimate homesteaders or illegal squatters, that is, trespassers? Who are now the proper owners of this acreage, of the buildings, roads, parks, and houses therein?

From a libertarian perspective, we must first distinguish between (previously) city government–owned property and that of the private storekeepers, homeowners, and other private citizens. As to the latter, the analysis is easy: they should remain in control of their property, and if the CHAZ folk interfere with their continued use of these possessions of theirs, they are in the wrong. But what about public property? CHAZ now possesses the streets, police stations, libraries, museums, post offices, parks, opera houses, and other assets previously in government hands. Who, now, has a right to take charge of all of these goods?

Suppose we were privatizing this area under Rothbardian rules. Who would obtain which government assets? “Homesteading” and “Rothbard” are not synonyms in the English language, but in the present context they might as well be. All of these resources would belong to the owners of private property in the area. However, there is one difficulty in concluding that control of this material properly belongs to them and not to the CHAZites: these locals did nothing to claim ownership. They did not lift a finger in objection to governmental property in their area. One part of homesteading, to be sure, is to “mix one’s labor” with virgin territory. But, another is to declare ownership. Rather, the CHAZers did precisely that. They actually seized control of illicit statist property. At the very least then, even if the previous owners were to be given a portion of these statist goods, the CHAZ people would certainly be owed what might be considered a “finder’s fee.”

Of course, implicit in the Rothbardian notion of homesteading is that it is open to just about anyone, except for criminals. The actual possessors of CHAZ, as of this writing, are members of Antifa, a criminal organization, guilty of vast mayhem, looting of private property, assault, threats, etc. So they cannot be the proper owners of the goods in question. But suppose that instead of Antifa a group of Rothbardians took on this role (we pass quickly over the point that the powers that be in Seattle and Washington State, although looking on somewhat askance but also benignly at CHAZ, would crush without mercy any free enterprisers who acted as they have, in a similar manner to what happened to David Koresh in Waco).

Would the ownership of the libertarian CHAZers be legitimate, not of the private hotels, restaurants, shops, houses, and condos in this six-block area, but, rather, of the public facilities? It is difficult to see why not. After all, according to strict Rothbardianism, these amenities are not—cannot be—legitimately owned by a coercive government. If this is so, then they are unowned and therefore available for the taking by the next homesteader to come down the pike. And that would be this passel of hypothetical Rothbardians, not the owners of the private facilities who long acquiesced in paying compulsory taxes to support them.

Another theory, prevalent in libertarian circles on this matter, has been put forth by Hans-Hermann Hoppe and by Jeff Deist in this recent article. In this Hoppean view, the proper owners of the government roads, streets, parks, libraries, museums, etc., are not the libertarian homesteaders. They are but trespassers. No, the appropriate titleholders are the long-suffering taxpayers. And which organization is their agent? Why, the very government that has long been abusing them in this manner.

The Hoppean solution to the problem is open to several objections. First, Hoppe is a world-class anarcho-capitalist. There is at least a certain tension, not to say a blatant self-contradiction, in such a scholar holding out the state apparatus as the agent of the tax victims. No, the government is not their agent; it is their abuser. Hoppe here is in the unenviable position of taking on the role of a progovernment anarchist. So much for deontology.

Second, this thesis also faces a pragmatic difficulty. Remember, the would-be homesteaders here are all Rothbardians. They will attempt to engage contractually with the home and business owners along the hypothetical lines of what would have occurred had free enterprise been the order of the day right before the time of settlement. For example, the road owners will not charge the locals gigantic fees for usage of their holdings to the locals. Rather, they will require an amount that would have arisen had they attracted businesses to locate along their thoroughfares before anyone had located there. This hypothetical fee level would have been voluntarily agreed upon. And, ditto for use of the parks and other features of the urban landscape.

But Hoppe’s theory would say nay to these arrangements. This author would place in charge, as their “agent,” the very institution responsible for the deviation from pure Rothbardianism in the first place. Thus, the implication of Hoppe’s theory would be a very conservative one, conservative in the worst sense. What would be conserved, in this view? It would be the reinstitution of government control over these premises. The anarcho-libertarian homesteaders would be considered illegal squatters and arrested for their supposed violation of private property rights—the roads, parks, etc., presumably owned by the taxpayers. To see the falsity of this, let one of these citizens try to sleep in a government park or library overnight; he will soon become acquainted with their real owner. It is not him. Not even close. Under Hoppeanism, there would be no way for the ancap libertarians to “seize the streets.” The roadways would be forever in the hands of the evil state.

That is not the libertarianism of the Rothbard variety. (I full well acknowledge that Rothbard himself would not allow the “bum” in the public library. He would side with Hoppe in this matter. I speak here, then, of the platonic version of Rothbardianism that would exult in such a ruination of public property.) Either we take the libertarian rejection of public property seriously, or we do not. If the latter, we reduce the power and accuracy of this philosophy. My motto in matters of this sort is the following: “If it moves, privatize it; if it does not move, privatize it. Since everything either moves or does not move, privatize everything. A CHAZ undertaken by Rothbardians is a move in the right direction.

*About the author: Walter Block is the Harold E. Wirth Eminent Scholar Endowed Chair in Economics at Loyola University, senior fellow of the Mises Institute, and regular columnist for LewRockwell.com.