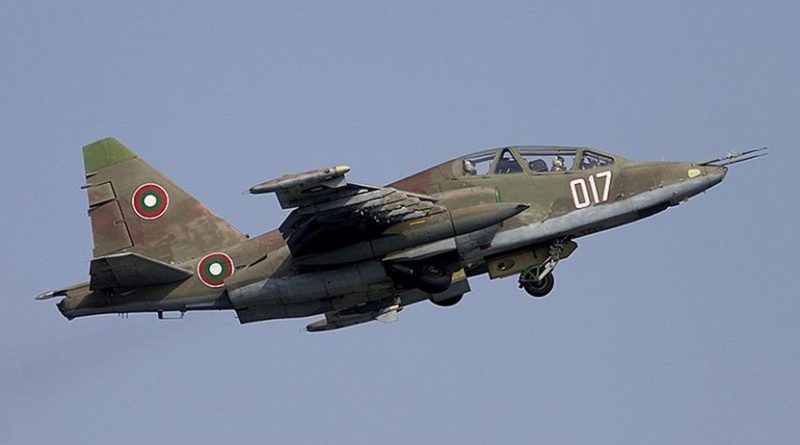 Bulgaria’s Ministry of Defense (MoD) has announced a tender for Russian and Belarusian state-owned companies to overhaul its Su-25 close air support aircraft, marking the latest in a decade’s worth of false starts and reversals plaguing Bulgaria’s efforts to replace aging Communist-era equipment. It also raises the question of whether US and NATO leaders are doing enough to support Bulgaria’s transition into the Western alliance. The short answer? No.

Ever since its accession to NATO in 2004, Bulgaria has struggled to bring its defense capabilities in line with alliance standards and ensure compatibility with other NATO militaries. Its fleet consists mostly of Soviet-era Su-25s and MiG-29s. NATO requires Bulgaria maintain at least one squadron of twelve planes in fighting shape; out of 16 aircraft in the Bulgarian Air Force, only seven meet that standard.

As a result, in February 2016, the Bulgarian parliament begrudgingly authorized NATO to help protect its air space due the state of its own planes. Matters worsened in October 2017, when pilots outright refused to fly their MiG-29 jets due to concerns about the safety of the aircraft.

Successive Bulgarian governments have faced the dilemma of either pouring money into repairing Soviet-era equipment or buying unaffordable replacements from NATO partners. Sourcing parts and maintenance from Russia creates an inherently vulnerable supply chain. Each replacement engine for Bulgaria’s Soviet jets has to be certified by the Russian Aircraft Corporation MiG, making their supply contingent on relations between the two countries.

Unfortunately, purchasing Western aircraft has also proven equally problematic. Despite periodic efforts at brokering purchase agreements with Western manufacturers, the country has frequently been forced to fall back on stopgap measures. Bulgaria, along with all other Balkan NATO member countries, is not meeting the NATO pledge to contribute 2% of its GDP to defense spending, although having one of the lowest GDPs per capita in the alliance makes it a difficult bar to meet.

But money isn’t the only issue. Some of the delays in military reform stem from domestic politics. Bulgaria’s largely pro-Russian President Rumen Radev, of the opposition Socialist party and former head of the air force (not to mention a former MiG-29 fighter pilot), was indirectly accused by the ruling Citizens for European Development of Bulgaria (GERB) party last October of trying to derail the procurement of used F-16s from the US and Portugal. With Radev at the head of the committee overseeing the acquisition, the board torpedoed the offer with no apparent legal basis by imposing additional requirements in violation of the original investment plan.

Those tensions have resurfaced this year. In June, the Bulgarian parliament authorized $2 billion to be spent on acquiring sixteen fighter jets and 150 combat vehicles. The MoD called for bids from seven countries — the United States, Portugal, Italy, France, Sweden, Germany and Israel. In July, however, Radev lashed out at GERB officials for sending a delegation to Washington headed by Deputy Minister of Defense Atanas Zapryanov. The Bulgarian president accused his political rivals of acting unfairly to the other countries preparing bids.

Should these cycles of infighting really come as a surprise? The strange entanglement between Sofia and Moscow dates back to the Cold War and the chaotic 1990s. Bulgaria’s fighter jets are hardly the only front on which these complicated ties have laid deep roots which have proven hard to shake off. One look at Bulgaria’s problematic energy sector, for example, is enough to discern how Bulgarian leaders try to avoid falling between two stools – usually by opting for the Russian one.

This past May, both Radev and Bulgaria’s ostensibly pro-Western Prime Minister Boiko Borissov undertook trips to Russia to meet with Vladimir Putin. Each man focused on the energy sector. Radev proposed the revival of the South Stream gas pipeline under the new name “Bulgarian Stream.” Borissov happily announced Gazprom’s Turk Stream 2 pipeline would come to Bulgaria as opposed to Greece.

Energy cooperation between Moscow and Sofia has not been limited to gas. In June, Bulgaria’s parliament voted to revive the Belene nuclear power plant. The Russian-built facility was suspended in 2012, partly due to concern the plant would lead the country into further dependence on Russian energy. Borissov himself called it “the corruption scheme of the century” at the time, though he has since flip flopped on the issue. The Russians will make another bid to complete the project and they look poised to retake the deal.

Just as with its aircraft, Bulgaria’s energy decisions have left it torn between Russian and Western partners. While Radev and Borissov solicit Putin’s partnership on gas pipelines and Belene, Bulgaria is simultaneously seeking to wind down longstanding cooperation agreements with Western power plant operators AES and ContourGlobal. The government went so far as to ask the European Commission in 2014 whether its power purchasing agreements with the companies constituted illegal state aid. Between them, these two companies supply roughly 20% of Bulgaria’s energy supply. Without the purchasing agreements, however, they have made clear their investments in the country would no longer be viable.

Sofia’s state aid concerns don’t seem to extend to domestic companies. After the European Commission moved to fine Bulgaria’s state-owned Bulgarian Energy Holding and its subsidiaries for abusing their dominant market position, the Bulgarian parliament voted last year not to recognize the Commission’s findings. The two sides are still trying to pick their way through the impasse.

Does Bulgaria’s energy intransigence spell trouble for its NATO defense obligations? Hopefully not. To make sure the defense debate does not go down the same troubled path, Washington in particular could reconsider how much financial support it is providing to the countries it wants to buy American equipment. The U.S. Foreign Military Financing program has allocated only about $40 million to be shared among all nine former Eastern Bloc NATO members over the past several years. With Bulgaria clearly of two minds on its alignment and Moscow willing to be generous, the US should strongly consider loosening its purse strings.