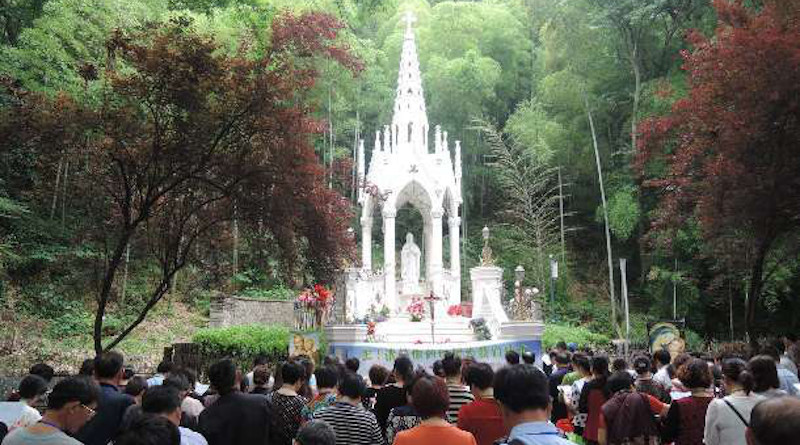 Catholics praying at a Sheshan Marian grotto in the Chinese city of Shanghai in 2015. (UCA News file photo)

As the Vatican looks to extend its pact with China on bishops’ appointments, the communist nation has accelerated efforts to arm-twist underground priests to join the state-sanctioned open church.

The Church aims to normalize relations with China by extending the agreement, Vatican Secretary of State Cardinal Pietro Parolin told media in the Vatican on Sept. 14.

The provisional agreement signed in September 2018 expires in October, two years after it took effect. But local Catholics said communist officials had intensified a crackdown on the underground church in recent months.

In southeast China’s Jiangxi province, several underground priests have been issued notices banning them from celebrating the liturgy on grounds that they do not have state recognition as priests.

One such notice to a priest said that starting Sept. 1, “you are not allowed to practice any religious activity in religious clergy’s capacity.”

The priest has not been recognized as religious clergy because he has not reported to the government’s religious affairs department as the state’s regulations require, the notice said.

The Regulations on Religious Affairs that China’s communist regime issued in 2004 and revised in 2017 prohibit persons without official recognition from engaging in religious professionals’ activities.

The revised regulations do not recognize the underground church and its priests, but they can function as priests after registering with the government and by joining the state-run church.

Local Catholic Paul told UCA News that the government was trying to choke the underground church by forcing priests to join the official church.

He said such efforts increased after September 2018 when the Vatican and China signed the agreement on appointing. But the details of the temporary pact have still not been made public.

Peter, another local Catholic, said that in the past the government only talked about the regulations. “But officials have become serious about it now” after the Vatican-China agreement was signed.

Another local Catholic, Joseph, said some underground priests continue their ministry in secret and parishioners attend their liturgical services in secret. “In some places, they gather weekly, but in some places monthly and in others only once in six months,” he said.

The situation during such Masses is “very tense. We have to send parishioners on lookout duty. Our main aim is to keep the priests from being arrested,” Joseph said.

Joseph, who was sentenced to five years in prison for his participation in a liturgy in the 1990s, said the present situation of the underground church is worse than it was a decade ago.

“Now, we have no leaders and the church is deeply divided. The local church has split into three groups,” Joseph said.

Besides the open church, the underground church is divided. One group follows late Bishop Thomas Zeng Jing-mu and the other follows current Bishop Johannes Peng Weizhao.

The Vatican appointed Bishop Peng in 2012 and he was secretly consecrated a bishop in 2014. He replaced Bishop Zeng, who retired in 2012.

The situation is also complicated by a 1985 government move that merged open church communities in five dioceses in Jiangxi province as Jiangxi Diocese.

However, underground church communities continued to follow the Vatican demarcation. They do not have churches now. “They celebrate Masses in homes to live their faith,” Joseph said.

For the Vatican, the Sino-Vatican agreement may have been an expression of Pope Francis’ desire for friendly relations with China. “But the Chinese government is using it to force the underground church to join the open church,” Joseph said.

He said a vicious campaign tarnishing the Vatican and Pope Francis goes on in China, which tells Catholics that the Vatican has betrayed the underground church by accepting the state-run church.

Home » China Stifles Underground Church As Vatican To Extend Accord