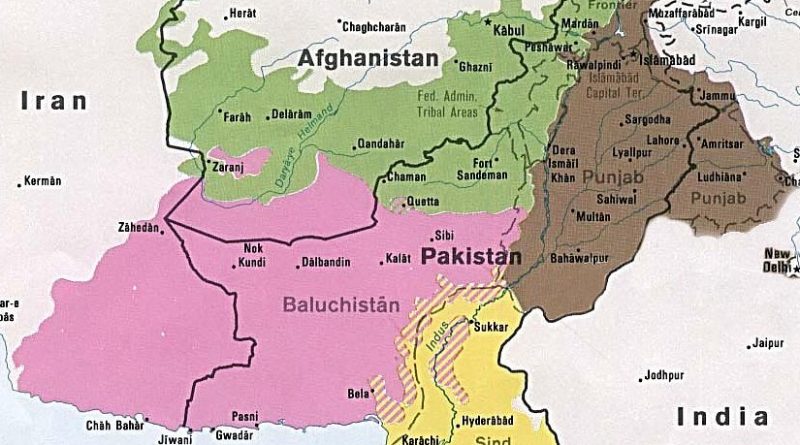 As infrastructure projects in Greater Balochistan come to be, governments across South and Central Asia should prepare for what will most likely turn into the region’s next hotbed of violence. Baloch across the region must be included in regional governments’ decision making processes or investors should prepare for the rural ethnic Baloch to thrust their projects into the dustbins of history.

Until they are afforded influential autonomous positions within national, provincial, and local political institutions; until ethnic Baloch can confidently see themselves as equal partners in directing regional development initiatives; until they are tangibly integrated within all growing goods/service distribution networks, direct foreign investment will continues to be a very dangerous undertaking.

Greater Balochistan – southwestern Afghanistan, southeastern Iran, and western Pakistan – has recently encountered a windfall of infrastructure development. As China assists their Pakistani counterparts in constructing and operating the deep-water port of Gwadar, less than 200 kilometers away India and Afghanistan have begun constructing their Iranian equivalent at Chabahar. Both of these projects, and the infrastructure networks emanating from them, are laying the groundwork for a movement of peoples yet unseen in the region.

Though home to a diverse number of ethnicities, this region is populated most heavily by ethnic Baloch, who harbor near no representation in any of the three governments aforementioned. Having waged a rebellion in Pakistan for decades, usually beyond the view of international news media, ethnic Baloch in Afghanistan and Iran have retreated as refugees to foreign lands or faced bleak economic prospects that is their desolate corner of the world.

Each country’s marginalization of ethnic Baloch has occurred all too intentionally. The Baloch in Pakistan are well aware of Islamabad’s exploitation of their natural resources for the sole benefit of Punjab and Sindh. Baloch in Iran and Afghanistan have been sacrificed as pawns in the water conflicts of their respective countries since the 1950s. As Shia dominated Tehran has exacerbated the rhetoric of the region at the expense of potentially rebellious Sunni Baloch, Afghanistan has perpetuated the ecological disaster that was formerly the Helmand River wetlands system. Thus far Baloch initiated outright conflict, as in Pakistan, and strategic patience, employed in Iran and Afghanistan, have returned few tangible results. The arrival of gas pipelines and railways goods might change the current abused, yet quiet, perspective of the locals.

Although internationally coordinated development projects have the potential to make Greater Balochistan an affluent trading hub, little has been done to address the security and grassroots development of the region. Rather, all governments involved have utilized the political sensitivity of the area to further nationalist agendas threatening to inflame already existing tensions.

In recent years, Iran has violently bolstered its border with Afghanistan as a means to combat a steady stream of refugees and opium. Iranian border guards frequently shoot to kill economic migrants, officials have built walls in certain areas, walls that divide a once porous border of intra-community trade, and Tehran frequently utilizes the threat of migrant mistreatment and deportation to flex its will at Kabul.

Over the past several months, Pakistan has encouraged a policy of regional destabilization aimed at increasing Afghan economic dependence on the will of Islamabad. In August, a key period of Afghan export trade, Pakistani officials closed the Wesh-Chaman border crossing for nearly two weeks causing millions of dollars of perishable fruits to waste away. This incident is commonly understood by political theorists to be an example of Islamabad’s determined economic skirmishes with Kabul regarding little more than national agendas. It is more than redundant to stress the Pakistani state security apparatus’ support of local Taliban militias, support again aimed at destabilization of what Islamabad sees as an unfavorable regime in Kabul.

India, historical adversary of Pakistan, all the while continues to harass Islamabad at its flanks newly in Balochistan. While attempting to justify Indian actions in Kashmir, during Independence Day celebrations Indian Prime Minister Modi unnecessarily invoked the non-sequitur that India supports the Pakistani Baloch struggle for recognition. In doing so, the PM invited new allegations of direct Indian involvement in Pakistani internal affairs and accomplished little more than greater deterioration of South Asian security.

Since Tehran-Kabul-Islamabad-Delhi relations continue to utilize Greater Balochistan as a pawn in national agendas, little practical intervention has taken place to affect the locals most brutalized. Only foreign investors have begun to reasonably consider the ethnic Baloch, who have thus far remained little more than a business line item. It is apparent to the current author that if these policies do not change, the people wrongfully labeled a commodity and/or talking point, will continue to violently rise up across national borders and exert their will to remind the region of their true value. Understanding and utilizing that Baloch value appropriately could in turn benefit every actor in the region to whom the value becomes clear.

Currently, rural ethnic Baloch find themselves represented by the Afghan Taliban, the Balochistan Liberation Army, and few else within Afghanistan, Pakistan, and Iran respectively. Those bodies of representation do not seek to address national concerns, but rather have commanded legitimacy by acknowledging and acting on local issues. Having done so, they maintain safe havens from which to exert violent attacks upon outside actors, the most frequent target being national governments. With the arrival of international business enterprises, these groups have expanded their targets of violence so as to garner further attention to their plights large and small. Should regional governments effectively integrate their leaders into existing government structures, local needs may appropriately be focused upon and national legitimacy gained lessening the desire for violent aims.

While ethnic Baloch have a longstanding history of conflict with their respective national governments, international businesses investing in the region are relatively new actors. The scale upon which they might be locally judged is not yet known. Though each business maintains a national affiliation, independent businesses have a much greater degree of discretion regarding with whom they choose to interact. Statistics show a relatively low involvement of Baloch laborers in the Chinese project at Gwadar, and even fewer in management positions, and none to speak of in executive advisory capacities. This has not yet proven to be the case at Chabahar nor at infrastructure projects within Nimroz and/or Helmand province, Afghanistan. Baloch inclusion within international business ventures in the region supports local means of legitimization, hence contributing to lessened security volatility.

Regardless of the previously proposed areas of intervention, the Greater Balochistan security situation demands economic compensation local Baloch believe they deserve. This is the primary concern of all Baloch in the region and is a positive step that can be taken by any independent actor. National governments and regional polities, domestic businesses and transnational corporations, private investors and quite literally anyone seeking security in this tumultuous corner of the world must begin the process of legitimately integrating continued streams of revenue and services to Baloch living in all nations concerned. From where longstanding Baloch frustration derives itself is continued historical economic marginalization. Even today, pipelines and highways direct themselves through or away from Greater Balochistan. Each passing lorry furthers local discontent. All actors involved must seek to remedy this situation or face the consequences of the increasingly armed and de facto rulers of this previously forgotten land. Guerilla warfare and acts of terrorism must not remain the Baloch’s only ways to win recognition and support.

*The author is a political analyst from the University of Chicago.