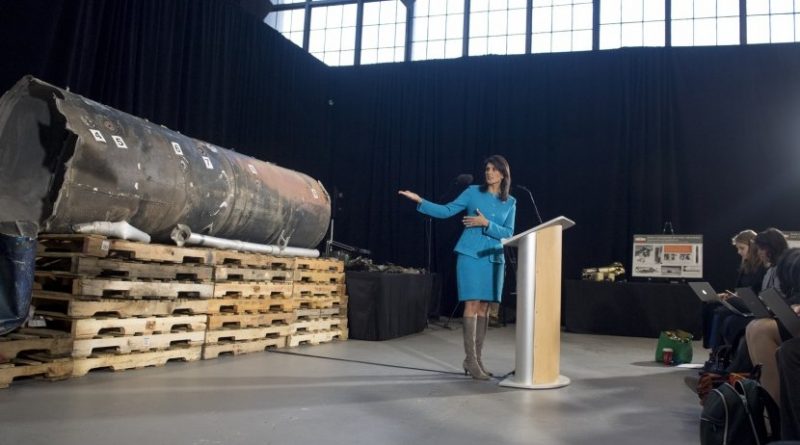 U.S. Ambassador to the United Nations Nikki Haley speaks about evidence of Iran’s destabilizing activities in the Middle East and Iran’s effort to cover up continued violations of UN resolutions at a press conference at Joint Base Anacostia-Boling Dec. 14, 2017. DoD photo by EJ Hersom

Successive U.S. administrations have warned of Iran’s malign influence in the Middle East, but lying in a hangar at Joint Base Anacostia-Bolling here is concrete proof that the Iranian regime is exporting arms to sow instability and promote violence throughout the region.

In the hangar are three intact Iranian weapon systems and debris from a fourth, recovered from the battlefields of the Middle East that can be directly traced to Tehran.

The equipment in the hangar is proof of Iran’s malicious strategy, Seal said. “We present this evidence so that we, our allies and international partners — including organizations like the [United Nations] — can be clear eyed about Iran’s activities as we work together,” Seal said.

The U.N. has repeatedly sanctioned Iran for its illicit proliferation. The United States was part of the negotiation team that finally hammered out a deal with Iran to halt its nuclear program. The other nations were China, Russia, Great Britain and France. That deal did not include the other malign activities Iran engages in around the Middle East.

Iran would like to see an Iranian crescent going from northern Iran through Iraq and Syria into Lebanon to the Mediterranean. The regime would also like to extend its hegemony throughout the Persian Gulf and onto the Arabian Peninsula. Iran is operating through and supplying the Houthis in Yemen, officials said.

The weapons systems on display were retrieved from battlefields in the Middle East by U.S. partners in the region — primarily Saudi Arabia and the United Arab Emirates, Seal said.

The four systems are a short-range ballistic missile, an antitank guided missile, an unmanned aerial vehicle and exploding boat technology. “All four include parts made by [the] Iranian government-run defense industry, and all could have only come from Iran,” Seal said.

There are pieces of two Iranian Qiam missiles launched from Yemen into Saudi Arabia. One targeted the Yanbu oil facility, and the other was aimed at King Khalid International Airport. “Only Iran makes the Qiam,” Seal said.

Another piece of equipment is an Iranian-made antitank guided missile called a Toophan. “This one was obtained by Saudi Arabia on the battlefield,” Seal said. The missile is a high-precision, direct-fire weapon with a range of about 2.4 miles. The Houthis in Yemen use them to target infrastructure and vehicles, officials said, noting that the Houthis do not have the technology to manufacture these weapons.

The display also showcases a Qasef-1 unmanned aerial vehicle operated by Houthi forces, which was recovered by Saudi Arabia. “The Qasef-1 can be used as a one-way attack drone — diving on targets Kamikaze-style and detonating its warhead upon impact,” Seal said. “Only Iran makes the Qasef-1. It is a member of the Ababil UAV family, designed and produced by the Iranian government.”

Finally, the display features the guidance system from an Iranian Shark-33 boat. This is an explosive-laden, unmanned boat used in an attack the Saudi Arabian frigate HMS al Madinah. That attack killed two and injured three and left a 5-by-6.5-foot hole in the ship’s hull, Seal said.

“There are more than half a dozen pieces of evidence demonstrating that these components are directly traceable to Iran,” she said. “What makes the Shark 33 so dangerous isn’t just that it can explode. It has a guidance system allowing it to track and hit a moving target without an operator on board, so the boat can be deployed to blow up a ship without sending someone on a suicide mission. The computer and sensors serve as that unmanned guidance system for the Shark 33 — and they are supplied by Iran.”

Finally, the boat’s onboard camera captures a still image of its location every time the guidance software turns on. “Images found on the Shark 33’s computer show it inside what is probably an Islamic Revolutionary Guard Corps facility in eastern Tehran,” she said.

The display is the first step of U.S. strategy to clearly show how Iran continues to defy the international community. “It is clear Iran is arming dangerous militia and terror groups with advanced weaponry to sow instability and violence,” Seal said. “But we are not on a road to war with Iran — just the opposite. The U.S. wants Iran to act as a responsible nation and enhance security and stability in a region that has suffered from Tehran’s efforts to undermine international order by instigating violence and political chaos.”