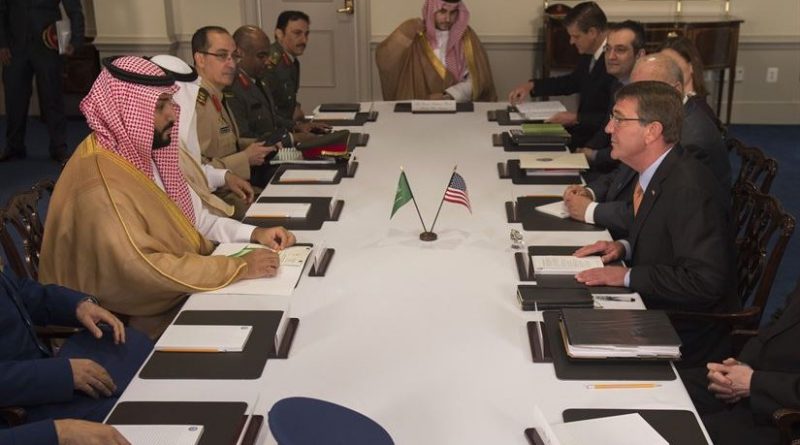 Cook said the two defense leaders talked about the fight against the Islamic State of Iraq and the Levant, events in Yemen, the recent Saudi role in successful operations aimed at al-Qaida in the Arabian Peninsula, as well as Saudi Arabia’s work to upgrade its military capabilities.

“Today’s meeting follows productive conversations in Riyadh during the [Gulf Cooperation Council] summit and many other interactions, including Minister Salman’s previous visit to the Pentagon in September,” the press secretary said, adding that Carter looks forward to continued cooperation to counter extremist threats, ISIL, and Iran’s malign influence in the region and in other shared security concerns.

“This is obviously good news for the forces who are seeking to wrest their homes from ISIL control,” he said. “But as we’ve said before, it’s also good news for efforts to stem the flow of foreign fighters into ISIL-controlled areas, and for ISIL’s ability to dispatch potential external attacks across the Turkish border.”

By encircling and eventually retaking Manbij, he added, “these U.S.-backed local forces will help reduce ISIL’s ability to threaten its innocent victims in Syria and beyond.”

ISIL Under Pressure in Fallujah

While Iraqi security forces make progress in the difficult fight to retake Fallujah while ISIL fighters try to spread their influence in that city, Cook emphasized, ISIL is under intense pressure from an international coalition that continually gathers strength. An example of the growing coalition is Poland, the latest nation to commit F-16 aircraft to the counter-ISIL campaign, he noted.

“We will continue to look for any opportunity to accelerate ISIL’s lasting defeat, again, working with the rest of the coalition,” Cook said.